All-new (X451) hatchback from Tata to rival Hyundai i20 and Suzuki Baleno; based on AMP platform; 2019 launch 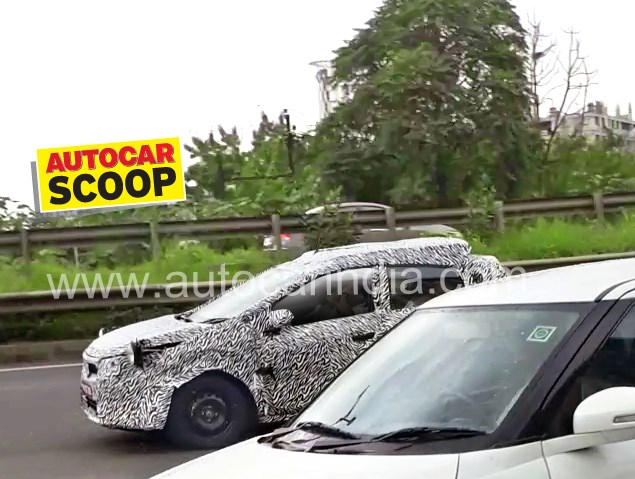 Tata Motors has begun testing its next-generation hatchback (code: X451), which was caught on camera for the first time on Indian roads. The X451 will be the first model to be built on Tata Motors’ Advanced Modular Platform (AMP), the base for Tata’s future small car range. The X451, which is positioned above the Tiago will be Tata Motors’ first premium hatch and has its sights on the Hyundai i20 and Suzuki Baleno, the segment leaders today.

The spy shots of the heavily disguised X451 reveal a silhouette not too dissimilar to the Tiago but on closer examination, the longer wheelbase and length is quite evident. According to company sources, the X451 is a good 200mm longer than the Tiago but stays under the crucial 4 metre mark to be classified as a ‘small car’ which slots it into a lower tax bracket. The hatchback currently wears dummy headlamps but the wraparound design is pretty visible. Moving on to the sides, the car has a raked and longish windshield whilst roofline tapers a fair bit at the back.  Also, visible is the placement of the rear door handle in the C-pillar, a design trend followed by the Mahindra KUV100 NXT and the upcoming Maruti Swift.  From the images, it seems there is considerable amount of space aft of the rear door which hints at a generous amount of boot space.

Under the hood, the Tata X451 is expected with the Tiago’s 1.2 three-cylinder, naturally aspirated engine but with a bit more power.  The turbo-charged version of this engine, which powers the Nexon could come later on in the lifecycle of the car. The Tiago’s 1.05 litre, three-cylinder diesel is expected to power the X451 as well but sources indicate it may get a Variable Geometry Turbo (VGT) for a higher power output.

The Tata X451 is expected in 2019 and is likely to be built at the company’s Sanand factory in Gujarat which is gearing up to be the production hub for all cars built on the AMP.