New Force Gurkha to sit on the Gurkha Xtreme's underpinnings but will come with all-new body. 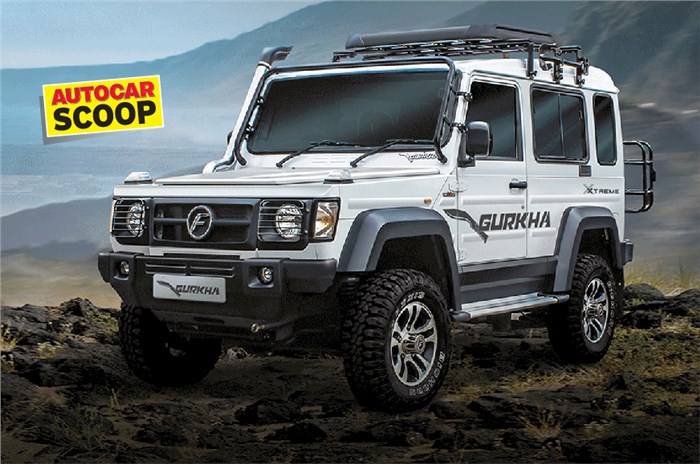 Force Motors India has been selling the current-gen Gurkha for quite a few years. The model has received multiple updates with the most recent one being the inclusion of ABS, speed warning, a seatbelt reminder and rear parking sensors, which help the off-roader comply with new government norms. While the current-gen Gurkha was able to sail through these rules with some add-ons, the model will not be able to clear the upcoming crash test norms that come into effect on October 1, 2019, especially in its current body style.

According to sources, the company has begun work on an all-new model that will replace the current-gen Gurkha. This new SUV will come with an new body shell that will clear upcoming crash test norms. Also, keeping in mind with its future direct rival, the upcoming Mahindra Thar - which is also being tested for an alleged Auto Expo 2020 unveil - the next-gen Gurkha will also come loaded with "more creature comforts" than the outgoing model, according to people in the know. We can also confirm that the new Gurkha is expected to go into production sometime around December 2019 which means along with the new Thar, the next Gurkha may also see an Auto Expo 2020 unveil.

Along with an all-new body shell, the new Gurkha will come with an updated 2.2-litre diesel engine that will clear BS-VI norms which come into effect on April 1, 2020.  This engine is actually a Mercedes-Benz- sourced unit that currently churns out 140hp. Force Motors is likely to ditch the larger but less powerful 85hp 2.5-liter engine for this model.  Apart from the new bodyshell and a BS-VI compliant engine, the new Gurkha is expected to sit on the same underpinnings which were revised with the introduction of the Gurkha Extreme that included a new multi-link suspension setup, a low range transfer case and other off-road bits.

While the Gurkha is expected to get major updates as mentioned above, the lesser Trax range might get new front styling with more strengthening that would make it clear the upcoming crash test norms.  Expect Force motors to use an updated 2.5-litre BS-VI engine on this model once the norms kick in.