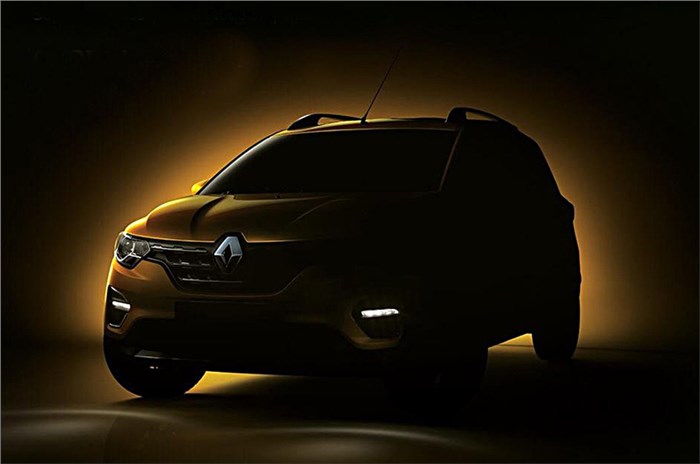 Upcoming Renault Triber will seat seven and will come with a turbo-petrol engine option.

Renault India has released a first teaser of its upcoming people mover, the Triber which is slated to see a global unveil on June 19, 2019 in New Delhi.

The teaser image partially shows the MPV’s front styling and its overall silhouette which mimics the styling of the newer Renault models like the Captur and the Kadjar SUV that is sold overseas.

The Renault Triber (earlier known by its codename RBC) gets wide stance replete with a sculpted clamshell bonnet, a large bumper – with dedicated sections for LED daytime-running lamps and chrome bits – wide headlamps that merge with the V-shaped grille and its large Renault badge takes centre-stage. The Triber will also come with roof rails, at least on the top-spec trim.

Renault will position the Triber just above the Kwid and will price it in the region of Rs 5.3-8 lakh. It is underpinned by a modified version of the Kwid’s CMF-A modular platform.

The Triber will come with dual-tone interiors and will share some of its interior bits with more expensive Renault models like the soon-to-be-launched updated Duster and the Captur. It will also come with a large touchscreen system equipped with Apple CarPlay and Android Auto, along with a few intelligent features such as driving-style coaching and a driver economy rating. The Triber, being a seven-seat people mover, will come with a dedicated AC vent for the third row of seats, which are removable to create more space to carry luggage when needed.

Safety equipment on the Triber will include dual front airbags, ABS, rear parking sensors and a speed warning system. Higher variants will come with a rear parking camera as well. There are talks of curtain airbags too, however it remains to be seen whether these make it to the production-spec model.