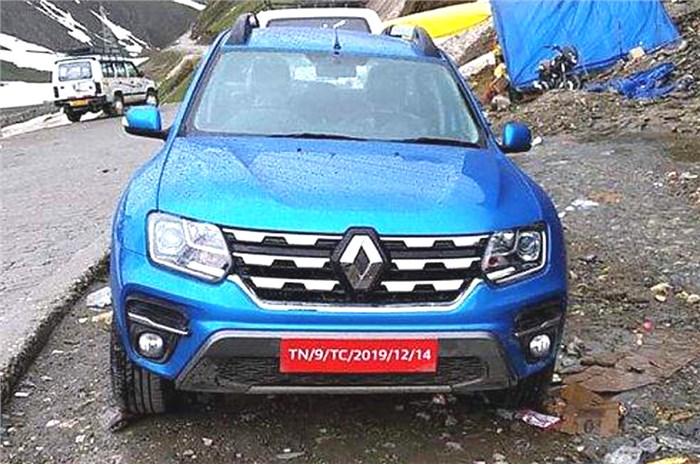 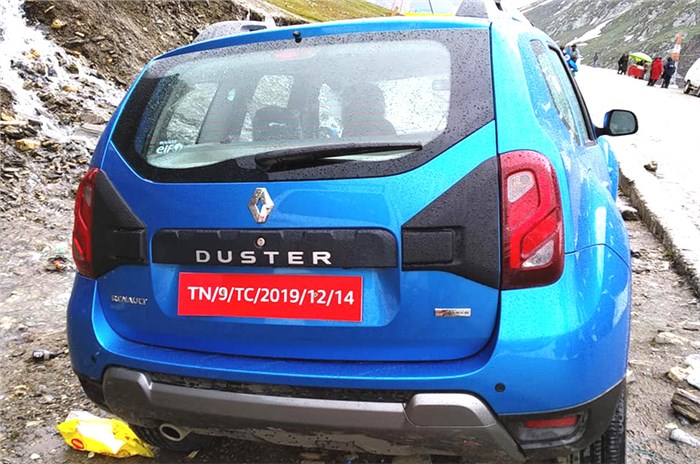 Renault India is readying another major update of the once-popular Duster SUV for our market. A few months ago, we reported about this development with a first set of spy shots of this SUV. Today, the updated Renault Duster for India has been spotted in North India in what looks like its final production form, possibly undergoing high altitude tests.

Not to be mistaken with the all-new Renault Duster (Codename: HJD) that's already on sale abroad, the SUV seen in these images is the current-gen model that’s been upgraded for the upcoming pedestrian protection standards as well as BS6 emission norms, which kick in on April 1, 2020.

While the refreshed Duster looks more or less like the earlier model, it gets reworked front styling along with a higher bonnet line that helps create necessary space between the lid and the engine components underneath. According to sources, this design tweak makes the front end of the SUV more forgiving during a pedestrian hit, which is essential to meet latest safety standards. Along with the restyled bonnet, it also gets an all-new grille, slightly altered headlamps, and a new and chunkier front bumper. The headlight design might look similar to the earlier model’s, but it now it also comes with LED DRLs and projector headlamps, which were not previously available. The new Duster's grille is now much larger and much more decorative, thanks to generous use of chrome detailing. The grille design is actually similar to that on other Renault SUVs sold abroad and is also likely to be seen on the upcoming Triber,whichwill make its world premiere on June 19, 2019.

Additionally, the refreshed Duster might get a sunroof as well, atleast on the top-spec trim. It also sports new roof rails, new-design alloy wheels and additional black plastic cladding on the tailgate, in order to give it a fresh look. On the inside, expect the refreshed Duster to come with new seat fabric, updated infotainment systemreplete with Apple CarPlay and Android Auto connectivity, and also a few connected-car features. As far as safety kit goes, expect the Duster to come standard with dual front airbags, speed warning, parking sensors and ABS as standard on all variants.

As reported by us earlier, Renault will only upgrade the 110hp variant (THP) of the 1.5-litre K9K diesel to BS6, whilst the lower-powered 85hp (HP) version is likely to be discontinued. The Duster petrol will be upgraded to BS6 norms as well and will be available on the updated model. Gearbox choices are likely to include a 6-speed manual for the diesel and a 5-speed manual for the petrol. As far as automatics go, the Duster diesel will continue to be sold with an AMT, while the petrol will solider on with a CVT gearbox.

The refreshed Duster we see here is actually the model's second major facelift, since it hit the Indian market back in 2012. Renault gave it a first major update back in 2016, but this time –thanks to the engine and safety upgrade along with better interior materials and infotainment system –"it could feel like a completely new car," according to a company source. We can also confirm that Renault will not bring the second-gen Duster to India that went on sale in Europe back in 2017.

Apart from the Duster and Triber, Renault will bring a heavily updated Kwid to our market in the coming months.