Seen testing in India, the new Beetle is more muscular and stylish than its predecessor; reworked to appeal to a wider audience. 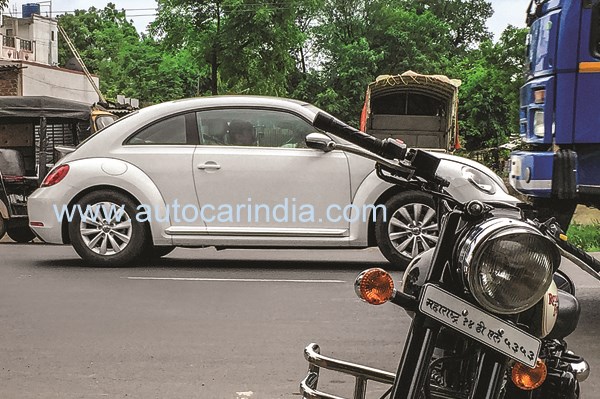 The iconic New Beetle was first launched in India in December 2009. The car, however, did not prove to be much of a success here. A halo model for the Volkswagen brand in India, the Beetle earned a reputation of being more of a woman’s car with its rather cute styling as well as the driving experience it offered. The company finally stopped importing the model a few years after its introduction.

However, Volkswagen is now considering bringing the new Beetle to India by end of 2015. Launched internationally in 2011, the new Beetle carries the same basic silhouette as its predecessor, but has been heavily reworked. It is now larger and lower than the older model. The squared bumpers, rakish roofline, integrated spoiler and larger wheels give the car a more muscular stance than its predecessor, thus reaching out to a wider audience. Also being longer and wider, it offers an improved driving experience.

In international markets, the new Beetle is powered by a family of turbocharged petrol and diesel engines, though we are not yet certain of what will be launched in the Indian market.

Undisguised test mules of the new Beetle have already been spotted testing on Indian roads.
Therefore, we can expect Volkswagen to soon confirm the iconic car’s launch. The new Beetle, like its predecessor, will be imported as CBUs, so expect the prices to be somewhere around
Rs 35 lakh. (Ex showroom, Delhi)