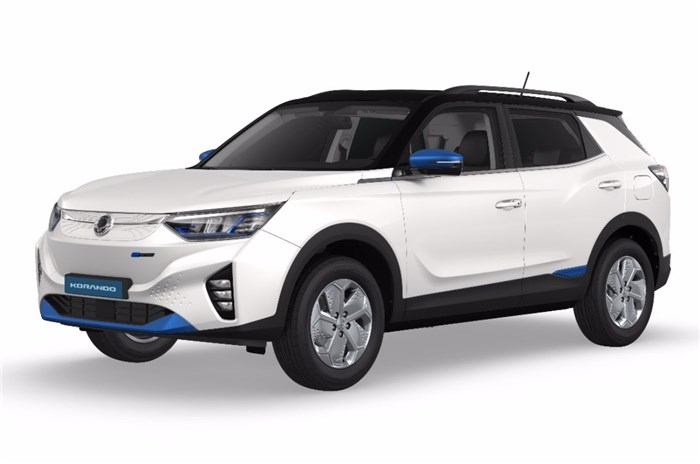 SsangYong's first electric SUV gets a 190hp motor and 61.5kWh battery, for a claimed range of 320km.

SsangYong has taken the wraps off the Korando e-motion, which is the brand’s first battery electric vehicle. The electric SUV is slated to go on sale in international markets later this year.

SsangYong Korando e-motion: Under the skin

The SsangYong Korando e-motion is built on the Mahindra Electric Scalable and Modular Architecture (MESMA) platform, which will also underpin the eXUV300 in India. The modular architecture boasts a low-set, lithium-ion battery pack and can support multi-motor configurations. The MESMA platform will also underpin SsangYong’s Tivoli EV, which was spotted undergoing testing last year.

The Korando e-motion features a 61.5kWh battery supplied by LG Chem. SsangYong claims a driving range of 420km for the EV, although this figure was reached using the outdated NEDC test cycle. The electric Korando’s real-world range should amount to around 322km under the newer WLTP test cycle.

Powering the Korando e-motion EV is a 190hp electric motor. Performance figures haven't been released yet, but SsangYong is promising "best-in-class" acceleration and a top speed in the region of 152kph.

A first glance at the Korando e-motion gives a familiar resemblance to the Mahindra eXUV300 that was shown at the Auto Expo 2020 in India. The Korando e-motion EV gets some styling tweaks to help set it apart from the conventional Korando SUV. The EV features a smoother front bumper design and a blanked-off front grille to aid aerodynamics. The Korando e-motion also sports a different set of alloys and blue detailing lower down on the front bumper, on the mirrors and at the bottom of the rear doors.

Mahindra-owned SsangYong had been incurring huge losses, which led the Indian manufacturer to stop any further investments and look for potential investors for the Korean carmaker in June last year.

However, in December 2020, SsangYong filed for court receivership after it defaulted on loan repayment of about 60 billion won (around Rs 393 crore), according to a Reuters report. The report further stated that South Korea’s trade ministry issued a statement saying, “Regardless of SsangYong’s filing for court receivership, negotiations of the SsangYong sale deal are still ongoing.”

Although SsangYong is likely to either go solo or partner up with another manufacturer for its future products, the carmaker will still utilise Mahindra’s MESMA platform for the Korando e-motion SUV. As far as its India launch is concerned, it’s highly unlikely that the Korando e-motion will be offered in India.

Mahindra, however, will launch the eXUV300 in the Indian market in the coming years.