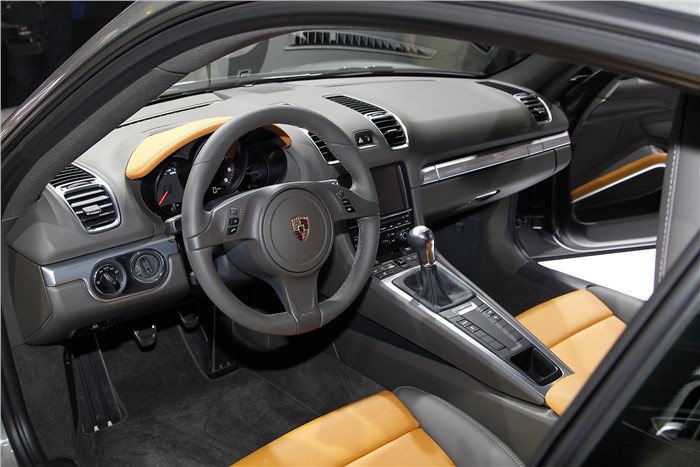 The renewal of Porsche’s sportscar line-up continues apace with the unveiling of a larger and lighter second-generation Cayman at the Los Angeles motor show.

The new mid-engined coupé adopts a redesigned platform offering improved weight distribution as well as a series of weight-saving measures that are claimed to result in a lighter car than its predecessor.

Sister car to the Boxster, which it will be built alongside at Porsche’s Zuffenhausen factory (and eventually the old Karmann factory in Osnabruck), the new Cayman receives slightly different proportions in a move that serves to stretch its silhouette and provide the basis for a larger cabin. Length is up by 35mm, width extends by a scant 1mm while height drops by 10mm over its predecessor at 4380mm, 1801mm and 1295mm, respectively.

The Cayman once again shares its styling with the Boxster. Distinguishing features include daytime running lights and indicators housed within a round unit, more pronounced rear haunches and a heavily angled liftback style tailgate at the rear.

As with its roadster sibling, the new coupé adopts an edgier appearance than its predecessor, with tauter surfacing and crisper lines, including a distinctive swage running through the doors and into larger cooling ducts ahead of the rear wheel arches. As part of Porsche's focus on weight saving, the body is predominantly aluminium. As on all recent Porsche models, the exterior mirrors are mounted on the doors rather than within the glasshouse. The wheelhouses have also increased in size, allowing Porsche to fit the range-topping Cayman S with 19 inch wheels as standard and offer 20 inch rims as an option.

The interiors are of higher quality with added levels of accommodation. The two-seat layout remains, but a longer cabin provides greater levels of seat adjustment and improved storage. Porsche claims 150 litres of luggage space in the nose and a further 162 litres at the rear in the space above the engine.

As with the Boxster, the new Cayman will be sold with the choice of two flat six engines: a new 2.7-litre and a reworked version of the existing 3.4-litre. Buyers will also be able to choose between two gearboxes: a standard six speed manual or a seven speed dual clutch unit, which can idle the engine and disengage the clutch on a trailing throttle to save fuel.

The 2.7-litre unit replaces the older 2.9-litre engine, producing an added 10bhp but 0.96kgm less torque, with 275bhp and 29.59kgm. It is sufficient to propel the 1310kg Cayman to 100kph in 5.7sec and up to a top speed of 266kph with the standard six-speed gearbox. The dual clutch gearbox extends performance, with official claims of 5.4sec and 264kph.

It will be joined from the outset by the reworked 3.4-litre engine. It delivers 5bhp more but the same level of torque as the old unit, with 325bhp at 7400rpm and 37.74kgm at 4500rpm. This is enough to endow the 1320kg Cayman S with an official 0-100kph time of 5.0sec in six-speed manual form and 4.7sec with the dual clutch gearbox, together with corresponding top speeds of 284kph and 282kph.

Underpinning the new Porsche is the same aluminium-intensive chassis used by the Boxster. It receives a 60mm increase in the wheelbase over the platform used by the outgoing first-generation Cayman at 2475mm. The tracks have also been extended by 36mm to 1526mm at the front and 5mm to 1540mm at the rear, giving it an even more confident stance.

As with the Boxster, the new car also adopts an electro-mechanical steering system and comes with the option of Porsche's PASM (Porsche Active Suspension Management) that offers differing damping, throttle and steering characteristics. The Cayman wears 18-inch wheels – 8 inches wide up front and 9 inches at the rear, shod with 235/45 and 265/45 tyres. The 19 inch wheels of the Cayman S are 8 inch wide up front and 9.5 inches at the rear and come with lower profile 235/40 and 265/40 rubber. The standard steel brakes are 315mm in diameter for the Cayman and 330mm for the Cayman S up front, with the two sharing the same 299mm rotors at the rear.

The reduction in height is said to provide a lower centre of gravity – something Porsche claims is at the heart of improvements in the Cayman’s overall dynamic ability. Nothing is official just yet but insiders suggest the Cayman S is up to 10sec per lap faster around the Nürburgring than the old model.