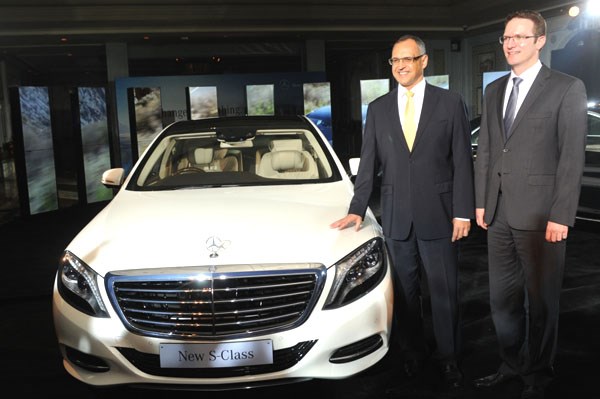 Mercedes-Benz has launched the all-new 2014 S-class (W222) sedan in New Delhi at Rs 1.57 crore (ex-showroom, Delhi) for the S 500 petrol, the only variant on offer at launch. Each top-of-the-line S 500 variant will be imported as a CBU from Germany. Mercedes-Benz has also stated that all 125 units of the limited Launch Edition of the new S-class sedan have already been sold, and that all orders placed henceforth will be delivered only in April, 2014.

For five generations, the S-class has been Merc's technological warhorse, debuting the latest and most advanced in gadget wizardry. The new Mercedes-Benz S-class has the difficult task of not just replacing the old S-class, but also of picking up the baton from the now defunct Maybach luxury brand. On the inside, as you might imagine for an S-class, the car is packed to the gills with advanced tech. A 24-speaker Burmester audio system, reclining, massaging, heated and cooled seats, Bluetooth and WiFi connectivity, night vision assist, adaptive cruise control, full LED headlamps, a panoramic sunroof, four-zone climate control and an air suspension to name a few. Plus, since only the long wheelbase version is sold in India, legroom at the back is quite outstanding.

Under the hood of the Mercedes-Benz S 500 sedan sits a twin-turbocharged 4,663cc V8 petrol engine that puts out 453bhp and 71.38kgm of torque, and it is mated to a seven-speed automatic gearbox.

Mercedes-Benz also intends to introduce a locally assembled diesel version – the S 350 CDI – at a later stage, which will be priced significantly lower, but the car could only be available in the latter half of 2014.