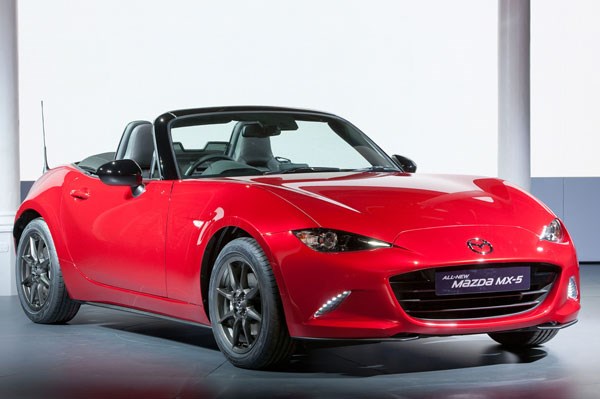 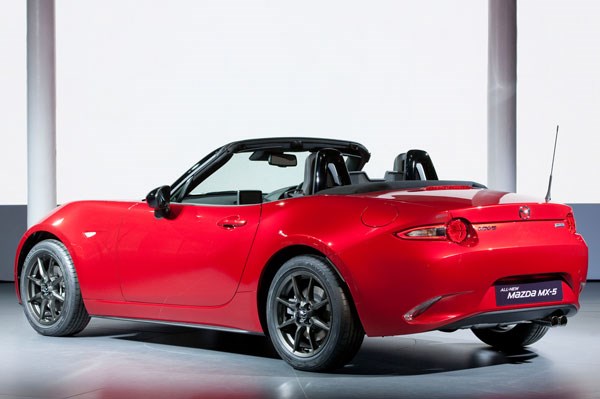 The Mazda MX-5 is lighter and smaller than the car it replaces; powered by a SkyActiv engine.

Mazda has revealed the new MX-5. The new version of the 25-year-old rear-drive roadster is built from the ground up and will enter international markets in July 2015. It’ll have a brand new rear-wheel-drive chassis and two new petrol engines; all built using Mazda’s SkyActiv technology.

The Mazda MX-5 is lighter and smaller than the car it replaces. Mazda isn’t saying exactly what the new weight figures are but it will admit to savings "of around 100kg", meaning that the base model should end up being just a shade over one tonne. As well as using SkyActiv design to cut weight from the Mazda's chassis, the bonnet, boot and front wings are now made from aluminium and a lighter material has also been used in the soft-top hood construction.

Mazda has only confirmed that the new MX-5 is powered by a newly developed SkyActiv engine that will be longitudinally mounted in the nose. However, there are likely to be two new direct-injection petrol engines on offer; a 1.5-litre and a 2.0-litre. Both are reworked versions of engines already powering Mazda hatchbacks and are likely to offer around 140bhp and 180bhp respectively.

The Mazda MX-5 has double-wishbone front suspension and a multi-link rear end. The engine now sits lower and further back than previously, lowering the centre of gravity.

The design work was mainly carried out at the Mazda’s Japanese headquarters.

The new Mazda MX-5 is a two-seater and it allows lowering the manually operated soft-top hood with one hand. You sit low in the car but the view out is claimed to be superior as the bonnet has been lowered and the A-pillars and windscreen header rail have been made thinner.

The centre of the dash top is dominated by an infotainment screen, derived from the Mazda 3 hatchback. It’s controlled by a rotary knob, nestling next to the conventional handbrake. There are also more soft-touch surfaces and more stowage space. More attention has also been paid to keeping passengers from being buffeted whilst driving with the hood down. There are headrest-mounted speakers, intended to help maintain music volume with the roof down.