The hypercar will use an F1-derived 1.6-litre V6 engine; to have an electric-only range of 30km. 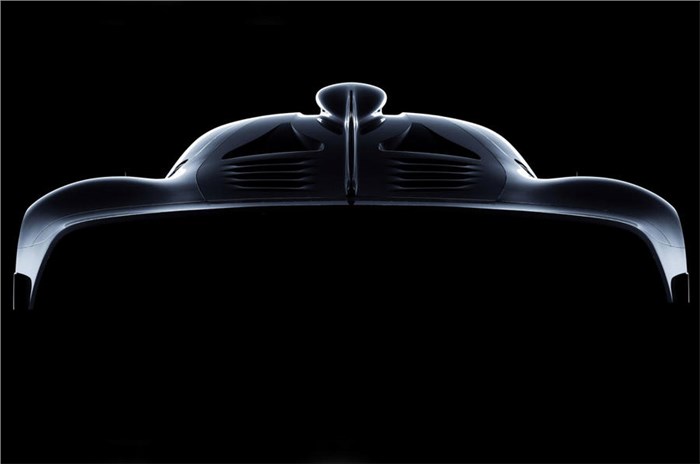 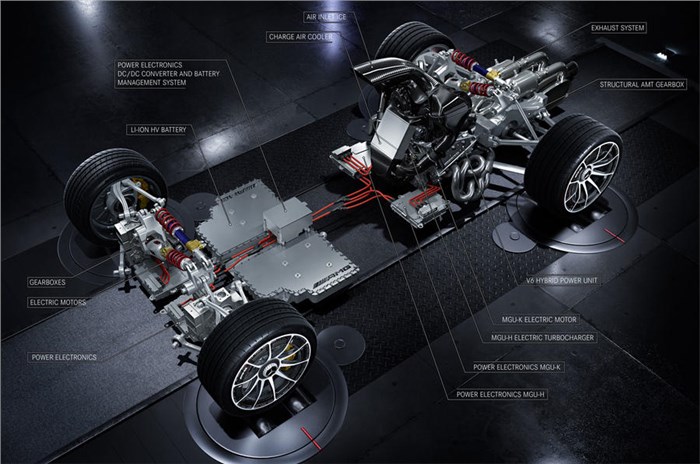 Mercedes-AMG has revealed the powertrain specifications of its upcoming hypercar. Codenamed Project One, the hypercar will be powered by a road-adapted version of the 1.6-litre V6 engine used in Mercedes’ W08 EQ Power+ Formula 1 racer and feature the MGU-K and MGU-H motor generator units as well.
Again in line with the Formula 1 car, Project One's gearbox forms part of its structure. However, it will be an automated manual gearbox.

The lithium-ion batteries powering the motors that drive the Project One's front wheels are placed low and towards the front of the structure, keeping the centre of gravity down and evening out the weight distribution of the whole set-up.

AMG is targeting a weight of 1,300kg for the car and a 1,014hp output for its powertrain. This will make it competitive with the likes of the Ferrari LaFerrari, McLaren P1, Porsche 918 Spyder, and the Aston Martin and Red Bull-developed Valkyrie. The car will have an electric-only range of 30km.

The front wheels can be driven individually, so torque can be distributed selectively – a technology already used in the Mercedes-AMG SLS Electric Drive. Called AMG Torque Dynamics, it is essentially extreme active torque-vectoring.

The hypercar is set to be revealed at the 2017 Frankfurt motor show in September, ahead of going on sale internationally in 2018. AMG boss Tobias Moers said less than 275 versions of the Project One would be made. Mercedes expects all cars to have been allocated before the launch.

"It will be up to local-market management to decide who gets a car," said Moers. "Beyond that, we expect to develop a special programme to support owners, but using the car will not be as complicated as many prospective customers seem to expect. Because of the F1 technology in the car, people are asking me ‘will I need a support crew or dedicated fuel to run it?’, and my answer is always no. This will be a street car. You keep it plugged in the garage. You fill it with '98' when you buy fuel. That's it."

Mercedes boss Dieter Zetsche added: "Our aim is for [the Project One] to be the first street legal car with an F1 engine," he said. "Secondly, that it is perceived as the ultimate sports car. We have relatively good indications that this is possible."