Mercedes-AMG Project One hypercar debuts with 1000hp at Frankfurt

Mercedes-AMG has used an F1-based powertrain to propel the two-seater to 200kph in a claimed 6.0sec and beyond 350kph. 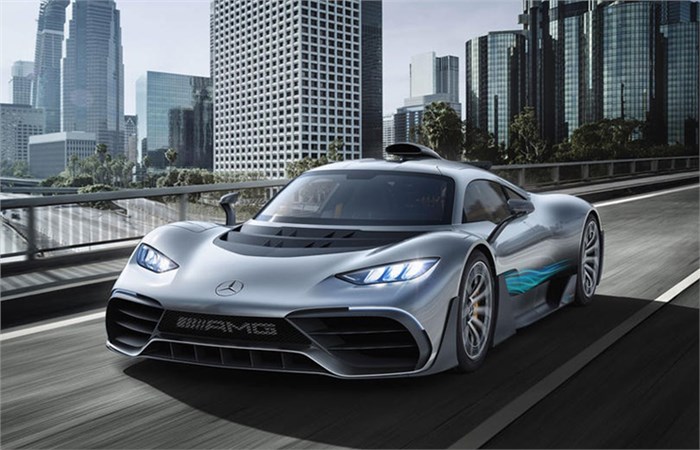 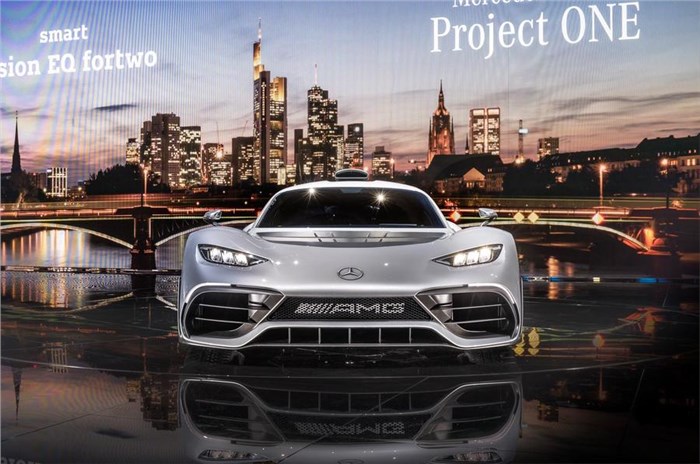 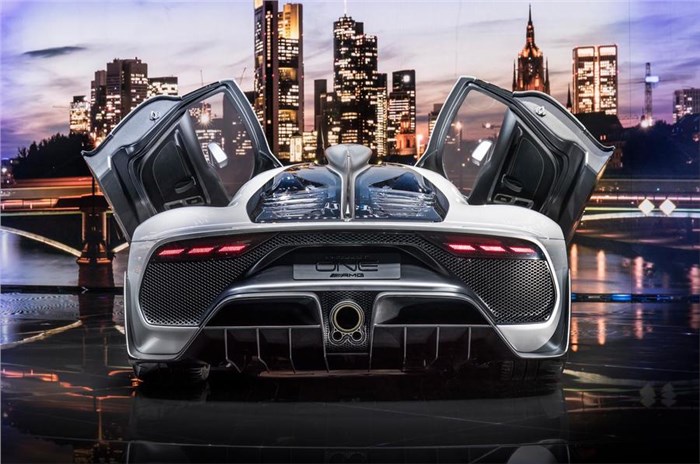 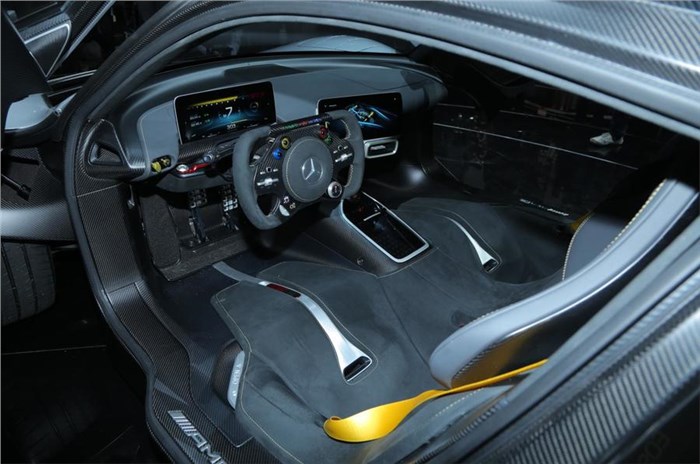 After many teasers, the Mercedes-AMG Project One hypercar has been officially unveiled at the Frankfurt motor show. A direct link between the German manufacturer’s Formula 1 activities and road-going models, the 1000hp two-seater coupe uses a heavily reworked turbocharged, 1.6-litre, V6 petrol engine and electric motor set-up used by the W08 race car, as driven by Lewis Hamilton and Valtteri Bottas in 2017 season.

Mercedes chairman Dieter Zetsche said: "This vehicle will make all the performance cars at Mercedes and AMG look small. In 40 years I have never witnessed as much hype at Mercedes as there was with this car. After we showed the silhouette at Paris we had calls the next day to buy them.

"AMG's future does not depend on petrol, but on hybridisation and electrification too. This car gives an outlook for the future of AMG. Our task is not just to reinvent the automobile but to redefine mobility."

Lewis Hamilton, who drove the car out onto its display at Frankfurt, added: "No-one's really done this [making a race car for the road] until now."

Mercedes-AMG claims that the carbonfibre-bodied Project One has a 0-200kph time of 6.0 seconds and a top whack of more than 350kph. However, Mercedes-AMG boss Tobias Moers says final certification has yet to be carried out on the new coupé because there is still a further 18 months of development before the first customer cars are due to arrive.

“The hypercar is the most ambitious project we have ever undertaken,” Moers told our sister publication Autocar UK. “It represents a highlight in the strategic development of Mercedes- AMG. We call it a concept, because obviously we don’t have any certified data for things such as emissions and so on [at the moment]. The finished car will be pretty similar.”

The electrically powered front axle means the hypercar is a four-wheel drive model in its more performance focused driving modes. A large lithium ion battery is mounted low in the coupe’s carbonfibre body structure and can provide up to 26km of pure electric range.

The battery can be recharged using kinetic energy created under braking and coasting and by plug-in means via an 800V electric architecture.

There will only be 275 units of the production model, only with left hand drive, with the first car scheduled to be delivered during the second quarter of 2019.

The Project One is a combined effort of AMG in Affalterbach, Germany, its High Performance Powertrain sister company located in Brixworth and the F1 team in Brackley.

“It elevates the standard for what is technically possible to a whole new level with a combination of performance and efficiency that is the absolute benchmark,”  said Moers.

AMG has now confirmed that the first in a series of running prototypes of the Project One are being tested on the road.

The design of the hypercar is influenced by the cooling requirements of its F1-sourced powertrain and aerodynamic needs. Based on a carbonfibre monocoque structure, every air intake and panel has been designed to maximise air flow and generate downforce. A large wing deploys from the rear of the at a set speed to provide more downforce.

On the inside, the Project One seats two in what Moers described as a “highly functional” interior. It borrows various features from the W08 race car’s cockpit including a digital instrument display, a newly developed steering wheel with LED lights that signal the engine revs together with controls for the individual drive modes and suspension settings. A digital display takes the place of the interior mirror, providing real- time video of the rear view via a so-called MirrorCam function.

The F1-derived, mid/rear- mounted, turbocharged 1.6-litre V6 petrol engine, developed at Mercedes-Benz’s High Performance Powertrain division in Brixworth, has been tuned for everyday use and is backed by four electric motors.

One of them drives the turbocharger as a torque filler. Another larger electric motor is integrated directly into the driveshaft at the rear in a layout similar to the MGU-K (motor generator unit — kinetic) used in the current generation of F1 cars. The remaining two motors sit within the front axle, providing drive to the front wheels.

The four-valve-per-cylinder combustion engine sets new series-production standards with an ignition cut-out set some 2000rpm higher than any existing road car’s, at 11,000rpm. The front electric motors are also claimed to spin some 30,000rpm higher than those of any current road car, at 50,000rpm.

In a bid to give the new hypercar the same sort of throttle response found in an F1 car, the Project One’s electrically driven turbocharger has a similar operating procedure as the MGU-H (motor generator unit — heat) used within the drivetrain of the 2017 F1 car. It is claimed to reach 100,000rpm on wide- open throttle loads.

The MGU-K converts mechanical and heat energy into electrical energy that can be stored for later deployment and the MGU-H takes heat from the exhaust and uses it to create electrical energy.

AMG claims the turbocharged V6 mill puts out more than

The V6 petrol engine is claimed to produce more than 870hp, with the driveshaft- mounted electric motor contributing an additional 163hp. The two electric motors on the front axle send up to 326hp to the front wheels and features a similar torque vectoring function to that developed by AMG for the earlier SLS Electric Drive.

Altogether, the combined output of the Project One is more than 1000hp, most of which is sent to the rear-wheels via a newly developed hydraulically operated eight-speed automated gearbox with remote steering- wheel-mounted shift paddles. It offers the choice of either automatic or manual modes.

Seeing as Mercedes-AMG claims that the total weight of the powetrain is 520kg, Moers said rumours suggesting it would hit the scales at close to 1000kg are premature.

The Project One is underpinned by a race-grade chassis with an adjustable multi-link set-up with pushrods both front and rear — the latter attached directly to the engine block. It is allied to standard 19-inch front and 20-inch rear centre- lock alloy wheels shod with 285/35-profile tyres up front and 335/30s at the back.

“You open the door, hit the start button and drive. Easy,” he said. “We have the most modern technology. The GT R is very innovative regarding ESP functionalities. The hypercar is going to have the next level. Controlling two individual motors on the front axle: we know how that works. We initially developed it with the SLS Electric Drive. Everything about torque vectoring: we know what we can do.”