Ciaz facelift teaser out; market launch to now take place only in second half of August 2018. 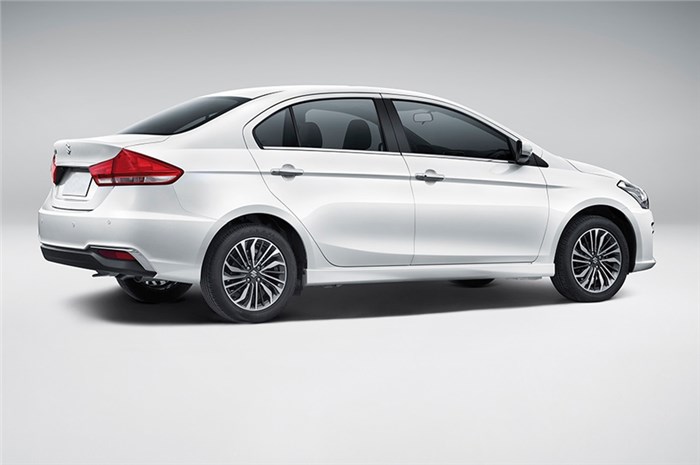 The Maruti Ciaz facelift, which was earlier slated for a market launch in early August 2018, has now been pushed back to second half of next month. According to sources, the launch event has been postponed due to a rival company having an event during the same time period. Additionally, this delay would also help Nexa dealers clear unsold stocks of the outgoing Ciaz sedan which is already offered at discounts ranging from Rs 75,000 to as high as Rs 1.3 lakh (depending on inventory).

The refreshed Ciaz will face competition from the Honda City, the Hyundai Verna and the Toyota Yaris.  Key updates to the Ciaz facelift will be its new-look fascia with a wider grille, and a reprofiled bumper and hood. As seen from the spy shots, the refreshed Ciaz now looks much more rounded when viewed from the front – a clean departure from the angular-styled nose on the outgoing car.

Maruti will add LED headlamps and tail-lamp inserts, along with daytime running lights. The refreshed Ciaz will also get new-look alloy wheels and a grille that gets styling bits similar to the all-new Ertiga MPV currently sold in Indonesia.

As far as cabin updates go, the car will get a lighter shade of faux-wood and a slight tweak in the overall interior shade – there will be no change to the dashboard layout or the steering wheel. Additionally, the refreshed Ciaz will get an all-new instrument cluster with a new multi-info display, which could be similar to the one seen on the Baleno.

Under the hood, an all-new 104hp, 1.5-litre petrol motor will see duty in the Ciaz facelift, at first – the same motor that will make an appearance in the new Ertiga. What’s more, the new Ciaz 1.5-litre petrol will receive smart-hybrid tech similar to the SHVS system seen on the current Ciaz diesel.

The SHVS system comes with start-stop technology and uses an integrated starter generator (ISG). The ISG functions as a battery charger during braking and acts as the starter motor when the start-stop technology is in use. SHVS-equipped cars also get an electric boost via the Engine Power Assist (EPA) system, where the ISG supplements the engine’s power during acceleration. This system will continue to be offered on the unchanged 1.3-litre diesel engine powering the refreshed Ciaz.

This new petrol-hybrid system could also make its way to the next-gen Ertiga, which is likely to be Maruti’s next big launch, later this year. Maruti is also working on an all-new, in-house, 1.5-litre diesel engine which will be introduced in one of its models at a later stage.