First Kia dealerships in Kerala to come up at Kannur, Calicut and Malappuram. 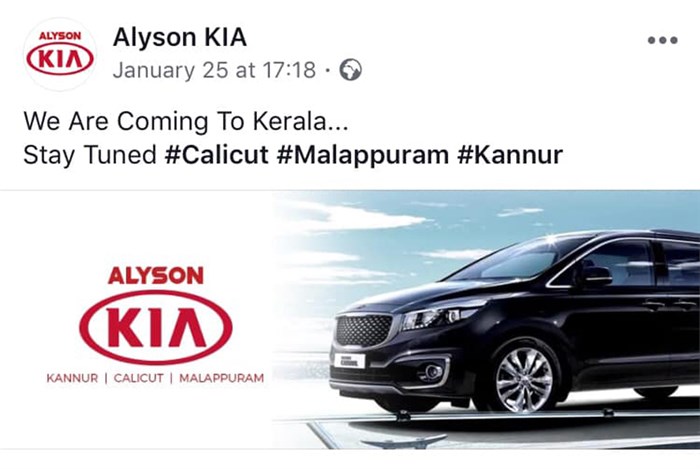 Kia Motors India is set to start its India innings with the launch of the SP SUV in August 2019. The trial production at Kia’s Andhra Pradesh facility has commenced, and the carmaker has also started work on setting up its dealer network.

Kia will have a pan-India presence from day one, with dealerships in 35 cities initially. Kerala-based Alyson Group recently announced on their Facebook page that it will be the dealer principal for the Korean carmaker in Kannur, Calicut and Malappuram. Alyson Group is an established name in two-wheeler and four-wheeler retail with multiple showrooms already in their fold.

Other cities in Kia's Kerala plan include Cochin and Trivandrum. The dealerships will conform to Kia’s global Red Cube look. Company officials have also stated that they will have a wide reach via touch points that would offer test drives and service solutions.

The first model to be sold via the dealerships will be the Kia SP SUV and, over time, the product line will grow to include the Carnival MPV, a compact SUV and possibly even a cross-hatchback.

The SP SUV price is expected to be between Rs 10-16 lakh (ex-showroom). When launched, it will take on the likes of the Hyundai Creta, Nissan Kicks and the Renault Captur.