Thanks to the sales of the Seltos, Venue and Hector, the utility vehicles segment is the only one to post growth during this period. 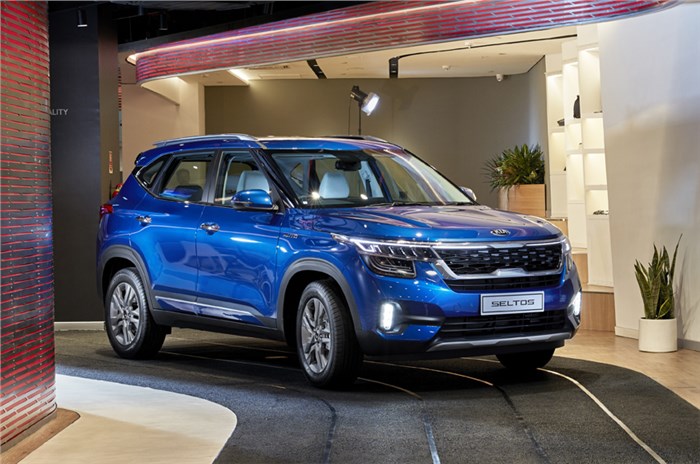 The SUV market in India is firing on all cylinders – and how. Yesterday, apex industry body SIAM released industry sales data for CY2019, December 2019, and April-December 2019; and the sole sub-segment in positive territory is that of utility vehicles. In fact, it is thriving despite the hugely dampened market conditions, as seen below:

If it weren't for the sizeable 34.25 percent contribution from the UV segment to the overall passenger vehicle (PV) market, the PV segment – which is down 16.40 percent (21,17,837) in April-December 2019 – would have been floundering even more.

SUVs clearly are good news for the beleaguered Indian automobile industry, which has seen over a year of overall sales decline – a trend which looks to continue till the fiscal year-end, and beyond. What's driving this growth is a clutch of recently launched SUVs, from Kia Motors India (Seltos), Hyundai Motor India (Venue), MG Motor India (Hector) and Renault India (Triber). Unsurprisingly, their robust sales have helped these OEMs increase their UV market share and also eat into established UV OEMs' share – this, at a time when the chips are down for the rest of the industry.

If you take a close look at the detailed market share statistics table in this story, it's not surprising to find that of the 17 OEMs in the UV market, only four (Hyundai, Kia, MG and Renault) have increased their market share.

Leading the SUV charge for the Chennai-based Hyundai Motor India is its first-ever compact model, the Venue. Launched on May 21, the Venue and the well-established Creta have sold a total of 1,38,211 units, accounting for 99.31 percent of total UV sales of 1,39,165 units.

The Venue, which comes with three engine options – a 90hp, 1.4-litre diesel motor, an 83hp, 1.2-litre naturally aspirated petrol unit, and a 120hp, 1.0-litre turbo-petrol unit – is the volume driver. In the eight months since its launch, the compact SUV has been a regular in the Top 5 UVs chart.

Kia Motors, Hyundai's sister company, is having a super run in India. In a scant five months since its launch on August 22 last year, the Seltos has grabbed a 6.25 percent UV market share with total sales of 45,226 units. This constitutes a monthly average of 9,045 units – absolutely splendid going for a brand-new name in the Indian market. Reason enough to give it a UV market share of 6.23 percent, just behind Tata Motors (6.51 percent), Toyota Kirloskar Motor (7.18 percent) and ahead of Ford India (4.61 percent) and Renault India (4.39 percent). Kia is currently sixth in the total UV market share rankings in India.

In November, the Seltos notched its best monthly sales yet – 14,005 units – and was India's No 1 UV for two straight months in October and November. It lost out in December, most likely to the Maruti Vitara Brezza.

Kia Motors India says it has received over 80,000 bookings for the Seltos till now and, to ensure timely deliveries, has started a second shift at its manufacturing facility in Anantapur to ramp-up production. The company says it will not close bookings, as the plant is fully capable of meeting the surging demand for the Seltos.

MG Motor India, the other new car brand that entered India, is seeing increased sales traction for its Hector SUV. The Hector, which comes in four diesel variants, two petrol-manual variants, two petrol-automatics and three petrol-hybrids, has sold a total of 15,930 units, which gives it a UV market share of 2.20 percent – a strong performance for a new brand in India.

MG Motor India has close to 40,000 bookings in hand, selling out the midsize SUV till February 2020. It now aims to clear the entire backlog till February with a second production shift at its plant in Halol, Gujarat having begun this month. On October 22, four months after it launched the SUV in India, the company achieved the milestone of rolling out the 10,000th Hector.

New competition always brings challenges and the clutch of new models from Hyundai, Kia, MG and Renault has had an impact on established UV players. Club the Korean family of Hyundai and Kia and what you get is a combined market share of 25.41 percent – or one-fourth of India's UV market. While Maruti and Mahindra control two-fourths (45.55 percent), 13 other players fight for bits and pieces of the last portion.

Three months left in this fiscal and about 75 days for the BS6 mandate to kick in. Before that, there is Auto Expo 2020, which will see a lot of new SUV products. This is one vehicle segment that will continue firing on all cylinders in 2020. 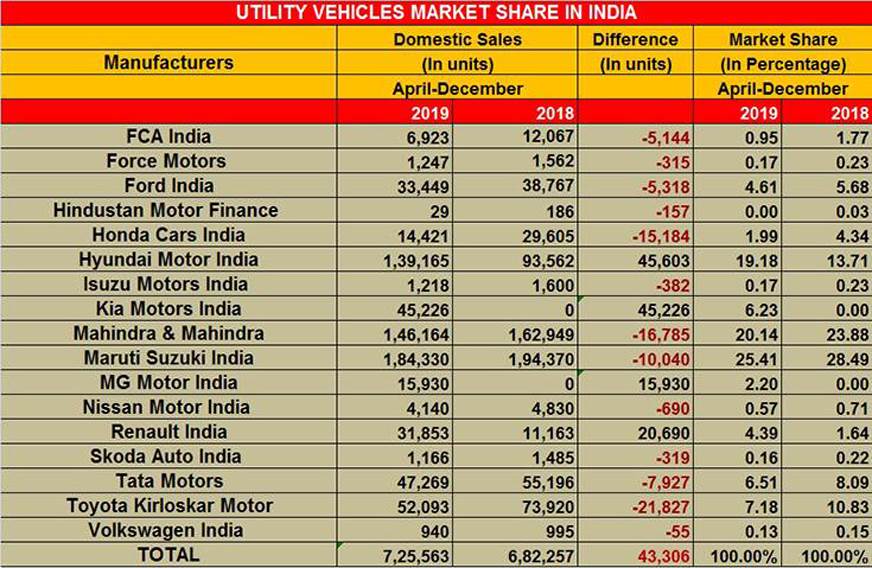