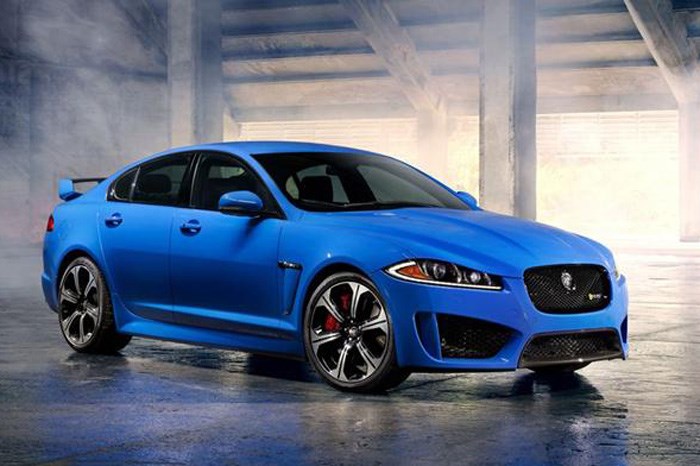 This is Jaguar’s fastest ever saloon car: the new XFR-S, a more powerful, more hardcore version of the firm’s XFR. It has been revealed at the Los Angeles motor show.

The new super-saloon gets the 5.0-litre supercharged V8 from the XKR-S, which gives it 39bhp more than the XFR. Although the XFR-S is the quickest saloon that Jaguar has built, the official performance figures indicate that it isn’t quite as rapid as the more expensive XKR-S.

The saloon reaches 100kph in 4.6sec, whereas the coupé gets there in 4.4sec. However, it’s likely that the car will, in real-world conditions, accelerate faster and produce a 0-100kph time approaching that of the coupé.

In addition, the car’s 0-160kph time is likely to be “below 9sec”, according to Jaguar’s chief vehicle engineer, Mike Cross. That would put it very close to the XKR-S’s time of 8.6sec. Top speed is limited to 186mph.

Much of the work carried out in creating the XFR-S has its roots in the development of the F-type. “There’s more F-type learning than there is XKR-S,” said Cross.

So the car has the F-type’s Quickshift transmission, in place of the standard six-speed automatic. Quickshift was first unveiled in the new F-type and gives the XFR-S an eight-speed gearbox.

Jaguar claims that Quickshift allows faster gearshifts than the standard automatic and enables the car to provide smooth changes in traffic and rapid shifting under harder driving. It features what Jaguar calls Corner Recognition, by which it can detect when the car enters a bend and hold the right gear for leaving the corner. Fitting Quickshift also means that Jaguar has been able to equip the XFR-S with stop-start.

Jaguar’s engineers have uprated the XFR’s suspension to improve the car’s handling. The suspension is 30 per cent stiffer than the XFR’s, and spring rates have been increased by the same amount. XKR-S suspension components have been used at the front, along with new wheel bearings. The rear has a completely new subframe.

As with the XKR-S, the electronic control systems from the R model have been uprated. The Adaptive Dynamics programme (using continuously variable dampers to control body movements) has been altered so that damper rates are much firmer in Dynamic mode.

In addition, the throttle responses have been changed, the electronic rear diff is reworked to allow for the increased torque output, and the traction control now allows the driver to push the car further before it intervenes, or it can be turned off altogether.

Much of the car’s exterior changes have a beneficial aerodynamic or cooling effect. There are larger air intakes in the front splitter that also features a carbon section said to improve airflow at high speeds. A no-cost choice of two rear spoilers is offered, the larger one being standard. Jaguar claims a 68 per cent reduction in overall lift as a result of the modifications.

Inside, the car gets what Jaguar calls “carbon-effect leather,” used on R-S models only, and stitching in red, blue or ivory, which is repeated across the top of the dash. An R-S-model-only aluminium trim is fitted to the dash.

Although Jaguar is not specifying the car’s weight yet, it is expected to be very similar to an XFR’s 1891kg. The use of carbon in the body and the lightweight construction of the larger wheels has helped to keep the weight down.