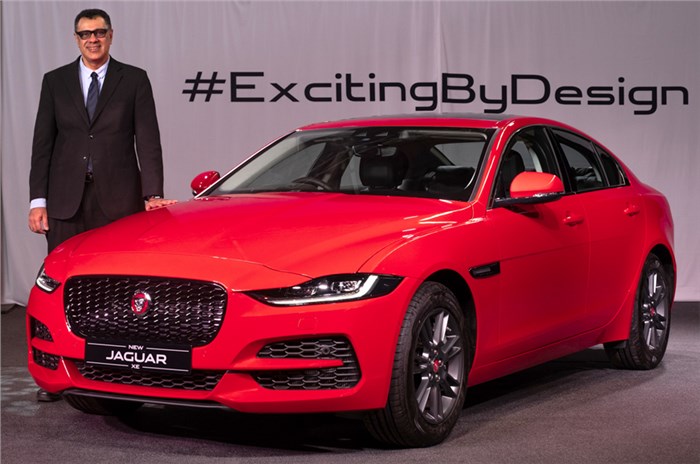 Jaguar has launched its refreshed XE sedan, with prices starting at Rs 44.98 lakh. Revealed in international markets earlier this year, the XE facelift gets cosmetic and interior tweaks to help it hold its own with newer rivals like the BMW 3 Series, Mercedes-Benz C-class and Audi A4.

The XE facelift is available in two variants and with two engine options, giving you a total of four versions to choose from. The table below has the details:

Interestingly, Jaguar has done away with a 'base' variant for the XE. The range now starts at the S trim which is equivalent to the former Prestige trim, while the SE trim takes the place of the Portfolio.

The revised styling on the updated XE has been inspired from its stablemates like the F-Type sportscar and the all-electric I-Pace SUV. The front end sports a sharper bumper and tweaked LED headlights, while the rear gets a new bumper with a reworked diffuser lower down and updated LED tail-lights. The XE facelift's alloy wheels get a new design too.

While the dashboard layout remains more or less identical, the facelifted XE gets more tech than before. A fully digital instrument cluster (in the top-spec SE variant), a larger touchscreen for the infotainment system, and another touchscreen unit for the climate control and seat functions are on offer, similar to that on newer Land Rover models. Even the rotary gear-selector knob has been replaced by a more conventional gear selector. The overall quality of the cabin has seen an improvement too, with bits like the hard plastics being replaced with higher-quality soft plastic.

The XE facelift continues to run the same engines as its predecessor, albeit in BS6 guise. A 2.0-litre, four-cylinder turbo-petrol engine is on offer, which produces 250hp and 365Nm of torque, and there's a 2.0-litre, four-cylinder, turbo-diesel engine which puts out 180hp and 430Nm of torque. Power is sent to the rear wheels via an 8-speed torque-converter automatic gearbox.

2019 has been a relatively quiet year for the British carmaker, with the XE facelift being the only launch. In 2020, however JLR India has a slew of new models incoming that include the new Defender and the all electric Jaguar I-Pace SUV.

Stay tuned for our review of the Jaguar XE facelift, which will go live on Sunday (December 8) at 1pm.