E-Type 60 Edition to be finished to match the prototype coupe and drop-top that were revealed at the Geneva motor show in 1961. 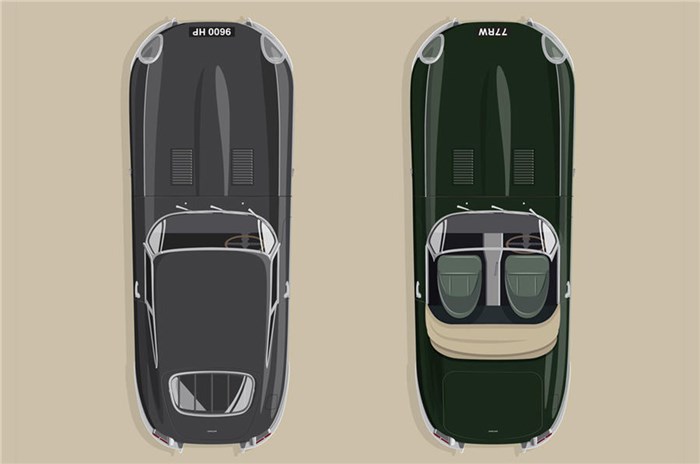 The iconic Jaguar E-Type is set to return in limited numbers as the carmaker looks to celebrate the model’s 60th anniversary. Jaguar is set to roll out a limited run of '60 Edition' resto-mod E-types based on the original coupé and drop-top.

Dan Pink, director of Jaguar Classic, said, “The Jaguar E-Type is a genuine icon, as sensational today as the moment it was unveiled in 1961. It’s a testament to the E-Type’s advanced design and engineering that it can still be enjoyed and admired as passionately almost 60 years on.”

“The E-Type 60 Collection is a lasting tribute for E-Type admirers, honouring the car’s legacy and the achievements of the team that created it – many of whom have descendants working for Jaguar Classic today, expertly restoring, maintaining and future-proofing enjoyment for generations to come,” he went on to say.

How many of the Jaguar E-Type 60 Editions will be produced?

Jaguar’s in-house Classic department will create six matching pairs – coupés and drop-tops – of E-Types at its Warwickshire headquarters. Jaguar Classic will only offer the model in pairs. The option of buying a single model will not be available. The carmaker has already acquired the 12 donor cars to be used to create the 60 Edition models.

What makes the limited editions special?

Each pair of E-Types will be styled to pay tribute to the two cars used for the model’s unveiling at the Geneva motor show 1961.

Each pair of E-Types will comprise a grey fixed head coupé modelled on a prototype registered ‘9600 HP’ – the example driven from Coventry to Switzerland the night before the E-Type was unveiled – and a green Roadster.

The drop-top will be finished to match '77 RW’. The ‘77RW’ was driven non-stop overnight from the firm’s factory to Geneva by chief test driver Norman Dewis following an unprecedented demand for passenger rides at the motor show.

The bespoke 60 Edition specification includes specially formulated ‘Drop Everything Green’ and ‘Flat Out Grey’ paints (named in reference to the story behind the car’s launch) and commemorative design details created in partnership with Jaguar design director Julian Thomson.

What of the engine?

Both variants will be powered an original-specification 3.8-litre straight-six engine producing around 223hp. When the E-Type was launched, this powertrain took both 9600 HP and 77 RW to a 241kph top speed in the first media road tests.

How can you get a pair?

The cars are available to order via direct contact with Jaguar Classic, with production beginning in March 2021. The firm has not confirmed pricing, but given that Jaguar Classic's Reborn 3.8-litre E-Type comes with a price tag of around GBP 315,000, (Rs 3.07 crore approx) the exclusive pair can be expected to cost around GBP 650,000 (Rs 6.34 crore approx).

The announcement of the restoration project comes just over a week after Jaguar marked what would have been the 100th birthday of Norman Dewis, who died in 2019, aged 98.

Dewis played a central role in the development of several iconic Jaguar sports cars during his 33-year career with the firm, including the Mk1 and XJ, as well as successful racers such as the C-Type, D-Type and XJ13 prototype.

What’s to come from Jaguar in India?

Also on the cards for India is Jaguar's I-Pace electric SUV.