A survey conducted by insurance comparison website The Zebra shows that iPhone users are more likely to be distracted while driving than their Android counterparts. 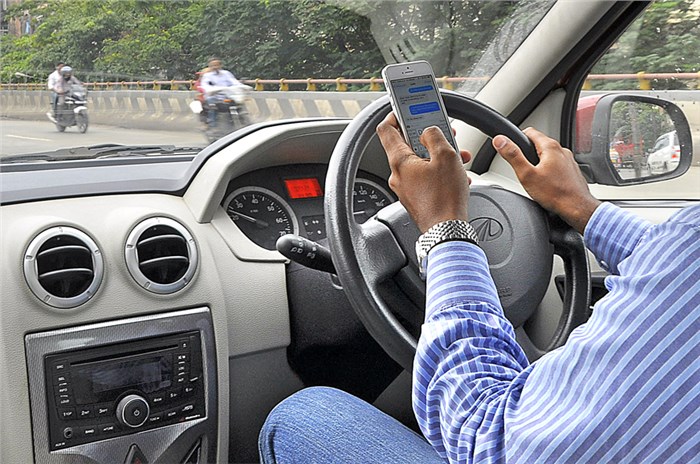 A study conducted by insurance comparison website and the leading insurance search engine, The Zebra, has revealed that iPhone users are more likely to be distracted while driving than an Android user. The results of the study involved a survey of 2,107 Americans, which revealed that iPhone users ‘reported that they text, take photos, browse social media, and even watch videos on their devices more often than Android users.’

Findings from The Zebra‘s driver distraction survey are tabulated below:

Comparing the findings of the study by operating system – Apple’s iOS compared to the Android OS –51 percent of iPhone users said they text behind the wheel, compared to 35 percent of Android smartphone users. Taking photos while behind the wheel is the next most popular distraction – 33 percent of iPhone users versus 10 percent Android – and is followed by video chatting (iOS 17 percent to Android 8 percent). Other distractions that respondents to the survey admitted to, include checking Facebook, browsing and posting on Instagram, checking YouTube videos and streaming shows.

The Millennial generation (people born between the early 1980s and 1990s) leads in distracted driving, with 88 percent admitting they have engaged in the activity. Baby Boomers (those born between 1946 and 1964) are least likely to check their phones and become distracted, with 67 percent claiming they've looked at their phones while driving.

Distracted driving stats in the US

Crashes involving a distracted driver accounted for 17 percent of total economic loss and cost the US USD 46 billion (about Rs 3.2 lakh crore) 2010 – or $148 (approximately Rs 10,300) for every person in the US. Including lost quality of life, these crashes were responsible for $129 billion (Rs 8.9 lakh crore) or 15 percent of the overall societal harm caused by motor vehicle crashes.

The Zebra’s 2019 Distracted Driving Report reveals that getting caught using a cellphone while driving is getting exponentially more expensive, as car insurance companies are just beginning to penalise drivers for distracted driving. Insurers consider risk and the likelihood that someone will file claims when they determine whether or how much to raise insurance rates. As distracted driving is now illegal behaviour across the US, a ticket or violation for distracted driving will be listed on a person’s driving record. So even after a driver pays the traffic ticket and possible court costs for a distracted driving citation, they still face the insurance penalty for the dangerous behavior – and that penalty is up nearly 14,000 percent since 2011 (from $2 to $290). This cost adds hundreds, or even thousands, of dollars annually to a driver's auto insurance bill.

What is distracted driving?

Distracted driving is defined as any activity that diverts a person’s attention from their primary task of driving. These types of activities include usage of a mobile phone, eating and drinking, conversation with co-passengers, self-grooming, reading or watching videos, adjusting the radio or music player and even using a GPS system for navigation. Among these, mobile phone usage is said to be the most distracting factor.

Distracted driving has been identified as an important risk factor in road traffic injuries. Mobile phone usage has developed into a primary source of driver distraction as it can induce drivers to take their attention off the road, making vehicle occupants more vulnerable to crashes.

It has been established that distraction caused by mobile phone usage while driving can lower driving performance, increasing reaction times and increasing frequency of lane change. Distractions while driving have now joined alcohol and speeding as leading factors in fatal and serious injury crashes. Distracted drivers are about four times as likely to be involved in crashes as those who are focused on driving.

In India, the rampantly increasing use of phones while driving has had an impact on road and vehicular safety. As per government statistics, road accidents claimed 405 lives and injured 1,290 people each day in 2017. From the 4,64,910 total accidents that occoured during the year, there were 1,47,913 fatalities and 4,70,975 injured, and cellphone usage was involved in 8,526 accidents, which included 3,172 fatalities and 7,830 injured.