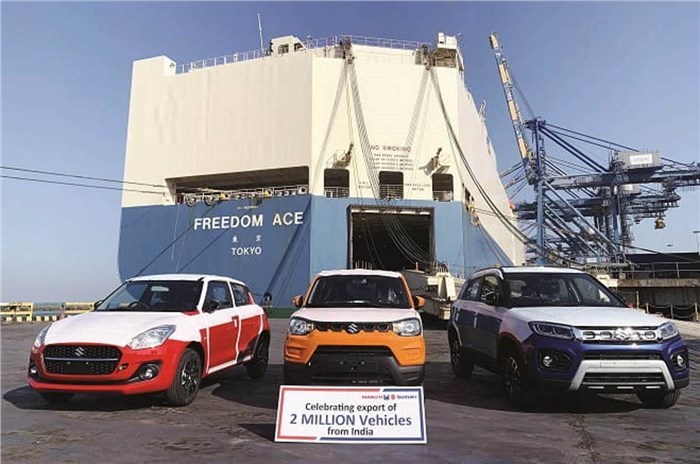 It’s been a difficult year for India Auto Inc, faced as it is with multiple challenges – be it the ongoing chip shortage, rising commodity prices, or the high fuel prices and resultant lacklustre consumer demand. Captains of industry were hopeful that November with Diwali would bring in the sales but their hopes were belied. Apex industry body SIAM released wholesales numbers for November and April-November and there’s ample red ink splattered across all vehicle segments - cumulative sales of the passenger vehicle, two-wheeler and three wheeler segments were down 32 percent in November.

The export story is vastly different and as the April-November 2021 export statistics reveal, the PV, two- and three-wheeler segments are firing on all cylinders.

Looking at the data compiled by our sister publication Autocar Professional it’s amply clear that there’s reason for cheer for made-in-India products when it comes to shipping them overseas. Total export sales of 36,91,583 units are a strong 62 percent YoY growth. Importantly, each segment has delivered in spades with passenger vehicle (PVs) up 58 percent, two-wheelers notching a 64 percent growth and three-wheelers up 47 percent.

Eight months into the fiscal year, Maruti Suzuki India has firmed up its grip on the export market, and with 1,45,906 units despatched, it has posted 192 percent growth accounting for 40 percent of total PV exports. In the process, and with four months of the fiscal year still left, the carmaker has already recorded its best annual exports.

What’s remarkable about this performance is that despite witnessing tough times in the domestic market, mainly due to shortage of electronic components and chips, the carmaker has focused on delivering overseas shipments, catering to demand. 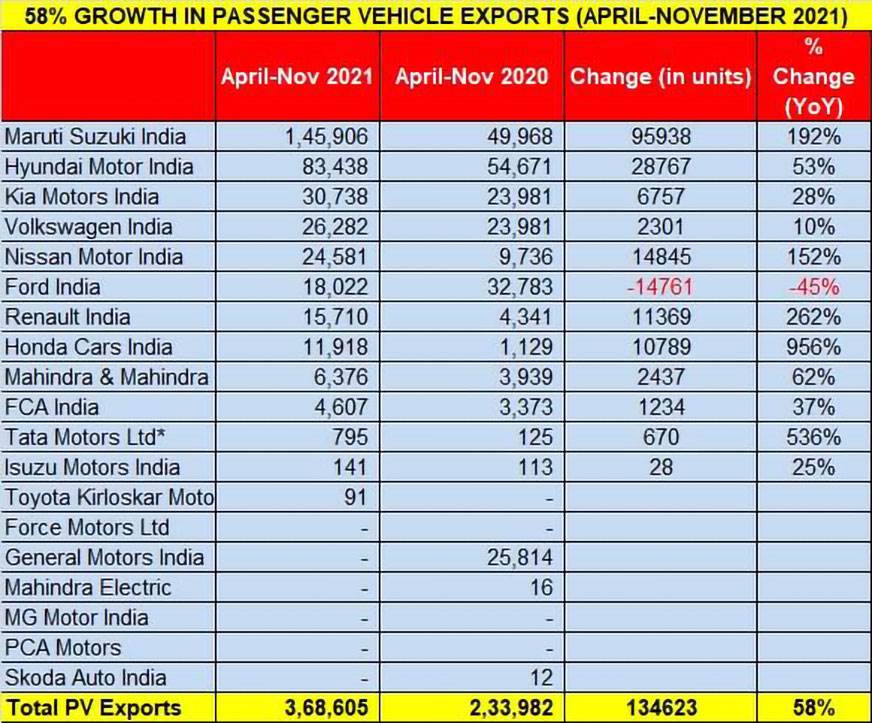 Last financial year's export market leader, Hyundai, is considerably behind Maruti. While it has 83,438 export units to its credit (up 53 percent), it looks difficult for Hyundai to catch up with Maruti Suzuki, which has set a strong pace. The gap between the two OEMs is 62,468 units.

Kia India, with 30,738 units and 28 percent YoY growth, is ranked third, with Volkswagen taking fourth place having shipped 26,282 units – a 10 percent gain over the last fiscal. Nissan Motor India is a strong fifth with 24,581 units and 152 percent YoY growth. Ford, once the leading exporter in the passenger vehicle space, sat in sixth place with 18,022 units exported – down 45 percent over the last fiscal.

Bajaj accounts for half of two-wheeler exports

The two-wheeler industry, which is witnessing slackened demand in the domestic market, particularly for entry-level products, is firing on all cylinders in the export market. Its performance between April-November is indicative of that – 29,75,952 units, up 64 percent YoY (April-November 2020: 18,09,58).

Bajaj Auto, which has always been strong on export, maintains its firm grip with shipments of 14,84,605 units (up 45 percent), thereby accounting for 50 percent of total two-wheeler exports. 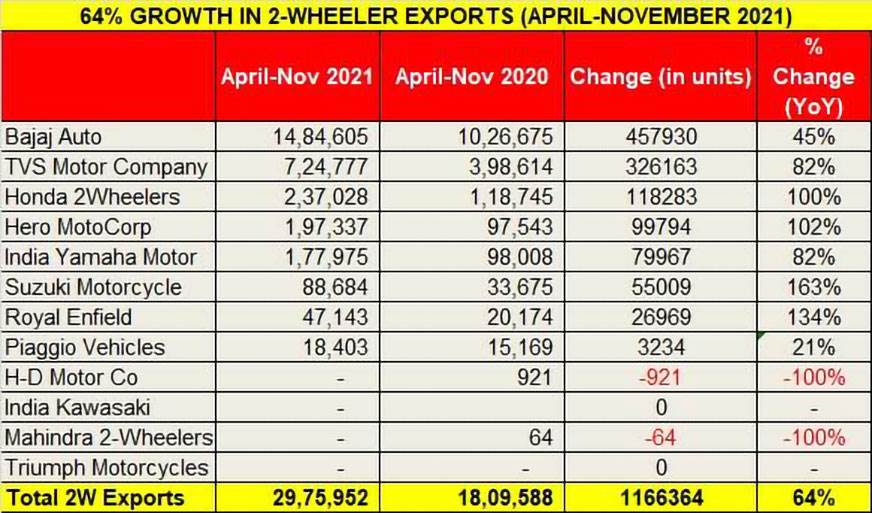 TVS Motor Co, ranked second, registered a robust performance with 7,24,777 units (up 82 percent) and accounts for 24.35 percent of total exports.

The big positive for the Indian two-wheeler industry is that export demand is driven across all the key players. While Honda Motorcycle & Scooter India (HMSI), which exported 2,37,028 units, has doubled its export performance, Hero MotoCorp despatched 1,97,337 units, posting a 102 percent YoY growth.

Maruti, Hyundai sales slide; Tata remains on the up in November