The CEO of Formula E tells us how race strategies will differ with Gen2 cars competing the whole race on a single charge and a possibility of having the race in India. 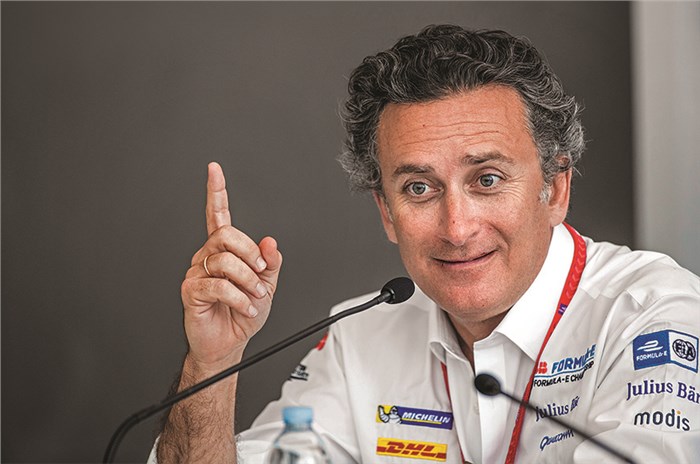 As Formula E enters Season 5, with the capital of Saudi Arabia, Ad Diriyah, set to host the opening round on December 15, 2018, we speak to Alejandro Agag, the man behind the first electric street racing series about the journey so far, India plans and importance of keeping the racing competitive. Edited excerpts.

Looking back at the last four seasons, are you satisfied with the response and progress of Formula E? What is the strategy for the future seasons in terms of expanding the fan base and getting more teams to participate?

I was hoping Formula E would be as big as it is today, but I definitely didn’t imagine it could happen so fast, with so many manufacturers, sponsors and all these cities on board. Each one of the 45 races we’ve had so far has taught us lessons – from working with cities to promote their objectives and messages on clean mobility, to putting on exciting racing in some of the leading locations around the world. For the future, who knows; we already have three new names on the grid for season five, with Mercedes-Benz and Porsche waiting in the wings. What has brought all these names to Formula E is the close wheel-to-wheel action – so it’s key we keep racing fiercely competitive for our fans.

Mid-race car swaps were key to spicing up races so far. With them out of the equation, do you think power modes are sufficient as a strategic element?

We will have to see on December 15 in Ad Diriyah! The drama that happens when one driver is trying to overtake, while the other is focusing on energy management will be emphasised with this new format and will showcase their abilities. In addition, the top-three drivers that receive FanBoost will be able to receive an extra 100kJ of energy, so it’s not just a simple sprint to the flag.

Formula E cars don’t have the speed and sound compared to Formula 1. Is that a challenge in attracting the top talent?

It’s not a challenge but an opportunity that opens doors that’s otherwise closed for other series. For instance, only we can race in the heart of Paris because our cars don’t produce such high decibels, and that is a draw for many. I would also argue that speed doesn’t equate to anything if there isn’t competition and fighting on track. Racing can become predictable with processions of cars, but in Formula E you never know who will win the race until the last lap. That’s what drivers crave the most and Formula E has it in abundance!

Some years ago, you said having a race in India could be a possibility. Has there been any progress on that front?

India is still a very important market with huge potential for growth as the government is launching new initiatives and policies to promote electric vehicles. We also have a team based in India on the grid - Mahindra Racing - who have been with us since the very beginning. Their team principal, Dilbagh Gill, has done a great job in promoting Formula E in India and we may well see a race there in the near future.

What is your strategy on including more locations in the future?

For us, it’s important that Formula E only races in cities that want to join the electric revolution - we won’t race in a location for any other reason. As more of the world’s cities become aware of the importance of battling inner-city air pollution, expect to see our calendar grow as well. AI

The big change for season five is that the Gen2 car can complete a whole race on a single charge. How will race strategies differ?

To be able to progress from having a mid-race car swap to having a battery that can complete a full race distance in the space of only four hours, and at higher speeds, is a great testament to the advances of electric vehicle technology. It will mean strategy is more important than ever and will test teams and drivers, which will, of course, result in even more unpredictable racing.

From the next season, it will be mandatory for drivers to use two different power modes over a race distance. So they’ll need to decide when to use a higher mode which gives access to 225kW, as opposed to the 200kW available throughout the race.