Hyundai Creta petrol now gets an automatic gearbox. Can Honda's very capable BR-V take it on? 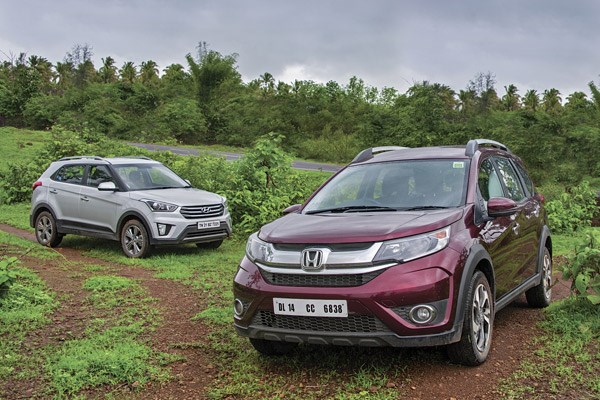 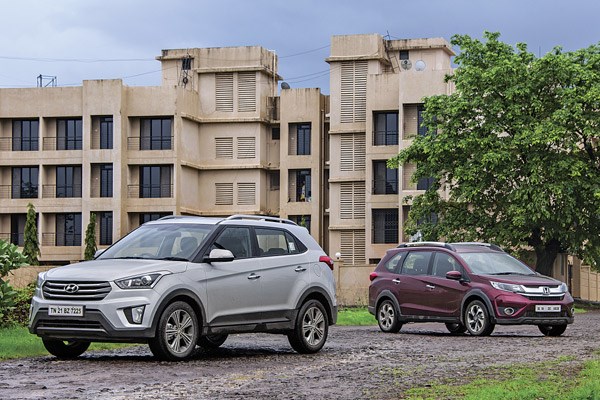 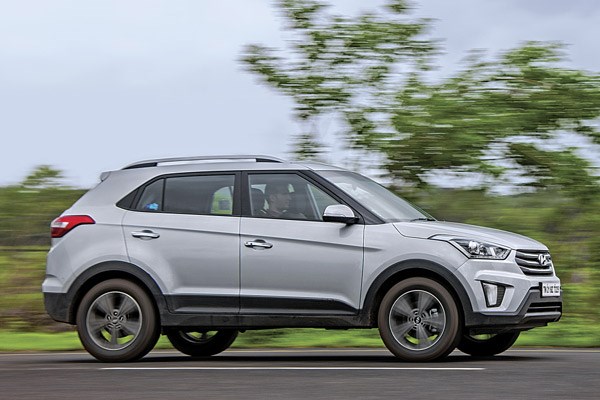 At slow speeds, ride is absorbent, but it moves around at speed. 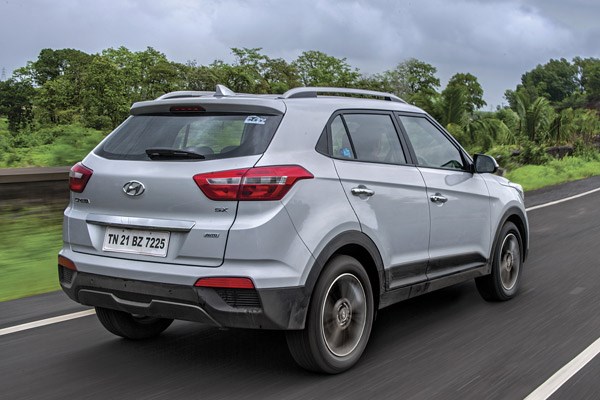 Drive in to a fuel station in an SUV and the attendant will instinctively reach for the diesel nozzle. Things, however, are about to change. Diesel is slowly but steadily losing acceptance due to concerns, often unfounded, regarding its environmental effects. Those willing to pay 25-30 percent more on running costs (fuel) can now look at a new breed of petrol SUVs.

While the Creta came with a petrol since launch, it found few takers. Now, with diesel losing its edge and the price gap between petrol and diesel narrowing, Hyundai is taking another stab at the petrol market, but this time, with the addition of an auto 'box. Honda is in the fray too with the recently launched BR-V petrol with a CVT auto 'box. But which is the better car?

Most buyers will drive these petrol automatic SUVs in town and only occasionally venture out onto the highway. And it’s the Creta that’s a bit better of the two here. The old-school torque converter-equipped automatic gearbox helps delivers a strong surge from low engine speeds and the responsive and punchy 1.6 engine continues to deliver constant power even further up the rev band. The auto 'box shifts up smoothly and silently and at every-day speeds, you hardly feel it work up a sweat. The strong bottom-end and mid-range make the Creta marginally faster off the mark than the Honda. Step-up the pace, however, and the relatively weak top-end of the Hyundai motor means it struggles. It feels strained in the top-end, there's no increase in power, and you soon realise that it is better off delivering power in lower revs. The gearbox even has a nice tiptronic function that is useful for overtaking, but you really are better off just putting your foot down. 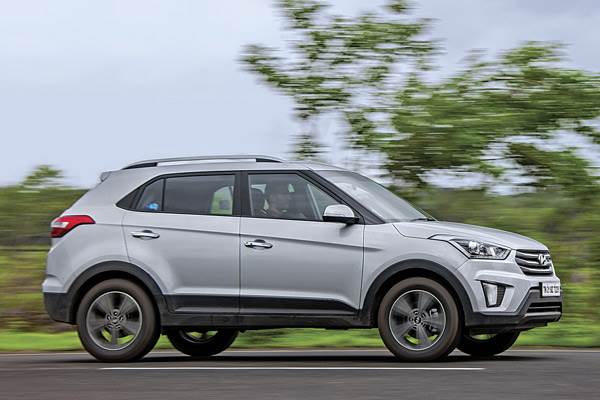 At slow speeds, ride is absorbent, but it moves around at speed.

The Honda has a smaller 1.5-litre motor that makes less power on paper; 119hp –  but the engine is the same as that of the City, which means it just loves to rev. In addition, all of the Honda's power is concentrated in the top end, at high engine speeds. This is predominantly why 0-100kph is almost a second faster. There's a nice snarl when the engine crosses 4,000rpm, the engine's becomes more eager to rev, and power delivery becomes stronger and stronger the faster you spin it. The Honda’s engine even picks up nicely from slow speeds. Its CVT gearbox also gets a small torque convertor, so the initial response to the accelerator is excellent. Ask for more power though and the comparatively weak mid-range and rubber-band effect of the CVT automatic cause the BR-V to flounder.

This situation can be resolved with manual intervention. Like in the City and Jazz, the BR-V also gets steering-mounted paddle shifters. These paddles are convenient to use and a quick dab of the left paddle is often useful in increasing the pace of the car. Once you do this, you enter a stepped gear-like mode in the CVT gearbox, which is much nicer to use.

The Honda is also easy to drive in traffic. The BR-V's direct steering makes this 4.5-metre car quite easy to steer, there's a nice lightness to how the controls operate and while the BR-V needs some goading to turn into tight corners (due to the long wheelbase), driving for long distances can be quite relaxing. Straight line stability is very good, it takes long and fast corners in its stride and the brakes work well; which delivers plenty of confidence. Wish the ride was a bit more absorbent and silent though. 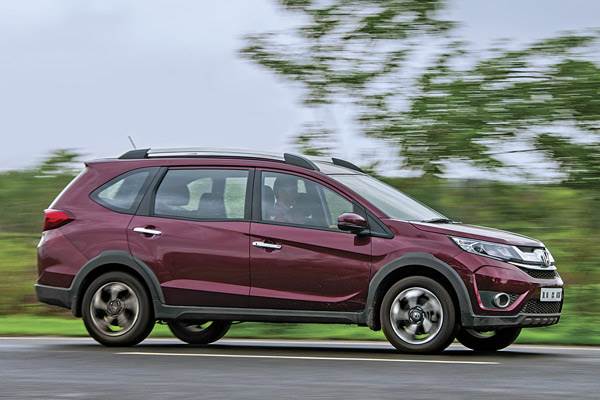 BR-V's ride is stiff, but it handles nicely; suspension is a bit noisy.

The Creta doesn't feel as stable as the Honda at speed. There is a bit more body roll when you drive through corners, it doesn't deliver as much confidence in faster sections and there is a bit more up and down movement at speed too. Still, the Hyundai rides comfortably in the city. Yes, at slow speeds, the Creta handles bad roads with a hint of firmness as well, but most bumps are ridden over without much in the way of a deflection filtering into the cabin. The steering, however, feels more connected and delivers a bit more feel. And without the extra length, the Hyundai feels much more agile in the city.

Climb into the Creta and you instantly get the SUV feel. The seats are placed higher than in the BR-V and they offer a good view of the road ahead. The front seats provide decent support and are big enough to keep even large body frames comfy. They provide good under-thigh support and the backrest is nice.

The dashboard is well crafted and put together too. Everything feels well built in the Creta. Moreover, the cabin insulation is great, so you barely hear the idling engine or outside noise. Rear-seat passengers will also find themselves comfy, with the nicely laid-out, high-set seats offering good legroom and plenty of under-thigh and back support. But the AC blowers placed behind the elbow box aren’t as effective as the roof-mounted ones on the BR-V, it doesn't get the option of seven seats and you can't get the petrol auto with leather seats; a bit of a downer on an SUV that costs Rs 13 lakh. 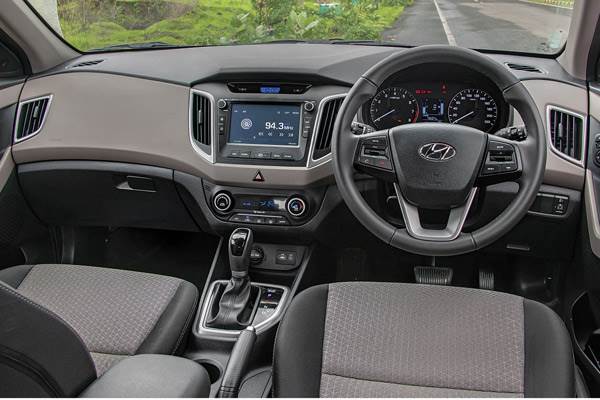 Creta dashboard is simply laid out, feels plush and buttons and knobs have a nice, tactile feel.

In contrast, the BR-V is lower slung, so you don't have the same SUV-like driving position. The slim seats offer good support and are well bolstered but aren't as comfy as the Creta's. Still, finding an ideal driving position is quite easy. Second-row passengers are sat much lower than in the Creta, and the seating position is slightly knees up, but the seat is comfy and with the good range of adjustment available, you can really stretch out if there is no one sitting behind you. The roof-mounted air-con vents are placed well and do a decent job of cooling down cabin on a hot day. What is the biggest strength of the Honda is the third row that allows two more passengers to sit. And as third rows at this price go, it's a pretty good one. Accessing it is easy, with the one-touch tumble for the second row and the seats themselves being reasonably comfortable with a decent amount of space. However, these seats are best for short drives. Unlike the Creta, the interior doesn’t feel premium. There are lots of hard plastics and the centre console isn't as well specified: there's no touchscreen infotainment system, and no parking sensors.

Both cars get alloy wheels but the Creta gets smart looking 17-inch wheels as opposed to the BR-V's 16-inchers. Keyless entry and go, Bluetooth telephony, USB and aux-in for media, climate control and rear AC vents are standard too. But, where the Creta inches ahead is by offering a touchscreen infotainment system, reverse camera, static cornering lamps and a 12V power outlet for rear-seat occupants too. Both cars gets two airbags and ABS, EBD as standard.

The petrol and automatic Creta is available in a single trim which costs Rs 12.68 lakh. Hyundai provides the Creta with a standard 3yrs/unlimited km warranty. Honda’s BR-V, with a petrol motor and the automatic gearbox, is also available in a single trim costing Rs 11.99 lakh only. The BR-V gets 2yrs/40,000km warranty. Concerning after-sales service, the two brands are about the same when it comes to cost of parts and labour but Hyundai certainly has an edge in terms of reach and number of outlets. 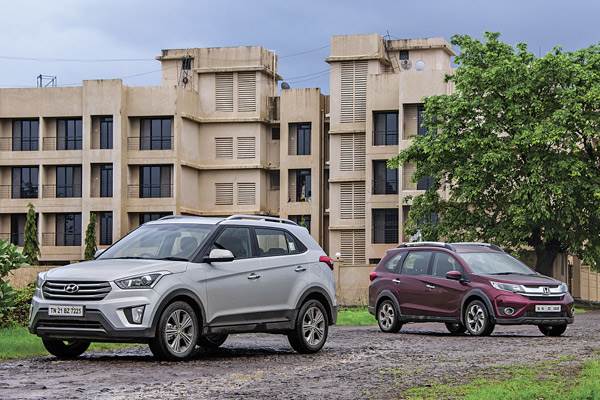 The BR-V auto is the more practical of the two. It can carry seven, it is the more efficient and even performance and stability is better. Then, Honda’s engine is free revving and the CVT gearbox is well suited to the urban driving.The Creta does not get space for seven but, unlike the Honda it feels more SUV than MPV. You sit higher, the interiors are better equipped, quality is superior and it even drives better. Even the seats are more comfortable. Yes, if you need to carry more than five, the Honda is for you; the Creta petrol however remains the better SUV, and that's despite the difference in price.