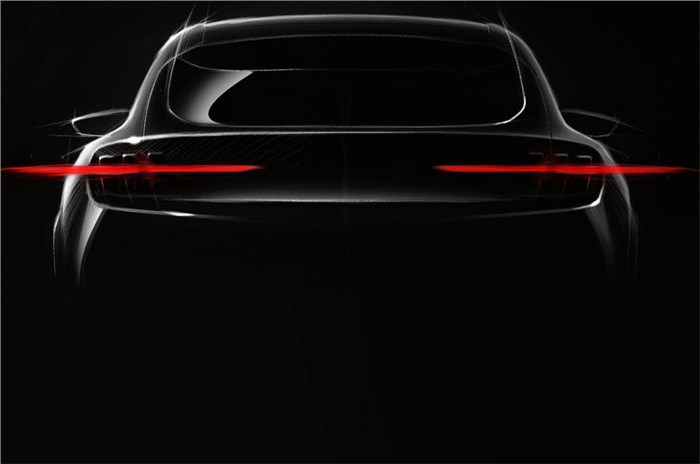 Purpose-built electric 'performance utility vehicle' due for launch in 2020. Ford is also working on CX430, an electric crossover.

Ford has released a teaser image of its first all-new battery-electric vehicle, a 'performance utility vehicle' that's it says is "inspired" by the Mustang.

The all-electric crossover, dubbed Mach 1 in reference to its Mustang-derived styling features, has been confirmed as a globally engineered model to be revealed next year, with UK deliveries starting in 2020. Few other details of the car have been released at this stage.

Ford is also working on an electric crossover, codenamed CX430, which will be built on the C2 platform used for the new Focus. That machine has been in Ford’s product plan for several years. The CX430 will be in addition to the Kuga and, since it is based on the front-wheel-drive C2 platform, it is expected to be conventional hatchback-like, with a slightly raised driving position.

Ford has identified ‘white paper’ models like the CX430 to replace sedans and hatches in its US line-up. Further, crossovers with Mustang design cues and front-drive chassis are a strong possibility because they combine “the best attributes of cars and utilities, such as high ride height, space, and versatility”.

If the vehicles are sized appropriately, European sales are likely.

Ford's push into EVs followed news in April that the carmaker was dropping the Fiesta, Focus, Fusion, and Taurus from its North American line-up.

The company's new CEO, Jim Hackett, has acted decisively and made the announcement at a financial conference in the US, momentously ending Ford’s 110-year presence in the US passenger saloon market. “We are committed to taking the appropriate actions to drive profitable growth and maximise the returns of our business over the long term,” said Hackett.

Ford US rivals Chrysler and Dodge have taken similar action under Fiat ownership, killing the mid-sized 200 and Dart sedans and instead investing in Jeep SUVs and Ram pick-ups. Between them, Chrysler and Dodge sell just two sedans – full-sized rear-wheel-drive platform twins, the 300 and Charger.

Ford will retain only the Mustang and Focus Active passenger cars on sale after 2020, although its bread-and-butter SUVs and trucks such as the Explorer and F-Series pick-up continue.

The end of the Fusion and Taurus can also be seen in the context of a drive to simplify and reduce Ford’s global platforms to just five. Currently, it has 11.

“The Ford Mondeo remains a core part of our product line-up in Europe. We have upgrades coming for Mondeo later this year and it continues to deliver on its promise of great driving dynamics, leading technologies, and competitive pricing,” Ford said in a statement.

Details of the upgrade are understood to include a new 2.0-litre diesel engine, codenamed Panther, which will be EU6d-compliant for the new WLTP driving cycle, with its real-world emissions and fuel economy testing, plus a new interior and tweaks to the exterior styling.

The interior changes are tipped to include a new dashboard moulding incorporating the Fiesta/Focus-style infotainment system with a high-set tablet-style touchscreen.

Bronco set for comeback in 2020

While Ford is betting on its upcoming electric car, it’s also bringing back a famous name, the Bronco, to reinvigorate its SUV line-up. The original Bronco arrived in 1966 and become an iconic model for Ford but was withdrawn in 1996. The last we saw of the Bronco was a concept shown in 2004.

But last year, Ford said the name would return on a global SUV in 2020. It will take on the Jeep Compass and be more rugged than Ford’s current mainstream SUVs as the firm bids to reclaim the off-road market.