Lifts ban on government departments for buying new vehicles and raises rate of depreciation on all vehicles bought till March 2020 by 15 percent. 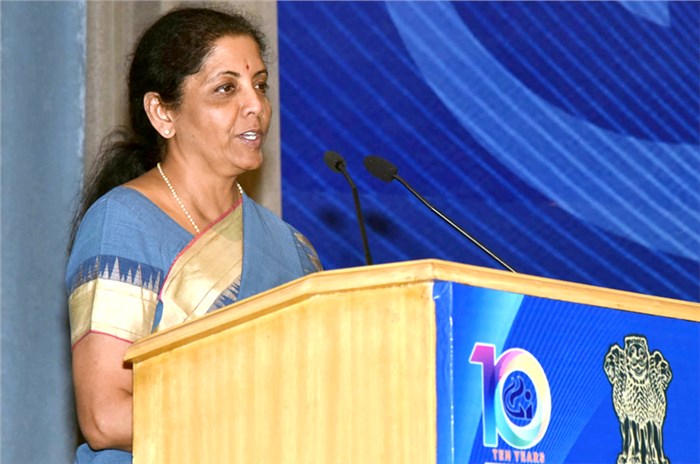 Finance Minister Nirmala Sitharaman today announced a few measures aimed at reviving the auto industry, which is currently witnessing its worst slowdown in nearly two decades. The announcement was made as part of a media briefing on steps to boost the country's economic growth.

Next, the proposal to levy a one-time registration fee on vehicles and required to be paid upfront has been deferred till June 2020, Sitharaman said.

The finance minister also issued a clarification on a few aspects that she said were a cause for concern for car buyers.

She said BS4 compliant vehicles purchased till 31st March 2020 will remain operational for the entire period of registration. "So the fear that 'what happens to my BS4 vehicle?' (post BS6) need not be in anybody’s mind. As long as their registration is on, they will be allowed and they will be as good as any other vehicle," she said.

While government will focus on setting up infrastructure for development of electric vehicle ancillaries and components, including batteries, for export, both EVs and internal combustion vehicles will continue to be registered, she said.

The government would have gone ahead with the scrappage policy, something that the auto industry has been aggressively demanding, but the same is on hold as it needs to first create the necessary infrastructure for it, Sitharaman said.

While today's announcement is a step in the right direction, the finance minister did not announce any significant steps that could have a major immediate impact towards reviving car sales. For instance, apex automotive body SIAM as well as many automakers had urged the government to reduce the GST rate on vehicles to 18 percent from 28 percent saying the move is imperative to stoke consumer demand, but no such announcement was made today.

India Auto Inc welcomes move. Here's what some officials had to say;

Rajan Wadhera, President, SIAM: The removal of ban on purchase of vehicles by government departments and 15 percent higher depreciation should give a definite boost to vehicle demand in the short term, especially vehicles meant for commercial use. The deferment in revision of one-time registration fee until June 2020 is also a very positive step as the industry was reeling under the pressure of price increases and higher registration fee would have further impacted demand negatively. Industry is grateful for the FM’s clarification that both EVs and ICE vehicles will continue to be registered in future also. Further, the clear message by Finance Minister that BS IV vehicles that are purchased till 31 March 2020 will all remain operational for their entire period of registration has cleared the air on this subject and consumers will no longer hesitate to purchase BS IV vehicles, said Mr Wadhera.

Anand Mahindra, chairman, Mahindra Group: “I applaud the methodical approach of ‘bucketing’ key drivers of the economy & administering a healthy dose of 1st-aid to each. I’m naturally enthused that the Auto industry was recognised as a major growth generator & given a bucket of its own!"

Pawan Goenka, MD, Mahindra & Mahindra: Announcements today by the FM Nirmala Sitharaman are a big sentiment booster. For auto the financing woes are fully addressed, I believe. Many other indirect demand boosters. With this and “more to come”, we hope to see a good festive demand."

Guenter Butschek, CEO & MD, Tata Motors: “Tata Motors welcomes the comprehensive set of actions laid out by the government and believes measures to improve liquidity, drive growth and reduce cost of ownership of the vehicles, should help the industry get back on track. We thank the government for hearing the concerns of the industry empathetically and doing their best under current conditions."

Rahil Ansari, Head Audi India: We highly appreciate the government's support for the automotive industry. Now it is up to the banks and NBFCs (Non Banking Financial Company) to deliver the trust and benefit given. We are confident that the ease of access on loans to consumers will also be improved by banks. Independent of this we have had and will continue to have strong in-house financing that customers can continuously rely on. Additionally, the clarity on BS4 vehicles and decision to support all fuels will remove the confusion that customers are facing. We have always maintained that luxury is not a sin and are thus enthused by government's focus on reviewing the Super Rich tax. This should improve customer sentiment specifically in the luxury industry.