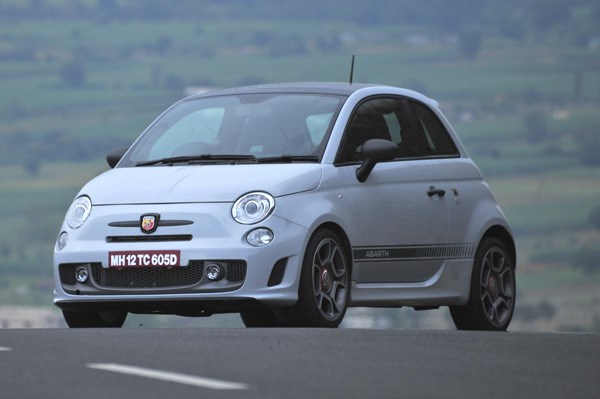 New Abarth to be imported in limited numbers. Expected price between Rs 25-30 lakh.

Fiat will unveil its hot hatchback, the Abarth 595 Competizione, at the Autocar Performance Show, which will be held from December 11-14, 2014 in Mumbai. The Fiat 500, which was powered by the ordinary 1.3 Multi-jet diesel, and went on sale in 2008, didn’t quite manage to excite buyers here. However, Fiat has now brought the iconic Abarth badge to India with a fresh and sportier version of the former. The Abarth comes with a 158bhp, 1368cc four-cylinder turbocharged petrol engine that produces 21.4kgm of torque. It comes mated to a five-speed AMT gearbox and, for now, there is no manual option. Torque can boosted to 23.45kgm by engaging the ‘Sport’ mode, which alters the turbo geometry. Putting down all that power to the tarmac are 205/40 Pirelli Zero tyres on large 17-inch wheels.

The Abarth, which is 3,657mm long, 1,627mm wide and 1,485mm tall, is pretty compact. On the outside, the door handles, wing mirrors and radiator grille get a graphite-like finish, while the interiors get sporty styling too. Sabelt race seats, foot pedals made of machine alloys, a flat bottom steering wheel, and graphite finish on the dashboard make the interiors look the part. The driver's instrument gets an LCD display instead of analogue needles. The Abarth 595 Competizione is estimated to be priced around Rs 25-30 lakh, and only limited numbers will be sold here. When the Abarth 595 is launched later, it will be rivaled by the new Minis which have just been launched, and will also be on display at the upcoming Autocar Performance Show.