Telangana-based start-up gets ARAI approval to convert combustion cars into EVs with a current range of 150km. 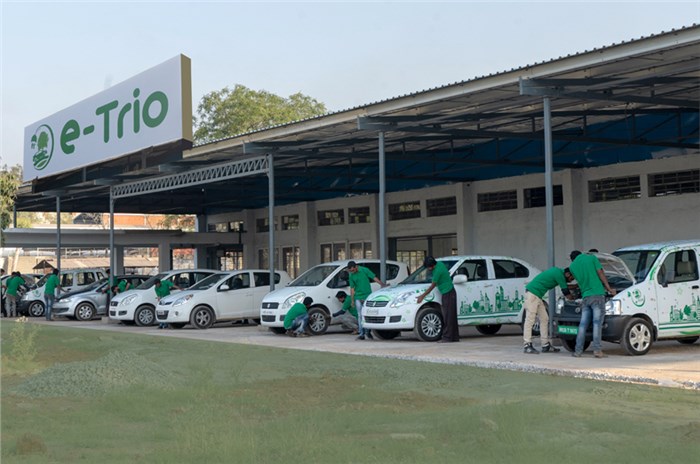 The company, which only caters to fleet buyers, says that these retrofitted electric cars can accelerate swiftly and travel up to 150km on a single charge. The start-up's factory has a capacity of converting 1,000 cars per month, and has also said it is ready to sell kits as well as retrofitted cars in the market.

The company is looking at a 7-10 year old vehicles to keep costs low, Sathya Yalamanchili, founder of E-trio Automobiles told Autocar India in an interview. The idea is to procure the shell, remove all the engine and engine-related parts and refurbish it. "We chose Maruti Suzuki vehicles as they were the easiest to procure. We narrowed down on three models, the Alto, WagonR and Dzire after testing around six prototypes," he said.

When retrofitting, it is crucial to place the battery pack in a way that it doesn't disturb the performance and balance of the vehicle. Hence, the cars undergo rigorous testing, Yalamanchili said. While the WagonR and Alto have a range of up to 150km, the company is currently working on the Dzire with an aim to achieve a 300km range, and is looking at launching it in about a year's time. "Before that, a Dzire with 250km range will be rolled out. 300km is the ultimate goal," he said, adding that “retrofitting is the need of the hour and these smart cars currently are the most efficient and economical cars compared to our counterparts in the market."

The retrofitted EV kits have been sourced from China and Korea while the kit's ‘Controller’ has been developed in-house. The company has been testing cars for a claimed two years with the immediate goal to roll out at least 5,000 cars in the next year.

Interestingly, the battery pack on E-trio's models are modular and can be swapped once they run out of juice, according to Yalamanchili. The company is currently working on reducing the time it takes to swap batteries. At present, the whole process takes around 16 minutes but Yalamanchili aims to bring it down by half. "Typically one would spend about 5 minutes at a fuel station. So we want to reduce the time it takes to swap a battery and bring it closer to that," he said,

An R&D team from San Francisco, headed by Stanford Alumni, has been providing technology guidance to E-trio. In the long run, E-trio plans to get kit approvals for other fast-moving models in India and is currently conversing with some leading car manufacturers from Japan and Thailand.

So how much will E-trio's retrofitted cars cost? The company is looking at a price of around Rs 7 lakh for either a Maruti Alto or a WagonR but says that price can be brought down, based on the order.