The Ford EcoSport is a small SUV that’s also great to drive. We tell you what to look for in a used example. 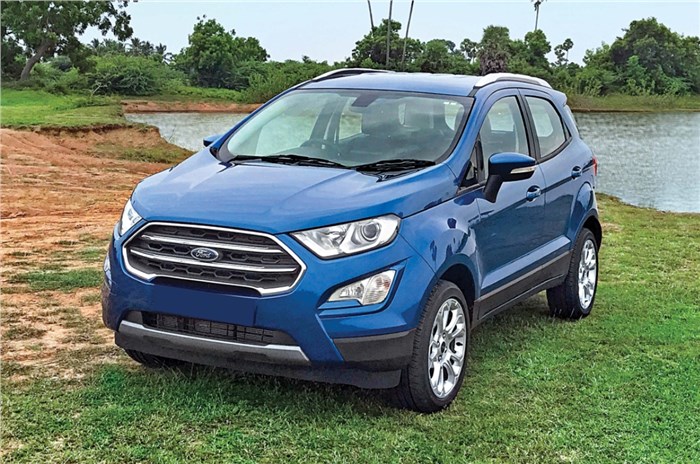 Originally launched in 2013, the Ford EcoSport essentially started one of the most popular segments amongst car buyers today – the sub-4m SUV. The EcoSport drew customers in with its compact dimensions and substantial ground clearance. And on top of that, it was a fun car to drive, in typical Ford fashion. Ford facelifted the EcoSport in late 2017, which gave it a redesigned front end and a revamped interior with a new dashboard and more features. Here are some things to know before you go ahead and buy a used example.

The EcoSport facelift can be had with three engine options – two petrols and one diesel. The petrols on offer are the 123hp, 1.5-litre, three-cylinder naturally aspirated unit and the award-winning 125hp, 1.0-litre, three-cylinder EcoBoost engine. While the EcoBoost is only available with a six-speed manual, the 1.5 petrol can be had with either a five-speed manual or a six-speed torque converter automatic gearbox. Fuel efficiency for the 1.5 petrol is rated at 17kpl for the manual and 14.8kpl for the auto whereas the EcoBoost is said to do 18.9kpl (ARAI).

The solitary diesel engine meanwhile, is a 1.5-litre, four-cylinder unit that puts out 100hp and 205Nm of torque and is coupled with a five-speed manual as standard. The EcoSport diesel is claimed to do 23kpl (ARAI). The EcoSport stands out for its ride and handling balance. The steering is precise and very well-weighted which makes it fun around corners. The EcoSport’s suspension feels pliant on most surfaces without compromising its body control. 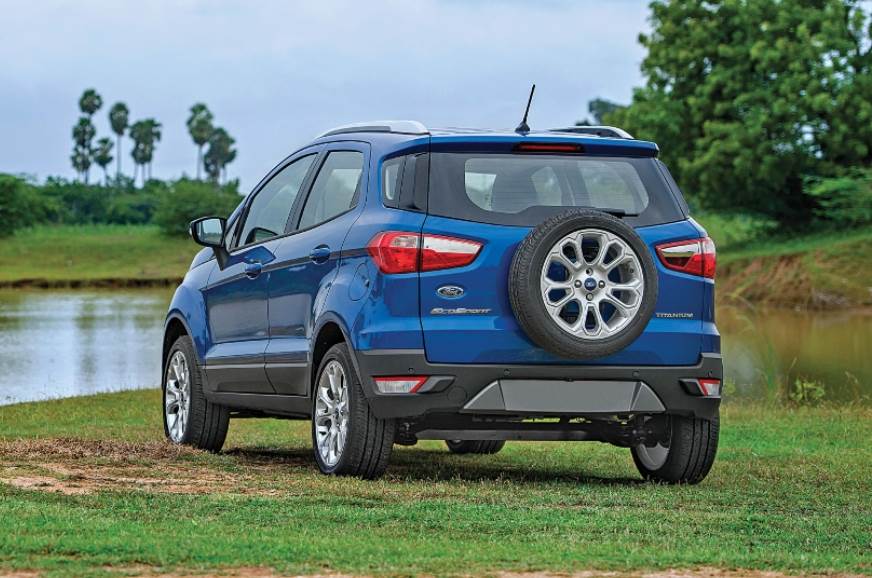 Boot-mounted spare makes the EcoSport stand out from the crowd of compact SUVs.

The top-spec S trim gets everything that the Titanium+ offers and on top of that it gets blacked-out front grille, roof and roof rails, fog lamp bezels and headlamps, 17-inch gunmetal grey alloys, HID headlamps, aluminium pedals and an electric sunroof. Do note, the S trim was only offered with the diesel and EcoBoost engines until earlier this year.

However, depending upon the model year, the used example you’re looking at may have some features missing from what’s mentioned above. That’s because Ford de-specced variants of the EcoSport facelift some time back. If you have the budget, its best to go for the S or Titanium+ trims as they offer you the most features. However, even the mid-spec Titanium trim is well-equipped enough for most buyers. 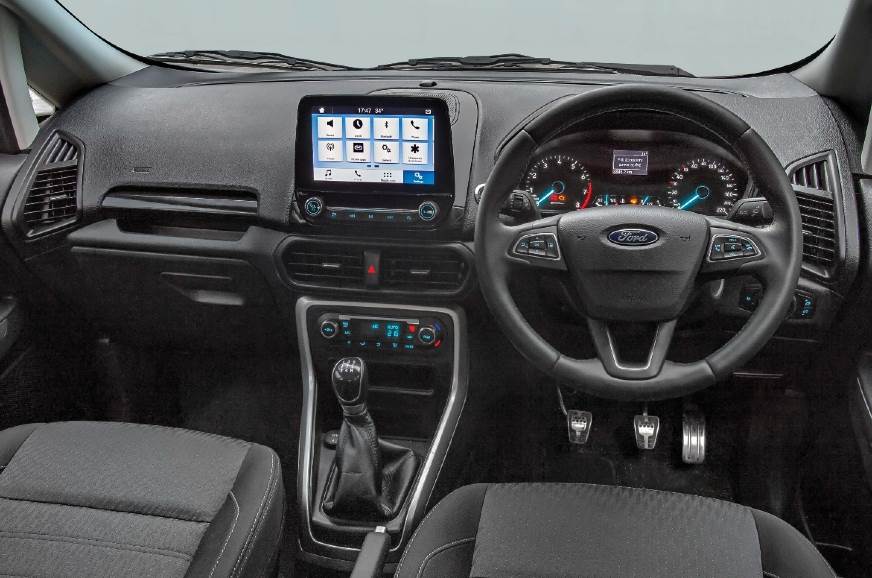 Cabin gets an all-black theme; floating touchscreen is slick to operate.

In terms of maintenance, our maintenance cost comparison revealed that the Ford EcoSport is on par with its rivals. In fact, the Hyundai Venue is the only compact SUV that’s cheaper to run compared to the Ford, over the course of 60,000km. Additionally, Ford offers the EcoSport with a three-year standard warranty, so a used 2018 model will most likely still be under warranty.

The diesel EcoSport is the one to go for as the torquey engine feels well suited to this fun-to-drive compact SUV. It is also a better option for longer journeys thanks to the higher fuel efficiency. However, if you commute almost exclusively in the city, the 1.5 petrol with the added convenience of the automatic gearbox is also a good option. 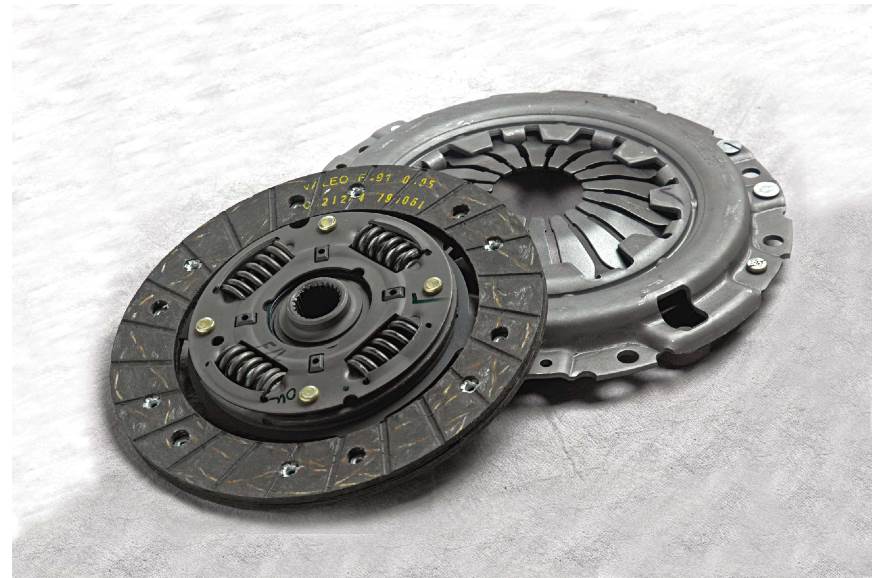 On the manual versions, check if the clutch pedal feels springy during a test drive. This is a sign of the clutch plate wearing out. 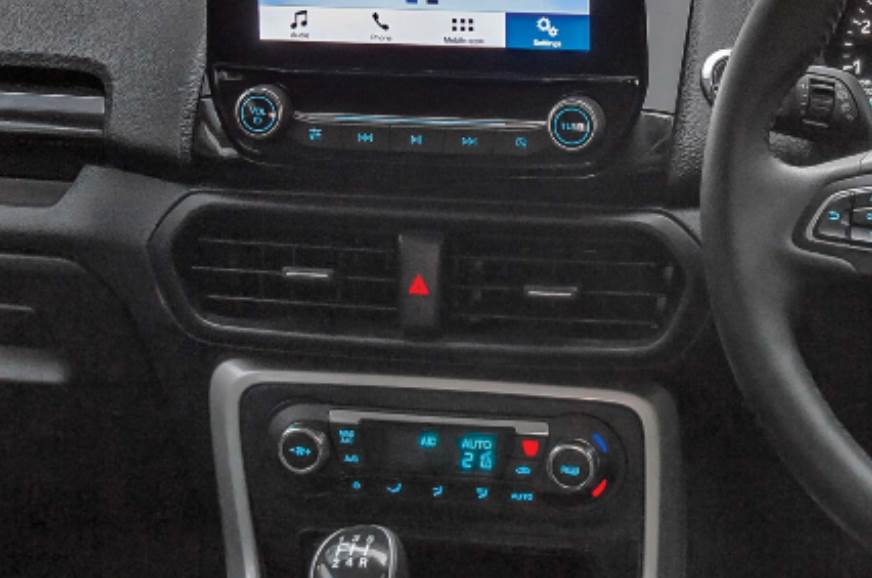 Some owners have complained about insufficient cooling from the AC system. Ensure the AC of the car you’re looking at cools the cabin quickly and effectively. 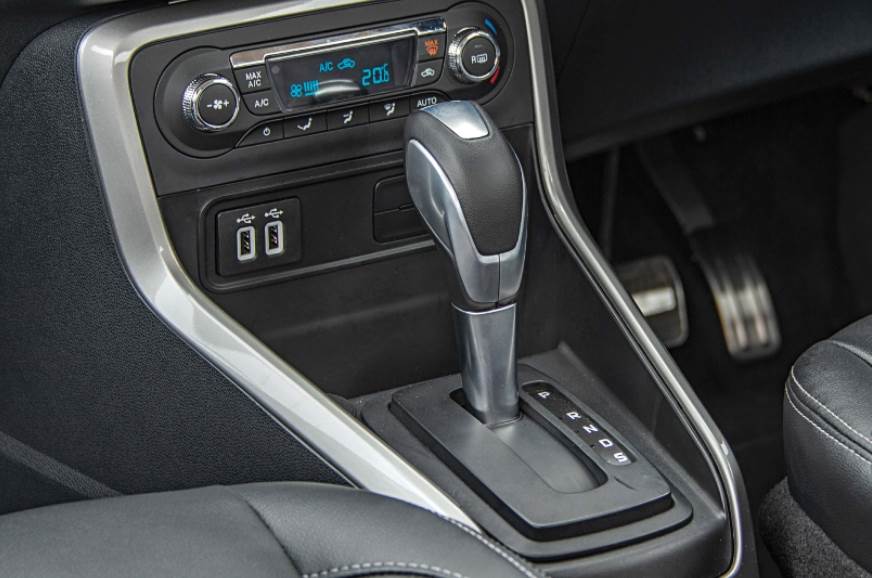 On the automatic EcoSport, ensure the gearbox functions smoothly. Check if there is any jerkiness while the gearbox upshifts and downshifts.

If you plan to go for a 1.0 EcoBoost-powered example, do note, being a turbo petrol, it’s very sensitive to driving style and owners have complained of poor fuel efficiency.

There are plenty of examples of the EcoSport facelift in the used market. Buying one for anywhere between Rs 7-9 lakh, depending on the specification, is a good deal.