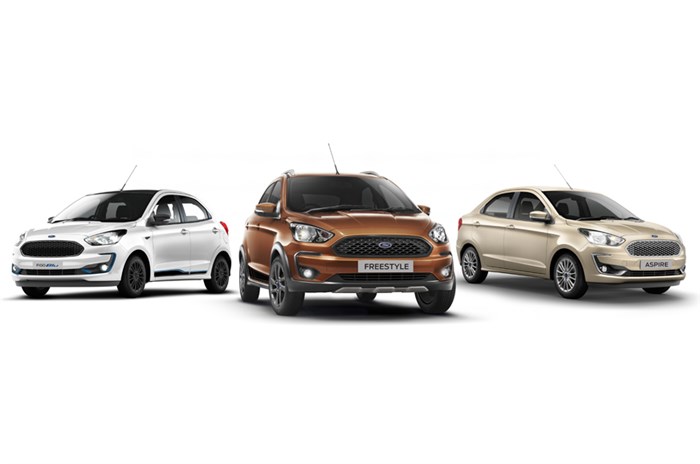 In terms of diesel engine-equipped models, the BS6 Figo diesel costs about Rs 26,000-30,000 more than the BS4 model, while the base Aspire diesel is about Rs 12,000 dearer. Interestingly, the top-spec Titanium+ variants of the Aspire compact sedan and Freestyle undercut their respective BS4 counterparts by a significant margin. All the diesel versions of these cars also have a re-jigged variant line-up.

The tables below have the details:

The same 1.2-litre petrol and 1.5-litre diesel engines have been upgraded to meet BS6 norms. However, the petrol’s overall output has reduced marginally from 96hp and 120Nm to 96hp and 119Nm of torque. The diesel engine’s output is unchanged, at 100hp and 215Nm of torque. A 5-speed manual gearbox is standard on both. Ford has yet to reveal mileage figures for the BS6-compliant engines, though expect them to drop slightly from the BS4 unit’s.

Ford attributes the decrease in prices for some variants to “increased localisation and alignment of features”, though hasn’t detailed which features have been removed. Dealer sources have confirmed that the higher-spec Figo Titanium gets new design 15-inch alloy wheels, but misses out on a rear defogger and wiper, the automatic climate control system, a reverse camera, the touchscreen infotainment system and front fog lamps. Meanwhile, the top-spec Aspire Titanium+ variant no longer comes with Ford's Sync3 system (it instead gets the FlyAudio system that enables smartphone connectivity) and new 15-inch alloy wheels.

However, the American brand has officially confirmed that all three models will get Ford’s in-car connectivity suite called FordPass across all variants. Other features that have been confirmed at least on range-topping trims include six airbags, a touchscreen infotainment system with on-board navigation, automatic headlights and wipers, keyless entry and go and an auto dimming inside rear view mirror.

Ford will also now offer all three models with a 3-year/1 lakh kilometre warranty as standard.

The Ford Figo rivals the likes of the Maruti Suzuki Swift (which will become petrol-only very soon), priced between Rs 5.19-8.84 lakh, the Hyundai Grand i10 Nios (which gets both petrol and diesel engine options) that costs Rs 5.05-8.05 lakh, and the Volkswagen Polo, which has a Rs 5.82-9.88 lakh* price tag. Do note, prices for the Nios diesel are for the BS4-compliant version and are set to increase, while the Polo will also be a petrol-only model in the BS6 era.

Ford’s Freestyle is a somewhat more niche product and doesn’t really have any direct rivals. However, on size and price, Maruti Suzuki’s Ignis (Rs 4.89-7.20 lakh) and Mahindra KUV100 NXT (Rs 4.88-7.95 lakh) could be considered as competition.