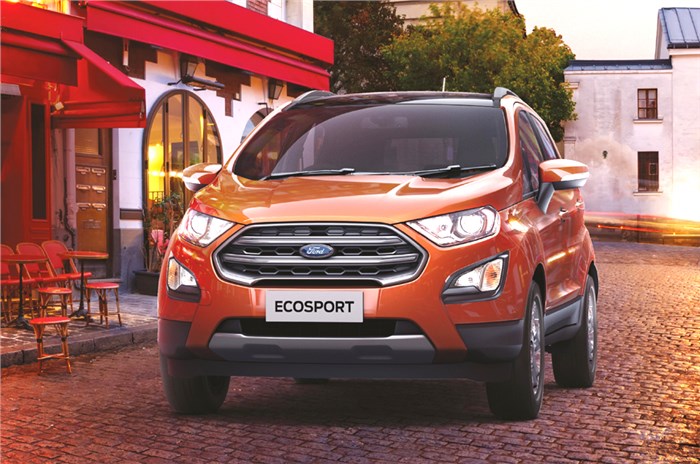 Ford India has launched its first BS6-compliant model for our market – the EcoSport SUV, with prices starting from Rs 8.04 lakh for the 1.5-litre petrol variant. The BS6-ready Ford EcoSport 1.5-litre diesel is priced from Rs 8.54 lakh.

Key features of the updated EcoSport range include six airbags on higher variants. Depending on the variant, the SUV will get either an 8.0-inch touchscreen infotainment with the Ford SYNC 3 system (replete with Apple CarPlay and Android Auto), or a 9.0-inch multimedia system. Higher trims also get features like HID headlamps with daytime running lights, rain-sensing wipers and push-button start, amongst others.

Here’s a look at the Ford EcoSport BS6 prices compared to its BS4 variants:

While prices for most variants have increased by about Rs 13,000, prices for select variants like the 1.5 diesel Titanium are unchanged.

Key rivals of the Ford EcoSport in India include the soon-to-be launched Tata Nexon facelift, the Mahindra XUV300, Hyundai Venue and the Maruti Suzuki Vitara Brezza; the latter of which will see a facelift sometime next month, along with a 1.5-litre petrol engine. Additionally, the EcoSport will see competition from some of Kia and Renault's compact SUV offerings that will see a market entry later this year.