The Virtual Visor uses a transparent LCD paired with an occupant-facing camera and AI tech to actively block the sun’s glare without hampering visibility. 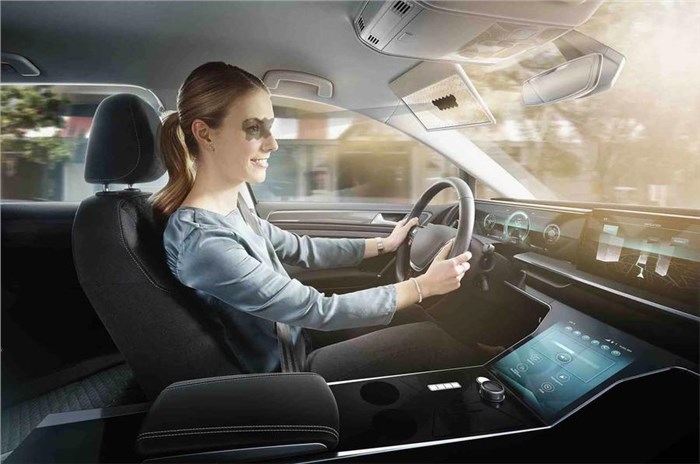 Bosch is introducing innovation in sun visors to enhance driver safety and comfort. The brand's product, the Virtual Visor, was honoured as the Best of Innovation in the CES 2020 Innovation Awards.

The Virtual Visor is about the same size and shape as a standard sun visor, but it’s a transparent LCD panel that incorporates lines of honeycomb-shaped inserts. Artificial intelligence technology analyses footage sent from a driver-facing camera to recognise facial features, and monitors precisely how sunlight hits the driver’s face. The system identifies where the driver's eyes are, and automatically tints individual hexagons to block the sunlight from falling on it. This process happens in real time; the Virtual Visor adjusts itself to changing light conditions.

Blocking the sun creates a shadow that’s not unlike sunglasses on the driver’s face. The rest of the visor stays fully transparent, thereby not hampering visibility. Bosch claims that the Virtual Visor is particularly effective at dawn and dusk.

The US National Highway Traffic Safety Administration reports thousands of sun glare-related car accidents each year. Another study indicates that the risk of a car crash is 16 percent higher during bright sunlight than normal weather. The traditional sun visor in a car is not equipped to adequately address this safety concern. Dr Steffen Berns, president of Bosch Car Multimedia spoke of this problem, saying, “For most drivers around the world, the visor component as we know it is not enough to avoid hazardous sun glare – especially at dawn and dusk when the sun can greatly decrease drivers’ vision. Some of the simplest innovations make the greatest impact, and Virtual Visor changes the way drivers see the road.”

“We discovered early in the development that users adjust their traditional sun visors to always cast a shadow on their own eyes,” added Jason Zink, technical expert for Bosch in North America, and one of the co-creators of the Virtual Visor. “This realisation was profound in helping simplify the product concept and fuel the design of the technology.”

The Virtual Visor also bagged the Best of Innovation award for the in-vehicle entertainment and safety category, as it received the highest ratings from a panel of judges that includes designers, engineers and members of the tech media.