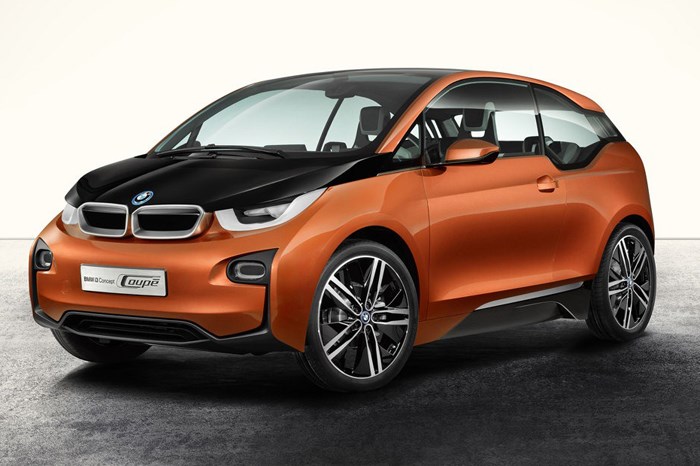 BMW is testing the market for a sportier-looking, three-door coupé version of its battery-powered i3 electric hatch with the i3 Concept Coupé, which has broken cover ahead of the Los Angeles motor show.

The BMW i3 Concept Coupé is lower and wider than the five-door i3 hatch due on sale in international markets next year and is distinguished by a more steeply sloped roofline, deeper rear side windows and a slightly more angled tailgate.

Although the three-door has yet to be signed off for production, senior BMW officials say that cost and production feasibility studies have been carried out. And it has emerged that a soft-top version of the three-door i3 is also awaiting sign-off, suggesting the i-car line-up could eventually support up to five models — three i3 hatch-derived models and two i8 sportscars.

Inside, the concept previews the i3’s production interior. Less flamboyant than the cabin revealed at Frankfurt last year, it sports a simple dashboard housing an integrated digital instrument binnacle, a minimum of switchgear and a free-standing, central sat-nav monitor.

The majority of the controls are accessed via an iDrive rotary controller mounted between the front seats. The steering wheel is a basic two-spoke affair with multi-function controls while the pedals are forged aluminium.

Power comes from a 170bhp electric motor mounted on the rear axle and driving the rear wheels through a fixed ratio gearbox. Lithium ion batteries are packed inside the floor structure. This complete powerpack is shared with the five-door.

To eke maximum energy from the battery pack, a cockpit-mounted ‘Driving Experience Control’ switch offers three driving modes: Comfort, Eco Pro and Eco Pro+, each with its own individual throttle mapping and climate control settings. BMW claims a range of up to 160km in the most efficient Eco Pro+ mode, which shuts down energy-hungry devices like seat heaters.

BMW isn’t making any official performance claims for the i3 coupe. However, figures already revealed for the i3 hatchback suggest it will hit 100kph from standstill inside 8.0sec and reach a top speed of 93mph. To maximize range in Eco Pro+ mode, top speed is limited to 90kph

BMW is also showcasing a number of new internet-based functions that will be made available to buyers of its new i brand models under the ConnectedDrive banner on the i3 coupe.

They include a navigation system claimed to provide accurate assessment of range based on real-time traffic information. A so-called eRemote smartphone application developed for both iOs and Android operating systems also allows you to keep tabs on the state of the battery charge remotely, including during periods of plug-in charging.