Best of 2018: Our most viewed car comparison videos

A list of the top five most watched car comparison videos on the Autocar India YouTube channel. 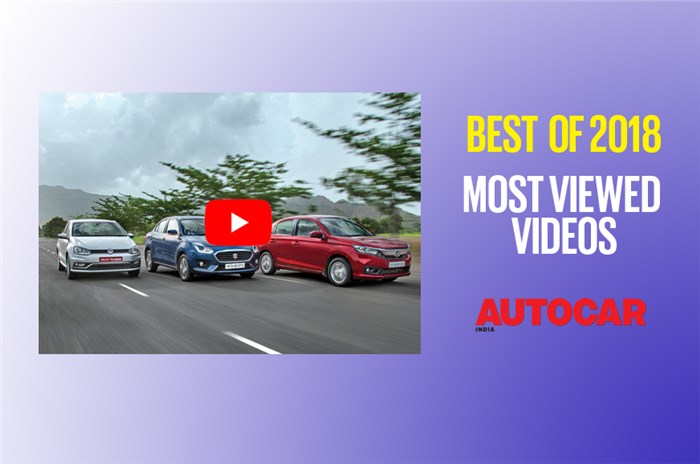 Our viewers are always asking, “Which car is the best out of the lot?” Our answer is to conduct extensive and thorough comparisons of each new car, pitting them against their closest rivals. Here are the five most viewed comparison tests on our channel:

‘Precision’, ‘quality’, ‘class’ and ‘long-lasting’ are some of the words synonymous with German cars. Audi, BMW and Mercedes-Benz are the most common names one thinks of when German-made premium cars are mentioned. Audi and Mercedes-Benz launched updated versions of the A4 and C-class, respectively to in order to contend with the BMW 3-series. While the revised BMW 3-series will only arrive in 2019, we pit the current model against the A4 and C-class yet again to see which one comes out on top this time around.

Hyundai introduced the new i20 facelift on May 25, 2018. It was offered with a reworked rear-end and some new features. Due to increasing demand for automatics in this segment, which includes the Honda Jazz and Maruti Suzuki Baleno, Hyundai brought out a CVT automatic mated to the 1.2-litre petrol motor. We pit them against each other to see which one was the best.

With the second-gen Amaze, which launched on May 16, 2018, Honda introduced a diesel-CVT automatic combination for the first time. The current segment-leader, Maruti Suzuki’s Dzire, had a diesel-AMT combo while the Volkswagen Ameo came with a diesel-dual-clutch automatic. We brought the three distinct takes on the diesel-automatic compact sedan to find out which was the winning combination.

The popular midsize sedan segment saw the entrance of a new contender in the form of the Toyota Yaris. The Honda City and Hyundai Verna have been reigning at the top of this segment for many years. Although Toyotas are famed for build quality and reliability, our extensive comparison answered questions such as: Does the new Yaris live up-to the name and emerge victorious? Or do the veterans continue their regime?

Maruti Suzuki launched the Swift with a fresh new design and more features on February 8, 2018. As the Baleno, a more premium hatchback, has the same DNA as the new Swift (namely the Heatect platform and K12 petrol engine), just how different is the new Swift? Considering the smaller hatchback can be personalised with quirky, fun graphics and paint schemes, is that all that differentiates? Is the slightly more expensive Baleno better? We answered all those questions and more in this thorough comparison test.

Best of 2018: Our most viewed car and SUV video reviews

Best of 2018: Our most viewed bike and scooter video reviews