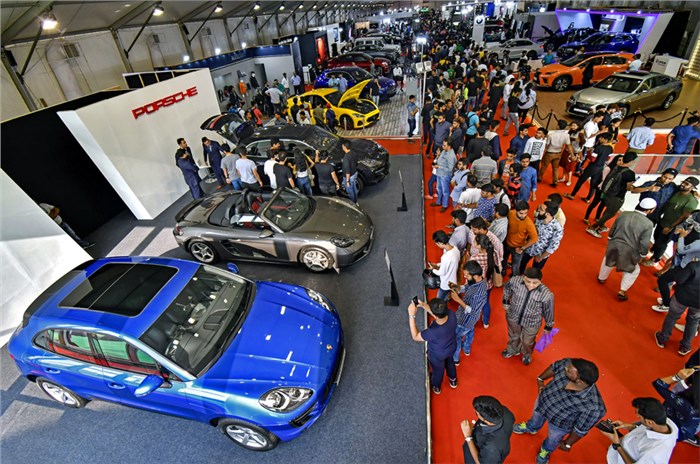 Event’s 13th edition sees a record number of brand participation, along with the Mumbai debut of Kia Motors, Jawa and MG Motor India.

Our Autocar Performance Show once again wowed scores of automobile enthusiasts with its eye-catching display of some of the most exciting cars and motorcycles on sale in the Indian market. The 13th edition of the one-of-its-kind show, held from at the MMRDA Grounds, Bandra-Kurla Complex, Mumbai, came to a close yesterday, drawing over 1,00,000 visitors between December 13-16.

Two brands that made their Mumbai debut and attracted a lot of attention were Kia Motors and MG Motor. Kia brought in the hot Stinger four-door sedan and the Sportage SUV, while MG provided a glimpse of its past with the MGB Roadster, and its present with the E MG6 plug-in hybrid sedan.

Earlier yesterday, there were two supercar and superbike rallies, organised by the Throttle97 and Kawasaki groups respectively, for a preview of the show for their group members. Motorcycle aficionados were thrilled by the performances at the Race Dynamics dynamometer, where several big bikes – from supersport bikes to street nakeds – were pushed to the limit and tested to gauge their true power outputs.

In addition to major manufacturers’ portfolios on display, there were also some cars that enthralled showgoers. They included the all-new BMW M2 Competition, Audi A5 Sportback and RS5 Coupe, Mercedes-AMG E 63 S, Maserati GranTurismo S, Volvo S90 and the Lexus ES 300h. There were also plenty of new SUVs such as the powerful duo of the Mercedes-AMG G 63 and the Lamborghini Urus, followed by models such as the Nissan Kicks, Lexus NX 300h, Maserati Levante, Porsche Cayenne and the Volvo XC40 and XC90, to name a few.

Another major attraction at this year’s show was the Supercar Gallery powered by Throttle97 (Mumbai’s largest supercar group), which housed stunners like an Aston Martin DB11 and an Audi R8 V10, among others. Also wowing the crowds was Mahindra’s Formula E Season 5 race car, the M5 Electro.

Plenty on two wheels too

There was also plenty of metal on two wheels as well. Motoroyale’s expansive display – comprising bikes from SWM, FB Mondial, MV Agusta, Norton and Hyosung – attracted a lot of attention, as did Triumph’s showcase consisting of the Street Triple RS, Tiger 800 XRx and the Bonneville Bobber that left many in awe.

Kawasaki packed a punch with the entire Ninja range – the Ninja 300, Ninja 400, Ninja 650 and the Ninja 1000, apart from the Versys 650, Vulcan S, Z 650, Z 1000 and the track-focused ZX-10R. Italian superbike major Ducati made a strong impact with its Panigale V4 superbike and the Monster 795. There was also a Superbike Gallery, with bikes such as the Kawasaki Ninja H2 and Honda CBR1000RR on display. For the first time in India, a Kawasaki Ninja H2 supersports bike was put on dynamometer by Race Dynamics.

The 2018 Autocar Performance Show also housed live performance zones, which visitors made the most of. Red Bull’s driving simulator let enthusiasts enjoy the thrills of driving in the virtual world, and off-road junkies loved the Mahindra 4x4 Experience Zone, which gave them a chance to experience what the Thar is truly capable of on a specially designed off-road obstacle course.

Speaking at the closure of the four-day show, Hormazd Sorabjee, editor, Autocar India, said: “The Autocar Performance Show 2018 has been our best show yet – both in terms of participation and the crowds. There’s a lot of interest in the new brands that made their Mumbai debut here, and one of the major crowd-pullers was the Race Dynamics dynamometer, which has come to the city for the first time. I’m glad to see the level of enthusiasm and passion for cars and bikes among the people of Mumbai.”