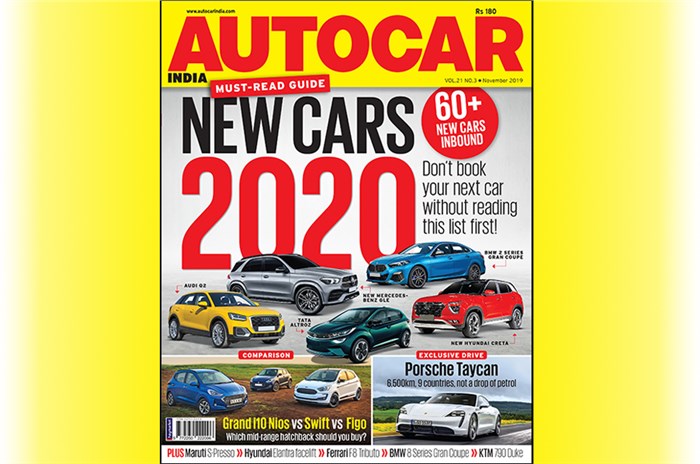 In our November 2019 issue, we bring you an exhaustive list of all the new cars and SUVs that are set to be launched in India in 2020. Plus, we’ve taken the all-electric Porsche Taycan out for an exclusive first drive, and also driven the Maruti Suzuki S-Presso, Renault Kwid facelift, Skoda Kodiaq Scout, Hyundai Elantra facelift, new Bentley Flying Spur, Datsun Go CVT, BMW 8 Series Gran Coupe and Ferrari F8 Tributo. Also in this issue is a comparison test involving the Hyundai Grand i10 Nios, Ford Figo and Maruti Suzuki Swift, to go with our reviews of the KTM 790 Duke, updated Triumph Street Triple RS + more juicy news from the industry and features you’ll enjoy reading. Here are the highlights:

We’ve listed out every new car and SUV set to be launched in India in 2020, and there are well over 60 names on this list!

Is Maruti’s new S-Presso ‘mini-SUV’ a shot in the dark or does it have a lasting effect like its namesake?

The Renault Kwid has got its first major update, and there’s plenty to talk about.

The 7-seat Skoda Kodiaq receives a dose of added ‘SUV’ with a new ‘Off-road’ mode, underbody protection and some styling tweaks.

With a rather exhaustive update, the Hyundai Elantra is set to take the fight to the Honda Civic, Skoda Octavia and Toyota Corolla Altis.

Porsche’s first full-electric sportscar, the four-door Taycan, is tasked with crossing nine countries. We join the bandwagon on the last leg to ‘charge’ to the finish.

A replacement, a tribute and perhaps the last of its kind – we head to Maranello to drive the F8 Tributo.

Though it’s not the first of its kind, the Porsche Cayenne Coupe certainly seems to justify its existence with its incredible driving dynamics.

The new BMW 8 Series Gran Coupe has to deliver stunning looks, sportscar-like performance and a dose of practicality. We find out if it does.

The Hyundai Grand i10 Nios takes small but significant steps to move the game forward in this class. We pit it against two of its fiercest rivals.

We’ve had our first taste of KTM’s first ‘big’ bike for India, and it has certainly lived up to the hype.

Armed with an update for 2020, the Triumph Street Triple RS now gets a Euro-5 engine with improved mid-range punch.

The Hero Xtreme 200S and Suzuki Gixxer SF are two of the most affordable faired bikes you can buy. We tell you which is the one to pick.