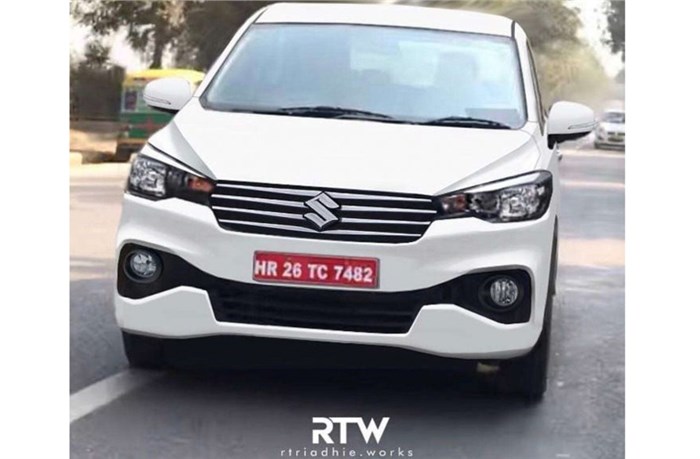 Maruti is planning to bring in the new Ertiga MPV to our market sometime in August this year. The current model has been on sale since 2012 and had received a mid-cycle update back in 2015.

The second-generation Ertiga (codename: YHA) has been spotted road-testing on the outskirts of Delhi. Though, Maruti has cleverly disguised the design of its upcoming MPV, there are a few details that reveal a lot.

A first look tells us that this new MPV is longer and slightly wider than the outgoing model. The rear overhang is much bigger to give more space for the third row of seats; the additional space is also likely to allow for more cargo room and this is why the windscreen is now raked. The car seems to have larger alloy wheels (mostly 16-inch rims) and a prominent beltline running across the side from end-to-end.  Up front, the stance is more upright with a high-set nose and front bumper.

The prime reason for Maruti to increase the MPV’s dimensions would be to make it even more practical and competitive in terms of interior room and fill the void left by the repositioning of the Innova Crysta, which has left a gap in the affordable MPV market in India.

Maruti is likely to carry over the same 1.4-litre petrol and a 1.3-litre diesel in the next-gen car. The company is currently developing an in-house 1.5-litre diesel which could come in at a later stage.

The next-gen Ertiga from Maruti will take on the likes of the upcoming Mahindra U321 MPV which is also slated to be unveiled soon.