Plus, an exclusive India drive of the Audi e-tron Sportback, the Alcazar takes on the Safari, and much more. 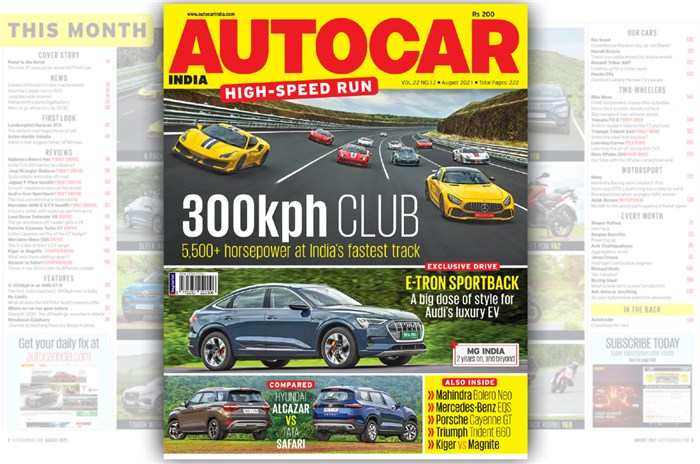 Click here to order the August 2021 issue from Amazon

This month, we take a group of supercars to try out the new high-speed test track at NATRAX near Indore. We have an exclusive first drive of Audi’s sexier e-tron Sportback electric SUV, plus a ride of the long-awaited Triumph Trident 660. We’ve also compared the Hyundai Alcazar to the Tata Safari, and the Renault Kiger to its Japanese cousin, the Nissan Magnite. We tell you how MG has managed to stay successful after two years in the market, and also how Ford, after 25 years, has its work cut out for it. Plus, the Bolero Neo, Mercedes EQS, Honda’s new Creta rival and so much more. Read on to know what’s in store.

After 16 years in development, India’s most sophisticated automotive testing facility is open. It offers a wide array of labs and test tracks, most notably a high-speed ring where even the fastest cars can be maxed out. We went there, all guns blazing, with a convoy of supercars from Throttle97 in tow, to test out NATRAX’s facilities and also record India’s first-ever instrumented 0-300kph run.

Thought the Audi e-tron was just a bit too nondescript? The e-tron Sportback coupe-SUV might be the answer for you, and we’ve driven it exclusively this month. The best part is, it doesn’t come at a huge premium.

Against difficult odds, largely unknown Chinese-owned British car brand MG entered the Indian market and continues to taste success two years on. We delve into how they’ve managed to do it, and what’s in store next.

The three-row midsize SUV segment is growing fast, and we’ve brought together two of the latest entries, the Alcazar and Safari. But though they’re in the same segment, they couldn’t be more different from one another.

When two cars are so similar, picking between them gets even harder. And these two – built in the same plant, based on the same platform, with the same engines and equipment – are cut from the same cloth.

The EQS might just be the future of luxury cars, taking the finest bits from the latest flagship S-Class limousine, and blending them with the silence of an EV powertrain. Is this the new ‘Best Car in the World’?

Not content with its two Group cousins, the Lamborghini Urus and Audi RS Q8 hogging the super-SUV limelight, Porsche has developed its most hardcore Cayenne yet, the 640hp Turbo GT Coupe, and we’ve driven it this month.

At just under Rs 7 lakh, could this 81hp, 660cc triple be the ideal first big motorcycle for just about anyone? We finally get aboard the much-vaunted Triumph Trident to find out exactly that.

After this year’s action-packed season comes to an end, what will we have in store for the 2022 F1 calendar? Well, it all starts with the car, and we take a close look at what changes have been made for next year.