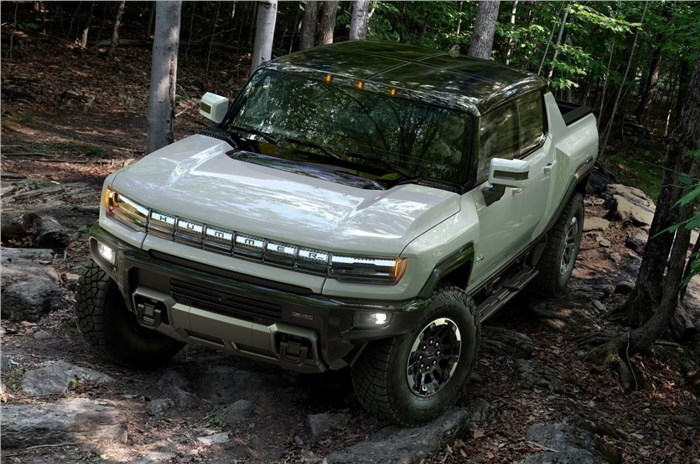 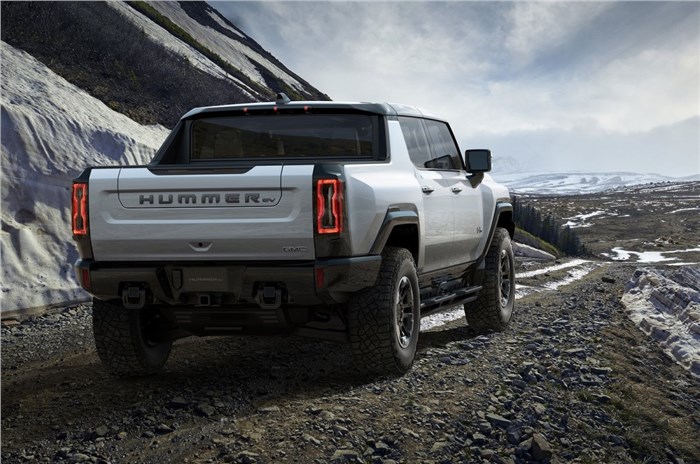 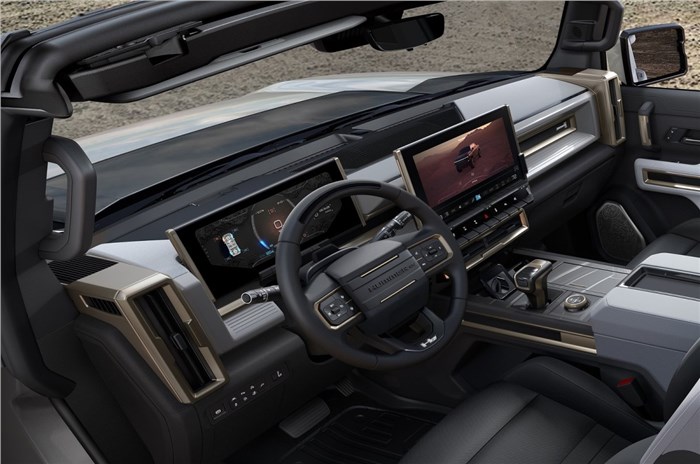 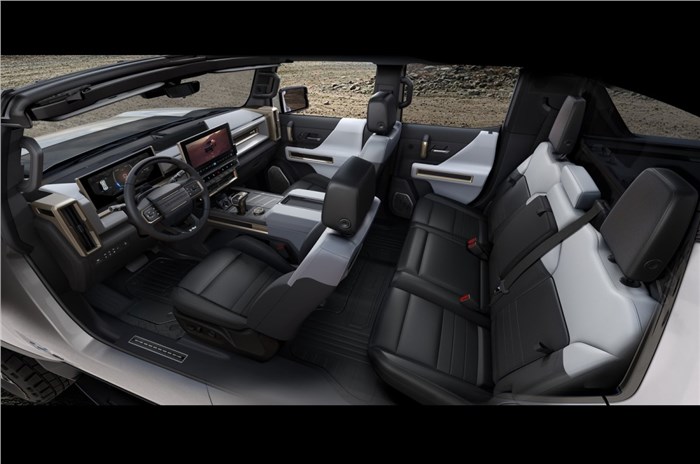 The GMC Hummer EV has been revealed in its pick-up body style ahead of entering production, late next year. Revealed in Edition 1 spec, the Hummer EV marks the revival of the SUV brand which ceased operation back in 2009.

The Hummer EV follows a boxy and upright design reminiscent of the original Hummers but with more futuristic design details. The stand out element at the front is without a doubt the illuminated grille and headlamps. A LED lightbar spans the entire width of the front fascia from headlamp to headlamp. The grille is broken into six individual slats with each housing a letter spelling out the word Hummer. The headlamps, additionally, feature unique charging graphics. Each individual LED element within the units light up in sequence as the SUV charges. The front bumper features high set fog lamps and a prominent skid plate to give it that off-roader look. Completing the look are three positioning lights atop the windshield, a throwback to the original Hummers, and a clam-shell bonnet that hides a front storage compartment.

The flanks too feature angular design elements with massive squared out flared wheel arches, upright A pillar, squared out windows and wing mirrors. Access to the pick-up loading bed is via what GM calls a MultiPro Tailgate. The MultiPro tailgate consists of a split tailgate with an in-built, smaller access hatch. This secondary panel opens outwards independent of the main unit and allows users to step closer to the load bed with the tailgate open, or use it as a work table with the main tailgate shut. A flap on the inner surface of this panel can also be deployed as a step when both sections of the tailgate are open, or as a load stopper for long items. Slim LED tail-lamps sit on either side of the tailgate.

The squared out design carries forward inside the cabin. The upright dashboard is dominated by two displays – a large 13.4-inch central touchscreen and a smaller 12.3-inch unit ahead of the driver. The displays, aside from displaying the usual range of information can also be programmed to show details such as torque output, pitch and roll angles, friction circle and other readings to aid off-roading.

The Edition 1 seen here, features bronze accents across multiple surfaces including Hummer EV plaques located on the seats. The steering also features an indicator light at the top for when the autonomous tech is activated.

The Hummer EV Edition 1 also gets what GMC calls an Infinity Roof with glass panelling – like individual sunroofs - to let natural light in. Additionally, the roof panelling can also be removed and stowed away in the front storage bay to give a proper open-air experience.

These are surely the Hummer EV’s standout figures. Powered by  three electric motors paired with an underfloor battery pack, the Hummer EV puts out a claimed 1000hp and 15,592Nm of torque. The torque figure GMC quotes though, is likely to be the torque at the wheels which includes the torque-multiplying effect of the vehicle's gear ratios. Actual electric motor output is yet to be revealed. The carmaker says the Edition 1 models can make use of all this power by a driver selectable ‘Watts to Freedom’ in which the SUV can accelerate from 0-96kph in 3 seconds.

The batteries will be arranged in a 24-module double-stacked layout, and while GM has yet to reveal their storage capacity, it claims the Hummer EV will be able to travel more than 560km on a full charge. The 800V system can be charged at speeds of up to 350kW on a DC fast charger.

GM has packed the Hummer EV with plenty of technology including standard four-wheel steering with a unique Crab Walk mode. In this mode, the front and rear wheels at low speeds turn at the same angle thus allowing the Hummer EV to essentially travel diagonally.

Other standard tech on offer includes adaptive air suspension, which can raise the car by as much as 149mm,Extract mode, to navigate over obstacles. The Edition 1 models, additionally, get selectable drive modes which can adjust parameters such as the torque splits between the front and rear wheels, and four-wheel steering settings and adaptive dampers. Also standard fit on the Hummer EV is the company’s latest Super Cruise driver aids including hands free semi-autonomous driving with lane change capability. The company says that the hands free functions are available on about 3.22 lakh km of specially enabled roads.

The Hummer EV also offers its drivers up to 18 different camera views of the exterior including two cameras located in the underbody displaying a view from between the axles, not too far away from Land Rover with its ClearSight Ground View tech.

The GMC Hummer is only set to go on into production, in 2021 with the Edition 1 models being the first to go on sale. These will be followed by three distinct variants with varying levels of kit, lower power and torque outputs and range.

General Motors, the parent company of GMC , sold cars in our market under the Chevrolet brand until 2017, when it decided to pull the plug on its India operations. Though the company continued manufacturing for exports at its Talegaon plant in Maharashtra. Earlier this year, GM signed an MoU for the sale of the production facility to China’s Great Wall Motor Company (GWM)marking a complete withdrawal from the country. However, following the Indo-China border disputes in Ladakh, this sale has been put on hold.

The American auto giant has showed no intentions of an India return and thus, the chances of the Hummer EV making it to our market look bleak.