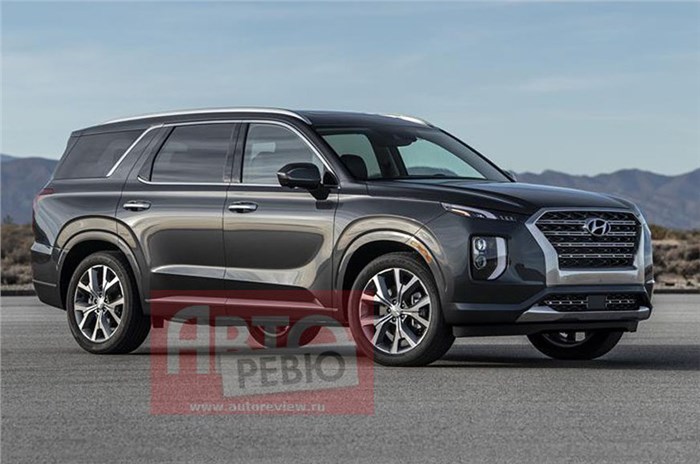 The biggest SUV yet from Hyundai will be available in seven- and eight-seat options; to likely get a V6 petrol engine and a hybrid powertrain as well.

It is supposed to be officially unveiled on November 28, 2018, at the LA motor show, but Hyundai's biggest SUV yet, the Palisade, has been revealed courtesy a leaked photo.

The Palisade closely follows the styling of the HDC-2 Grandmaster concept. It's a muscular-looking SUV, with a more squared-off shape, a sharply raked C-pillar and an intimidating face. There's generous use of chrome – on the grille, bumper and window line – that aims to add some glamour to thisover-five-metre-longSUV.

While there isn't more official information available at this time, what we know is that the Palisade is a sister car to the upcoming Kia Telluride (expected to be unveiled later this year), and is longer, taller and wider than the new Santa Fe. The Palisade will have three rows of seats, with seven- and eight-seat options on offer.

The Palisade is also likely to borrow its powertrain from the Telluride, which is expected to be a3.3-litre, twin-turbo petrol V6 making 365hp and 510Nm of torque. There could be a plug-in hybrid variant introduced later, which pairs a 270hp, 3.5-litre, petrol V6 engine with a 130hp electric motor. Hyundai could also look at adding a diesel engine into the mix for select markets, which is expected to be a more powerful version of the2.2-litrediesel motor on the new Santa Fe. An eight-speed automatic gearbox and all-wheel drive are expected to be part of the package.

Being the brand's flagship SUV, the Palisade will likely be packed to the gills with equipment, much like other Hyundai cars. The SUV's feature list could include an electrically foldable third row and a 360-degree surround view system, among other things.

While the Palisade is expected to go on sale in the US next year, there is no word on whether Hyundai has any plans to bring it to India. In the past, expensive Hyundai models have struggled to make inroads in our market, so it'll be interesting to see if the manufacturer chooses to introduce what will certainly be its most expensive SUV yet in India.

Do you think the Palisade could be a good fit for India? Let us know in the comments.