Apart from launching a new Thunder variant, Ford has also revised prices and equipment for the existing variants. 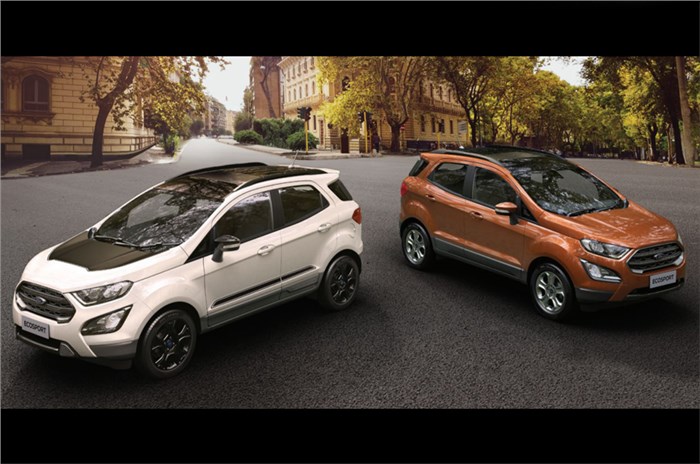 Ford has announced revised pricing for the EcoSport compact SUV, with the range now starting from Rs 7.69 lakh and going up to Rs 11.33 lakh (ex-showroom, Delhi). The price drop ranges from Rs 8,000 to Rs 57,000, depending upon the variant. Additionally, Ford has also introduced a new variant and revised the EcoSport’s equipment list. Given below are the revised variant-wise prices:

Owing to newer rivals such as the Mahindra XUV300 and the recently-launched Hyundai Venue, the EcoSport was beginning to feel a bit long in the tooth. However, with the revised pricing and the variant rejig, Ford aims to make the EcoSport compete better in the hotly-contested compact SUV segment.

As we had reported earlier, Ford has also introduced a new Thunder variant while discontinuing the existing Trend+ and Signature trims. The new Thunder variant essentially replaces the outgoing Signature trim and is priced at Rs 10.18 for the petrol and Rs 10.68 lakh for the diesel. The new EcoSport Thunder features dark inserts on the headlamp cluster, blacked-out fog lamp bezels, grille and wing mirrors, new 17-inch alloy wheels, a dual-tone bonnet, and decals on the doors. However, when compared to the Signature, the Thunder losses out on diamond-cut alloys and safety equipment like brake assist, electronic stability control, traction control and hill-hold assist.

Along with the variants, Ford has also rejigged the equipment on offer with the EcoSport. The Trend variant now gets height adjustable driver’s seat and a lighter beige interior theme. The Titanium trims too have gained the beige interior theme, along with front map lamps, while losing out on sporty alloy pedals.

The biggest equipment changes are present on the Titanium+ variant, which gets the addition of an electric sunroof, a 9.0-inch touchscreen, and fabric upholstery. While this sounds appealing, it’s worth noting that the Titanium+ now does away with interior ambient lighting, the 8.0-inch touchscreen with Ford’s Sync 3, Apple CarPlay and Android Auto compatibility, and leather seats, all of which are now exclusive to the top-spec S variants.

Being one of the oldest compact SUVs on sale in India, the EcoSport is expected to be replaced sometime in 2020 by an all-new SUV that’s currently being jointly developed with Mahindra.