The quadricycle can be registered for both, private and commercial use; CNG variants costs Rs 2.83 lakh. 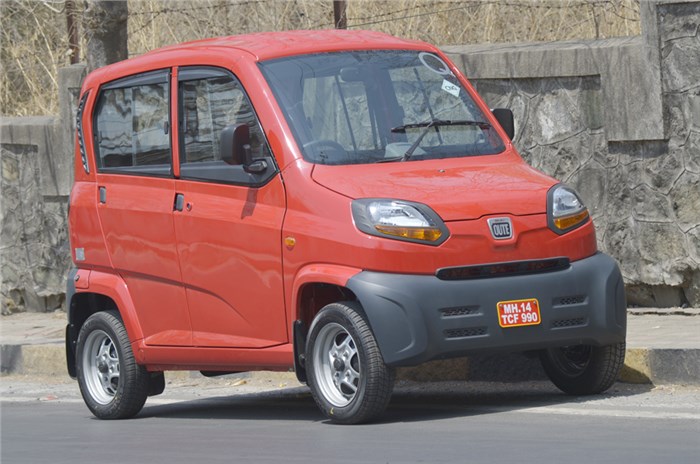 Bajaj has priced its quadricycle, the Qute from Rs 2.63 lakh. The CNG variant meanwhile costs Rs 20,000 more, at Rs 2.83 lakh (ex-showroom, Delhi). As these are ex-showroom prices, they remain unchanged for both, private and commercial buyers.

It was only in November 2018 that the Ministry of Road Transport and Highways (MoRTH) added quadricycles into the ‘non-transport’ category of vehicles. Quadricycles were previously only allowed to be used as commercial vehicles. At present, the Qute can be registered for commercial use in 20 states in India and for private use in 15. However, Bajaj has told us it is currently in the process of adding more states to the list.

While its styling may suggest otherwise, the Bajaj Qute is not a car. It is a 452kg vehicle that is powered by a 216cc, single-cylinder, liquid-cooled DTSi engine. This engine (on petrol) makes 13.2hp at 5500rpm and 18.9Nm of torque at 4000rpm at the crankshaft. On CNG, meanwhile, it puts out a lower 11hp at 5500rpm and 16.1Nm at 4000rpm at the crankshaft. As for the gearbox, the quadricycle uses a five-speed sequential manual unit. Bajaj has also limited the top speed of the Qute to 70kph and advised against taking it on expressways.

The Qute misses out on disc brakes and uses drums at all four ends. It also misses out on air-conditioning and uses fibre doors instead of ones made out of metal. Bajaj has said that the low running cost and cost of ownership, aside from the city-friendly dimensions are the Qute’s key benefits. The company claims that the Qute (CNG variant) has a running cost of Rs 1.53 per km which, according to them, is lower than that of a motorcycle’s, which is an average of Rs 2.06 per km.