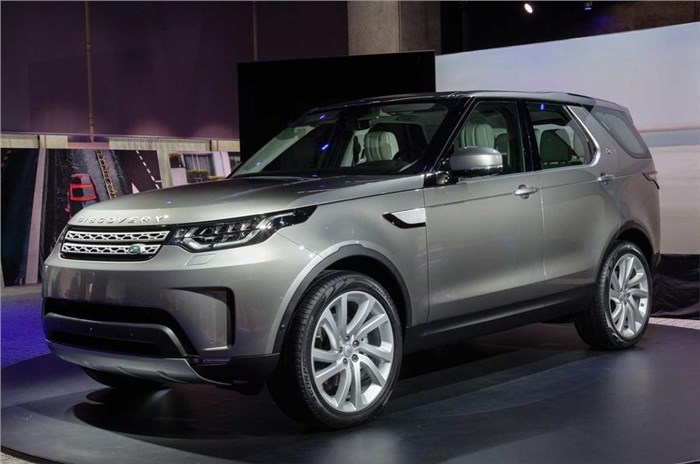 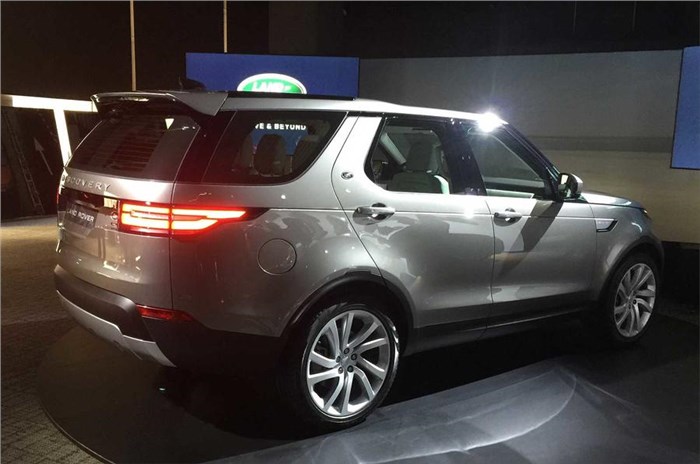 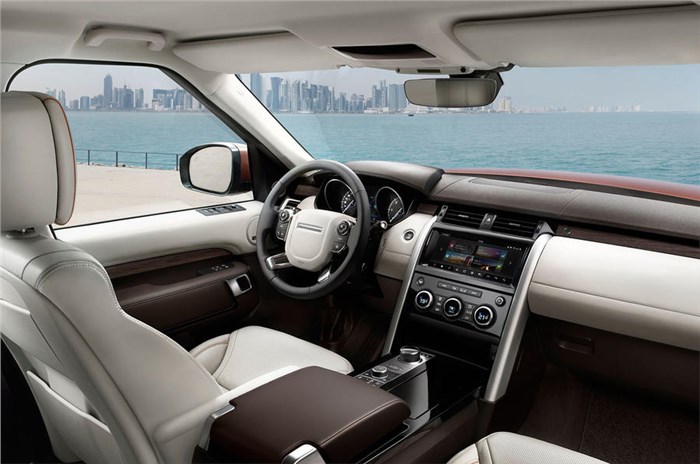 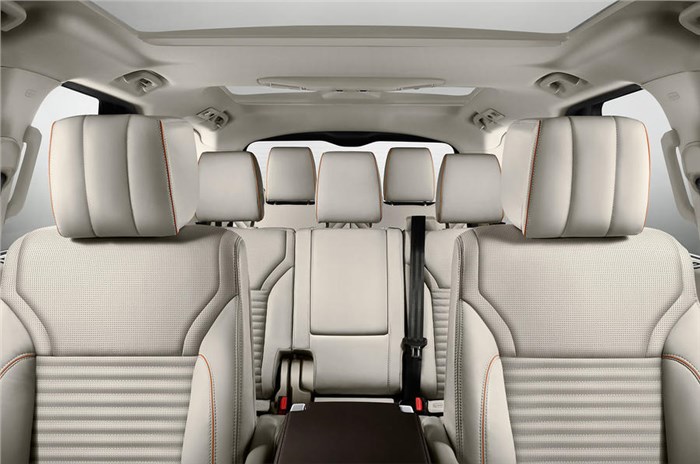 The fifth-generation Land Rover Discovery, which the company revealed just before the car’s debut at the Paris Motor Show, is bigger but a massive 480kg lighter, and claims to be more economical than the model it will replace in 2017.

Exteriors
It’s sleek and curvaceous, unlike the current model’s tough, square-jawed proportions. However, purists will miss the prominent step in the roofline that the previous generation Discoveries had. The new model’s roofline only crests subtly over the third row.

In terms of dimensions, the new Discovery is 140mm longer overall (at 4970mm) and 40mm bigger in the wheelbase (now 2923mm). However, the new frame has allowed for a 40mm reduction in roof height, even though ground clearance has improved by 43mm. Wading height too is up by 200mm to a class-best 900mm.

Interiors
Not deviating from tradition, the seven-seat SUV sticks to its stadium seating – whereby the second and third rows of seats are positioned higher than the one in front – in its now, more spacious cabin.

Land Rover claims that the Discovery is a genuine seven-seat SUV, with space for a full-size adult even in the last row. All seven seats are power-operated and can be adjusted via the car’s 10-inch touchscreen, or a smartphone app. Luggage space, with all the seven seats up, stands at 258 litres, and bumps up to 1137 litres with the last row folded down. Flip down the middle row, and you can free up 2406 litres.

Additionally, there are plenty of clever storage spaces thrown around the cabin. There’s a massive glovebox under the front arm-rest, and a smaller stowage compartment next to the pop-up rotary knob controller for the automatic gearbox.

Engines, transmission and performance
The entry-level engine is a 2.0-litre diesel unit from Jaguar Land Rover’s Ingenium range. This motor will come to India in the all-new XF. With 180hp and 430Nm of torque, the Discovery can reach 100kph from standstill in a claimed 10.5 seconds. A twin-turbo version of this engine, making 240hp and 500Nm will also be offered. This version of the SUV can complete the 0-100kph dash in 8.3 seconds.

Next up is a 3.0 V6 diesel engine that makes 258hp and 600Nm. This motor allows the car to go from 0-100kph in 8.1 seconds. There’s also a range-topping supercharged 3.0-litre V6 petrol, rated at 340hp and 450Nm, which completes the 0-100kph sprint in just 7.1 seconds. Expect the 2.0-litre Ingenium to remain the mainstay in the range. All powertrains are paired with an eight-speed ZF automatic gearbox.

Thanks to the lower weight, better ground clearance and improved wading abilities, Land Rover says the Discovery is its most capable off-roader yet.

It still gets a low-range gearbox for heavy-duty off-road use and has a standard 50/50 torque split. However, torque can be varied electronically or via the latest Terrain Response 2 system. The Terrain Response system allows the driver to adjust the characteristics of the engine, gearbox and the chassis to best suit road conditions.

A recent addition is the All-Terrain Progress Control, which lets the driver select an appropriate crawling speed for tough or low-grip surfaces.

Equipment
Standard equipment on the seven-seat SUV will include an automatic gearbox, four-wheel drive, a 10-inch infotainment touchscreen, a powered tailgate and autonomous emergency braking. There are two sunroofs, one for the middle row and the other for the third.

The entry-level variants get Land Rover’s InControl infotainment system paired to a 6-speaker audio system. Some of the features also include a 360-degree camera, parallel-park assist and a heads-up display. Top-end models will come with a better InControl TouchPro infotainment system, heated seats, up to nine USB ports, four 12V charging points, an in-car 3G Wi-Fi hotspot and a 17-speaker Meridian Audio system.

Additionally, to prevent theft, Land Rover has invented an ‘Activity Key’, which is carried on a wristband worn by the owner. When in use, it locks out all other keys.

Expected arrival
The new Discovery will hit the European markets around April 2017, so expect it to reach India by the end of next year.