The SXR160 will now arrive in November, and the SXR125 is expected to follow shortly after. 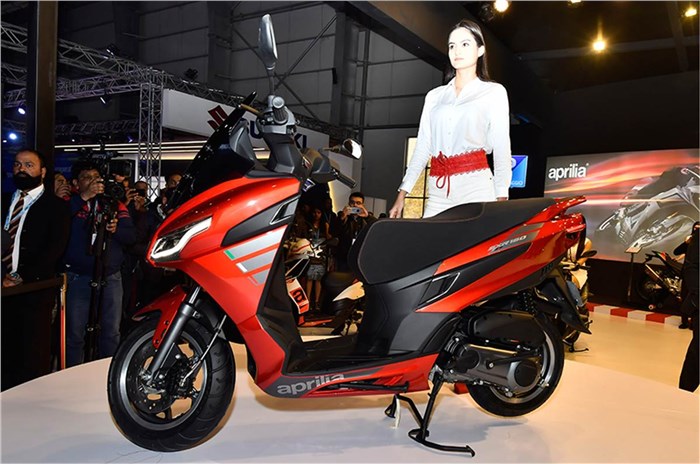 Back in February, at Auto Expo 2020, Aprilia revealed the all-new SXR for India. Like the current SR range, the new SXR models were designed and developed in Italy was to be available in 125cc and 160cc form, and was scheduled to go on sale in September. However, due to obvious reasons (COVID-19), its launch has been delayed and the Piaggio Group has now confirmed that the SXR160 will go on sale in November, while the SXR 125 will arrive a few months later.

The SXR125 and SXR160 were previewed by the Cross-Max Concept. The scooter follows a maxi-scooter-like design language, as seen on the SRV850 that was once sold in India. Elements like the elongated footboard and large seat – much like the Suzuki Burgman Street – are an indication of this. The SXR also uses a unique, sporty-looking headlight unit that is inspired by the new RS 660 sports bike. This accentuates the wide front-end and merges well into the overall design, while tail section is similarly sharp and stylish.

Both models will feature a multifunction digital instrument cluster with smartphone connectivity, LED twin-pod headlights and a vast array of accessories.

What engines will power the scooters?

Until very recently, the larger capacity SR used a 154cc engine that has now grown to 160cc with the advent of the BS6 norms and that’s the engine that will be used on the SXR range, along with the smaller 125cc engine. The SR models are the manufacturer’s sporty, performance-oriented offerings and we understand that the SXR will have similar power and torque figures.

Does it share its chassis and hardware with the rest of the SR range?

For now, we know that the chassis and hardware elements like the suspension and brakes will be similar to that of the rest of the SR range. We also know that the steering rake angle is more relaxed, which has resulted in a longer wheelbase. What we hope to see is a more forgiving suspension set-up to offer more comfort over the SR.

The SXR125 and SXR160 will feature 12-inch wheels in comparison to the 14-inch units on the SR range.

When do the scooters go on sale?

Like we said above, the pandemic has resulted in a delay in the scooters’ launch. The SXR160 will go on sale in November and the smaller-capacity SXR125 will follow a few months later. At the time the scooter was unveiled, Piaggio mentioned that it was looking to position the SXR between the Vespa and the Aprilia SR range, and its pricing will reflect this. For reference, prices for the current BS6 Vespa range start at Rs 93,000 and go up to Rs 1.3 lakh, while the Aprilia SR range starts at Rs 86,000 and goes up to Rs 1.14 lakh (ex-showroom, Delhi).