TVS has big plans for its latest acquisition, Norton Motorcycles; the British brand could also be coming to India. 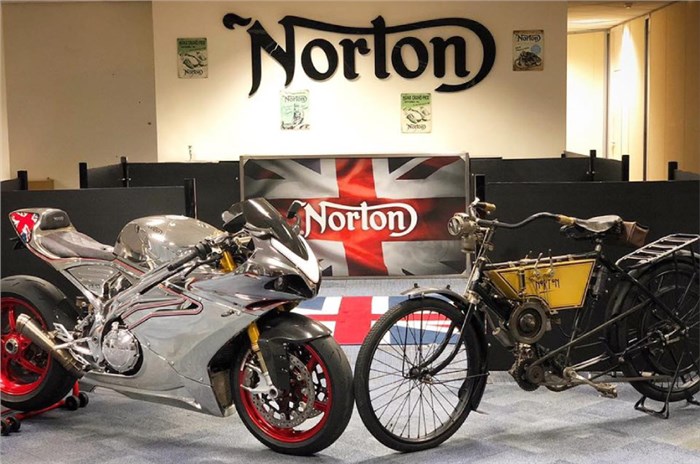 Acquisition of an iconic brand becomes a big and historic milestone for any company. More so, if it has its roots in a humble 50cc moped and the brand being acquired is Norton – the 122-year-old British motorcycle company.

The Rs 153 crore acquisition of Norton Motorcycles by TVS Motor a week ago is the latest example of a major inorganic move in the automotive world. Norton Motorcycles went under administration in January this year, but TVS Motor had a yearning for it for longer. “Its tremendous history, its heritage, its bespoke craftsmanship, its focus on developed countries and the loyal customer base that it has, this is something that’s really been attracting us for some time, and I’m glad that now it became possible for it to happen,” reveals Sudarshan Venu, joint managing director, TVS Motor, during the company’s first media interaction after the announcement of the acquisition on March 17. The business move is also the first major acquisition under the leadership of the third- generation entrepreneur.

The Castle Donington-headquartered Norton Motorcycles has a rich legacy and a strong brand equity, but a poor business. It also got mired in fiscal mismanagement allegations, which made Norton’s ride unsustainable. Under the deal agreement, TVS Motor, which plans to “revitalise the glory of this brand, to build it back to its original place and take it into the future”, does not inherit any of the liabilities, says Venu.

Norton can be counted as one of the exclusive brands across sectors. Its volume currently is quite small, even by premium brand standards. Last year, it produced only 400 motorcycles. That’s equivalent to less than an hour’s production numbers of volume brand TVS, which rolls out over four million units a year.

Though it has come under the ownership of TVS Motor, Norton Motorcycles’ operations will be kept “at arm’s length, with a focus on a unique customer segment” and will be run independently by a separate management team. An interim management team with former Harley-Davidson Europe MD, John Russel, as CEO has already been put in place. “He understands the two-wheeler industry very well. He has a strong connect with customers and he understands the products also very well and I am sure that John will do a great job right from day one,” says Venu.

To retain its British identity and heritage, Norton motorcycles will continue to be designed and manufactured in the UK. Manufacturing operations will be shifted to a new facility as the lease agreement in the current facility will expire in six months. The Norton Motorcycles acquisition not only gives TVS Motor additional capabilities in engineering, but it is also set to strengthen the manufacturer’s ties with the Warwick Manufacturing Group (WMG) at the Warwick University. TVS Motor has been working with WMG for many years, especially in the field of advanced engineering. “I think with Norton we can further strengthen this relationship and add value to Norton as well,” says Venu.

Norton Motorcycles has 76 dealers spread across 21 countries. Like other high-end brands, it also enjoys its share of loyal, passionate customers. They will also have a crucial role to play in TVS Motor’s endeavour “to revitalise the glory of this brand, to build it back to its original place and take it into the future”. Venu says that many customers from various countries have already reached out to the company. “We want to really connect with the loyal and passionate Norton customers around the world and engage with them as we look to rebuild this brand,” he says. This could also include taking inputs for building the brand portfolio.

Talking about brand portfolio, Norton Motorcycles’ portfolio consists of motorcycles with engine displacement of 800cc and above. Its line-up includes three models – Commando, Dominator and V4RR, and variants. The management team’s immediate focus is to restart manufacturing operations and start the scaling up journey.

“There’s a huge opportunity for us to scale up and create value in this process,” says Venu. Starting with Norton’s home market, America, Australia, Malaysia and Thailand are the key markets that will lead Norton’s resurgence ride. India, where Norton made its debut in 2018 through an alliance with Pune-based Kinetic Group’s multi-brand motorcycle business Motoroyale, is set to re-enter the list of the markets. “Hopefully, India and other emerging markets will be part of this soon,” says Venu.

Under the previous ownership, Norton Motorcycles had plans to scale up its business and be a global player with significant volumes. Atlas, a 650cc-engined motorcycle model, was planned to be the first one to lead that strategy. As part of that strategy, it had signed a joint venture (diluted recently) with the Kinetic Group for local manufacturing and sourcing of some parts. Some of those plans could see a change now.

The Norton brand’s legacy includes the good connect with consumers at the top end (800/900cc and above) of the motorcycle market. However, there is a global trend of big motorcycle brands entering new and smaller displacement segments too, while maintaining its brand characteristics, in order to scale up business. Something similar could be in store for the Norton brand. A detailed plan is expected to be announced shortly. As Norton Motorcycles’ management prepare to kick-start a new chapter for the niche and premium brand, there are also new opportunities for some to be part of its supply chain. “They will work with the suppliers who meet the global standards that we will ensure that we will be delivering to our customers. Where there are some synergies with TVS, we will definitely leverage that,” says Venu.

The Norton acquisition is TVS Motor’s third association with an international two-wheeler brand. Its journey as a motorcycle maker started with Suzuki in the early 1980s. The joint venture ended in the early 2000s. In 2013, it started an alliance with BMW Motorrad for midsize motorcycles, which continues. “We have a very special relationship with BMW which we cherish very much. In our view, Norton is a totally different customer group and we will cater to that group effectively, and we will support Norton to do that,” says Venu.

Interesting times ahead not only for the Indian manufacturer and the British brand but also for the motorcycle industry.