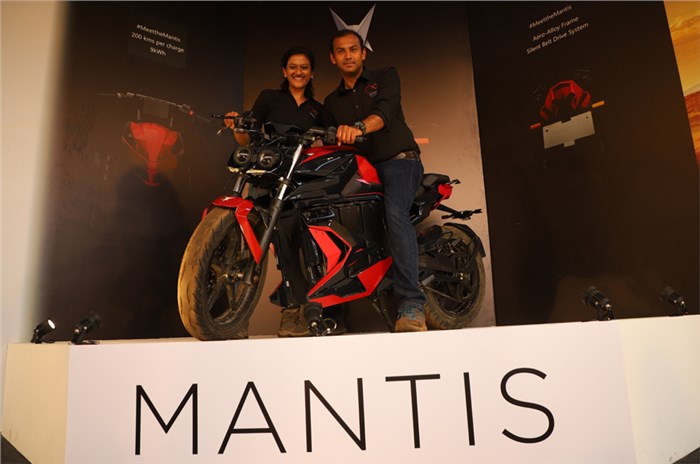 Last weekend, at the sixth edition of India Bike Week in Vagator, Goa, Bengaluru-based start-up Orxa Energies revealed a prototype of its Mantis e-bike for the very first time.

Orxa Energies was founded back in 2015 by Ranjita Ravi, Prajwal Sabnis and Amrudesh Santhanam, with an aim to build an electric sports bike. The company is a part of the Airbus BizLab acceleration programme where start-ups and Airbus intrapreneurs speed up the transformation of innovative ideas into businesses. Apart from its first product, the Mantis, the start-up is also working on a trike and on improving their battery technology. Orxa Energies claims that, in 2019, its battery packs were tested and validated on five different vehicle platforms.

What will immediately draw your attention to the Mantis is its extremely unique and almost absurd styling. Drawing inspiration from its namesake, the Mantis uses twin-pod headlights that resemble bug eyes, with underlying DRLs giving it a fang-like appearance. Complimenting this design philosophy is the use of some very bright colour schemes that will ensure this motorcycle will not go unnoticed on the streets. The swingarm of the e-bike is body coloured too! Towards the mid-section and rear of the Mantis, you’ll find that all the lines follow a similar upward incline angle, giving the bike a rather aggressive and sporty stance.

The Mantis’ specifications revealed by Orxa Energies show that it is powered by an electric motor that’s “designed for 25kW peak power.” The company has also claimed impressive performance numbers – a 0-100kph sprint in 8sec, with a top speed of 140kph. The Mantis weighs 175kg and that’s relatively light for an all-electric motorcycle. The company says that this is due to the use of a lightweight aluminium frame. Suspension duties are handled by a 41mm telescopic fork and a monoshock.

The company says it has developed its lithium-ion battery pack in-house, and that it has a total storage capacity of 9kWh. The battery pack consists of six swappable, modular units, and weighs a substantial 63kg in total! On a full charge, Orxa Energies claims a real-world range of 200km, which is certainly more than what most other electric two-wheelers in India offer at the moment.

The Mantis will first be launched in Bengaluru, with its price announcement set to happen in mid-2020. For now, Orxa Energies has revealed that the Mantis will be priced between Rs 3-4 lakh. Considering the claimed performance, this e-bike it will find itself in a space that will soon be occupied by the promising Ultraviolet F77 when it also goes into production later next year.