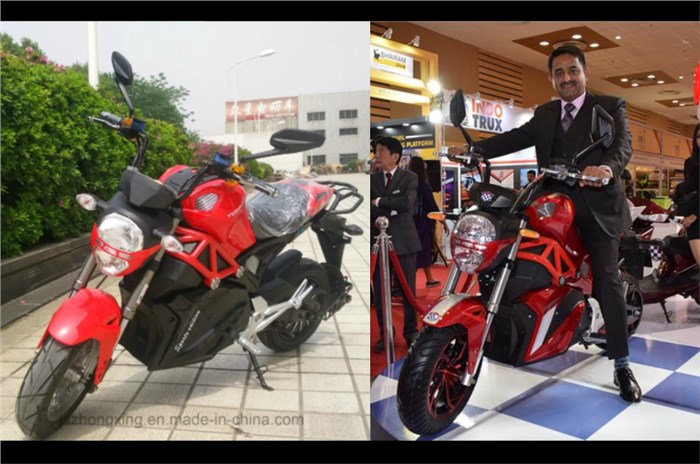 A couple days ago, Okinawa sent out a press release stating that its first electric motorcycle, the Oki100 will be a fully localised product. It mentioned that “except for the battery cells, all the components of the upcoming Oki100 will be manufactured in India.” The Oki100 was first shown at the 2018 Auto Expo, where the company claimed that it would have a top speed of 100kph and be able to cover a range of 150km on a full charge. Visually, the bike is quite small, about the size of a mini-bike like the Honda Grom, but the Oki100’s design seems to take liberal influence from the Ducati Monster.

When we asked whether the product was designed and developed in India, we were told “the product has been conceptualised and designed locally at our R&D department. Once launched, this indigenous product will be a smart alternative to IC engined motorcycles”.

If you’ve been following Autocar India’s coverage of Okinawa products over the past two years,  you will know why we have asked these questions. In fact, we broke the story that Okinawa was selling rebadged scooters from a Chinese company called Luyuan in India. The entire Okinawa range available today, including the Cruiser that was unveiled at Auto Expo 2019 can be found on the Luyuan website.

After some digging through the web, we found that just like with its scooter offerings, there are websites offering a near-identical EV to the Oki100. One of them is Hanbird and the other is the Jiangsu Zhongxing Motorcycle Co. On the latter’s website, the model is listed as the ZX-Monster, which is a rather blatant choice of name, considering which Italian bike’s design this Chinese EV has adopted.

Interestingly, these bikes can be purchased in bulk for a price ranging between $620-760 each. Jiangsu Zhongxing Motorcycle’s website also says the “specifications can be customised according to your local road condition and your special requirement.” and that the company can even make 3,000W or 5,000W motors that will allow a top speed of 100kph – exactly what Okinawa claims the Oki100 will be capable of.

Now, this doesn't necessarily mean that the company's claim of a fully localised product is false. A spokesperson for the company has said “Some of the raw material might have been imported from Japan, but our R&D team has left no stone unturned to produce a product which is fully Indian”.

The raw materials may well be locally sourced, and we’ll have to take Okinawa’s word for it. However, just like before, our problem lies in the fact that Okinawa continues to claim that its vehicles are designed and developed in India, when that does not seem to be the case.