The Italian bike maker has opened its first showroom in Pune. 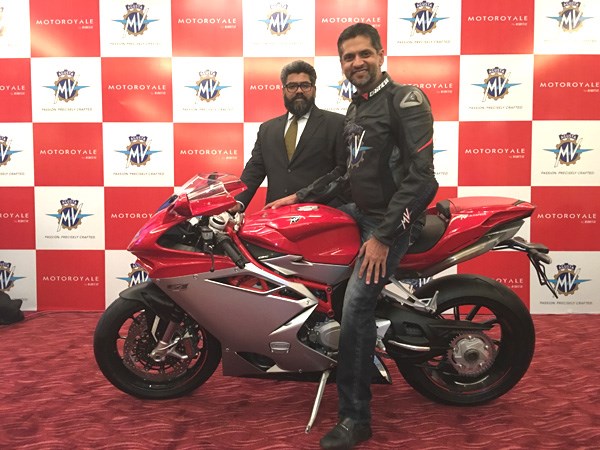 MV Agusta, in collaboration with Kinetic Group, has officially made its way into India as Motoroyale. It opened its first showroom in Pune and launched five of its products, namely the F4 at Rs 26.87 lakh; the F4 RR at Rs 35.71 lakh; the F3 at Rs 16.78 lakh; the Brutale 1090 at Rs 20.10 lakh; and the 1090 RR at Rs 24.78 lakh (All prices ex-showroom, Pune). The F4 RC, the raciest version of the F4, is expected to be priced at Rs 50 lakh (ex-showroom) and will be launched later this year. While the showroom opens tomorrow, bookings for the bikes can be made on www.motoroyale.in.

Among the offerings, the F3 800 is locally assembled as a Semi Knocked-Down unit (SKD) at the bike maker’s Ahmednagar facility. It is powered by a 798cc, three-cylinder motor that produces 148hp and 88Nm of torque that is mated to a six-speed transmission. Standard features on the F3 include ABS, traction control and multiple riding modes. The F3 800 RC, a racier limited-edition version of this bike will be launched later this year. The upgraded version of its naked sibling, the Brutale 800, is already being homologated for India and will be launched in Q1 2017. Since the new Brutale 800 will also be brought in as an SKD unit, MV Agusta assures that it will be priced aggressively. The company also plans to start CKD assembly of its 800s, but at a later stage.

Meanwhile, MV Agusta’s bigger, four-cylinder-engined models – the F4, F4 RR, Brutale 1090 and the 1090 RR – will be imported from Italy as Completely Built Units (CBU). The company, however, plans on locally assembling these bikes at a later stage.

As for expansion plans, MV Agusta targets to open six showrooms in 2016, starting with Pune, moving on to Ahmedabad, Bengaluru, Delhi, Chennai and Mumbai and aims at selling about 300 bikes this year. The bike maker plans on opening four to five showrooms in 2017. In addition to MV Agusta, Kinetic plans to bring more premium brands to India soon.