The Vieste 300 and Sixties 300i are the Hungarian brand’s debut products for India and have been priced on par. 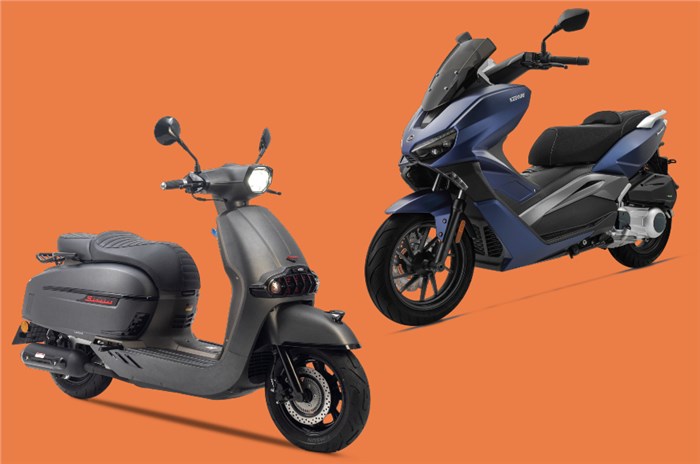 Suspension duties on both models are handled by a telescopic fork at the front and hydraulic shocks at the rear. Ground clearance on the Vieste 300 and the Sixties 300i stands at 135mm and 140mm respectively.

The Vieste 300’s design screams maxi-scooter from the get-go. The large apron, tinted visor, headlamp unit with four LED projectors, LED tail-lamp and butch proportions give it the quintessential maxi-scooter look. It also gets keyless operation, something seldom found in the scooter segment in India. The three colour options – black, blue and white – are only offered in matte finish. Instrumentation on the Vieste 300 is handled by a display that has both digital and analogue elements.

On the other hand, the Sixties 300i takes an approach opposite to its maxi-scooter-styled sibling and opts to go for a more retro design. The hexagonal LED headlamp, grille on the front apron, split seats, and even down to the font, this design is decidedly more old-school in philosophy. The multi-function ignition switch is, perhaps, one of the few modern design cues here. The three colours on offer – light blue, white and grey – are, again, available only in matte finish.

Keeway Vieste 300, Sixties 300i: competition; or rather, the lack of it

At this price point and these specsheet numbers, it is hard to draw a comparison to any other scooter currently sold in India. These scooters are in a niche of their own, sitting well above the Yamaha Aerox 155 (Rs 1.37 lakh) and Aprilia SXR 160 (Rs 1.39 lakh), and much, much below the Rs 10.40 lakh BMW C400GT. At this price point, these scooters are even more expensive than something like the TVS Apache RR310 (Rs 2.59 lakh), BMW G310R (Rs 2.67 lakh) and Honda CB300R(Rs 2.77 lakh). Granted, these bikes aren’t exactly the intended competition for the Chinese-owned Hungarian machines, it does make the pricing a little harder to swallow.

Keeway and what’s next

Keeway is a Hungarian brand formed originally in 1999, presently owned by the Qianjiang (QJ) group based out of the Zhejiang province, China. QJ is also the parent company of the Italian marque Benelli. Keeway is said to have a presence in 98 countries with a range of scooters, motorcycles and ATVs spanning anywhere between 125cc to 1,200cc.

Keeway has also partnered up with Adishwar Auto Ride India (also a partner of Benelli). Both Keeway and Benelli will use the assembly plant as well as the network of 40 dealers across India.

For India, Keeway plans to introduce eight models in 2022. Another thing to note is that the pricing for their cruiser – the Keeway K-Light 250V – is yet to be announced, so watch this space.

What do you think of the pricing for the Keeway scooters? Let us know in the comments section below.