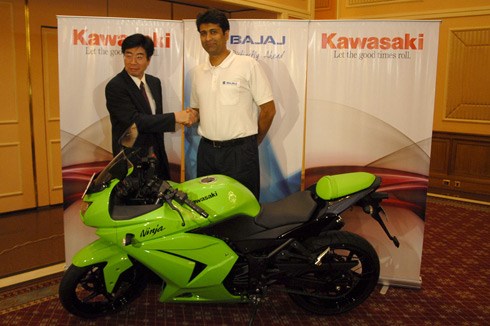 Japanese two-wheeler major Kawasaki has announced the launch of its new Indian subsidiary, India Kawasaki Motor Pvt Ltd (IKM). IKM, which will be based out of Chakan, Pune, has been set up with an investment of Rs 5 crore.

IKM will be involved in the import and sale of Kawasaki motorcycles with displacement greater than 250cc. While the company is tight-lipped on the models that will be sold in India, one can expect bikes from Kawasaki’s supersport, sports and cruiser line-ups to be available in the near future. At present, the Ninja 250R is Kawasaki’s sole product available in the Indian market.

Depending on market conditions the bikes will be brought in as CBUs (completely built units) or CKDs (completely knocked-down units). CKD assembly will take place at Kawasaki’s long standing technical partner Bajaj Auto’s Chakan plant. As with the Ninja 250R, the new bikes will be sold and serviced through Bajaj Auto’s premium Probiking outlets.

Sales in the Indian 200cc plus motorcycle segment are expected to touch 30,000 units this fiscal. With the Kawasaki Ninja 250R selling in the region of 90-100 units per month, IKM looks set to achieve its sales target of 1000 units per annum.