Can the older Hayabusa hold its own against Kawasaki's modern ZX-14R? 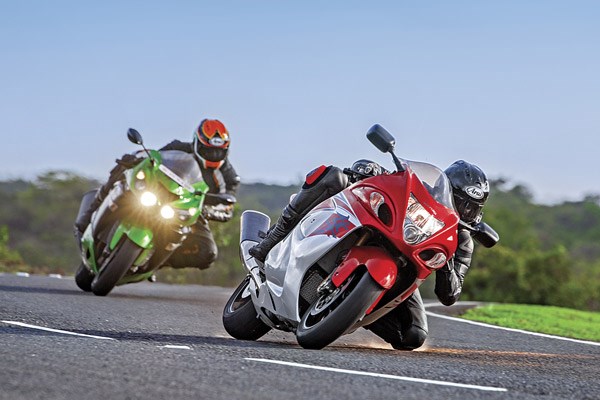 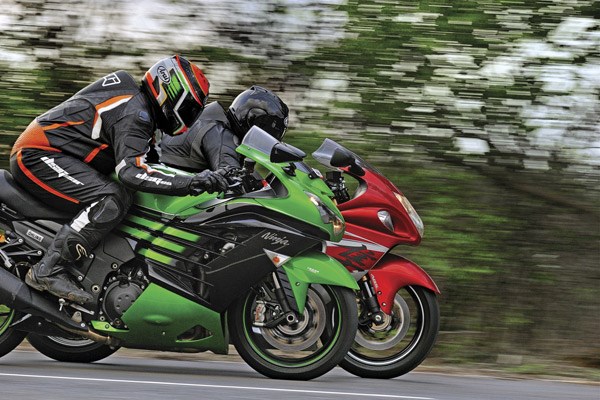 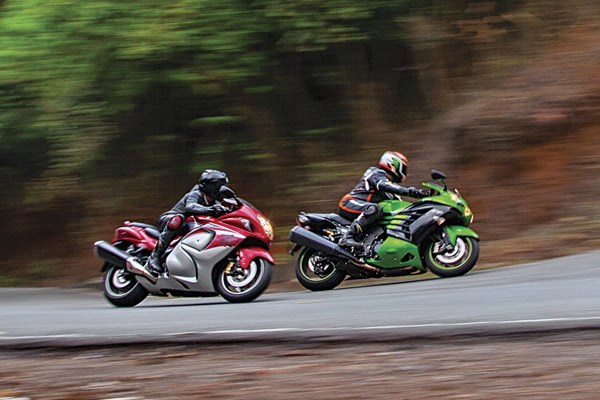 You’d be happy to ride both bikes to faraway places. But the Kawasaki will be kinder to your back on these long hauls. 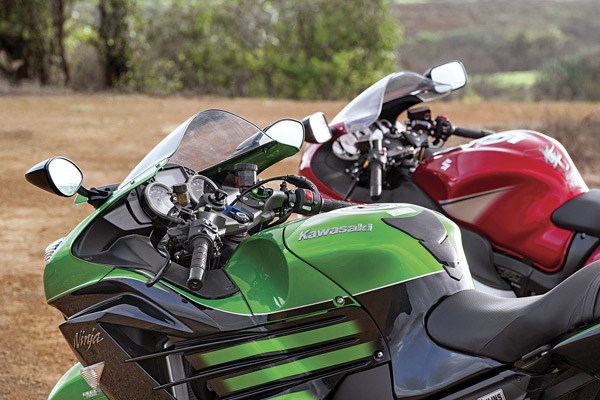 The differences are subtle, but the clip-on ’bars’ angles shape the characters.

On drag racing strips the world over, Kawasaki’s second-generation ZX-14R has proved that it is faster than Suzuki’s legendary Hayabusa. In the world of racing, where the second fastest is the first of the losers, that is a bitter pill to swallow. But Indian riders will now have to carefully weigh up the worth of saving a few tenths of a second and the bragging rights that the ZX-14R offers against the made-in-India Suzuki’s substantially cheaper price tag. But we aren’t here to pick the better deal, or the faster motorcycle. We are looking for the more exciting motorcycle for Indian riders and Indian conditions. So, which one is it?

It’s hard to compare these two motorcycles without setting the mood. And in fine style, let’s get to that first. You see, the arrival of Kawasaki’s monstrous H2 in 2015 pushed the definition of speed to a more elevated stratum. A move that relegated the Kawasaki ZX-14R and Suzuki Hayabusa as the past masters? Yes. But have these two icons lost their sheen? It doesn’t seem so. If anything, their relative accessibility (read, lower price) when compared to the H2, makes them even more appealing. The Suzuki Hayabusa though must wear an extra smug smile as it still holds the official record as the fastest production motorcycle in the world. After all, post AD 2000, Japanese motorcycles have had their speeds voluntarily capped at 299kph.

This must be cause of some angst in Team Green as the ZX-14 made its debut in 2006, well after the gentlemen’s agreement to limit speed came into effect and hence, it couldn’t lay claim to the Hayabusa’s title. Although the second-generation motorcycle abided by the rules, it attacked the Hayabusa ruthlessly. Outright performance jumped to a whole new level of nastiness; so much so, that an ‘R’ was added to its name. While the ZX-14R looked familiar, everything was revamped. Displacement increased and along with that, power jumped to a massive 210hp. Of course, this meant thoroughly revised internals and exotic materials. The hi-tech monocoque chassis was strengthened, the wheelbase was lengthened for greater stability and the introduction of traction control along with power modes made it properly modern. In 2016, Kawasaki went one step further with the inclusion of Brembo M50 Monoblocs brakes at the front and an Ohlins rear damper.

The Hayabusa first wowed the world in 1999, and the second generation rolled out in 2008. The revamped Hayabusa boasted a bump up in displacement from 1,299cc to 1,340cc – like the 14R – thanks to a longer stroke. This necessitated updates to the engine’s internals like lighter pistons, new connecting rods, new materials, titanium valves and a slipper clutch. The chassis, however, remained largely unchanged, even as the body work was extensively redesigned for better aerodynamics. And, Suzuki didn’t offer traction control. Nearly eight years on, on paper, the Hayabusa is starting to seem a bit old.

We spent a few days with these two iconic motorcycles and by the end, it became apparently clear that these two models, although aimed at the same target, approach it from very different angles. There are plenty of clues as to what each motorcycle is about and when it all stitches together, it is like an epiphany.

There’s no escaping the sense that the Hayabusa is ageing; take a look at the mirrors. Pure 1980s. The updated design is distinctive and connects to the original ’Busa easily and looks a bit bulbous. The fairing sits wider as it wraps around the perimeter frame and adds to the sense of mass. The ZX-14R looks modern and tightly packaged. Its over-the-engine monocoque frame gives it a slimmer design. But when you look at the specs, it turns out that the ZX-14R is the heavier one, by just a few kilos. Although, when you wheel the bikes around a parking lot, the Kawasaki, with its slightly lower seat height, feels easier to handle.

Hop onto the saddle and get going, and the surprises continue.Incredibly, it is the Hayabusa that feels slim and snug. You lean forward on the handlebars and the footpegs are pulled up and back, creating quite a racy seating position that suggests you attack corners right away. Nonetheless, it is more relaxed than a full-blown supersport. Once on the highway, with the wind blowing at you, coming to terms with the seating position doesn’t take too much time.

When you hop from the Suzuki onto the Kawasaki, the differences are startling. The 14R feels like the bigger bike because of the wide tank. Your thighs have to work harder to clamp on as well. The Kawasaki, on the other hand, sports a far more easy-going seating position and is clearly the more comfortable motorcycle to go road-tripping on. No wonder then, that the Kawasaki gets a long single-piece seat while the ’Busa has a split seat.

After some time, my plate-sized eyes start to shrink back to normal. This is after several runs on the ZX-14R to get a good 0-Vmax run. With power mode set to Full and traction control for minimal intervention, the ZX-14R has been bludgeoning my confidence. While traction control is taking care of the launch, the front wheel is threatening to leap up into the air as the motor get closer to its 12,000rpm limiter. And, out of an acute sense of survival, I have been short shifting to keep both wheels on the ground at over 200kph.

You’d be happy to ride both bikes to faraway places. But the Kawasaki will be kinder to your back on these long hauls.

Having gained some familiarity with the outright potency of this mega in-line four-cylinder engine, my brain, now squirming out of shock, starts to slowly process the information. I bump up the rear preload via the handy adjuster, and keep a firm eye on the rpm needle as I give it another shot. Whoosh. Without any announcement or drama, the ZX-14R rockets off the line. Despite the knackered tyres and the wind, the Kawasaki remains unfazed and bullies my brain to shutdown once more.

Without traction control, getting the ’Busa off the line requires some care. Rev too high or dump the clutch too quickly and the front wheel will soar in an instant. Let the revs drop too much and the engine bogs a bit. Get that right and the rest is easy in comparison. In the most potent of the three engine maps, power is delivered in one clean sweep and acceleration is blinding. However, getting the best out of the Hayabusa seems all too easy when compared to the 14R. From 0-100kph, it runs just two-tenths of a second behind the brutal 14R.

Ridden at highway speeds, both motorcycles are an absolute hoot. Calm and relaxed, and with a mind-bending ability to go from 80-180kph in just a few moments. The ZX-14R’s trump card is its torque, and it pours thick and smooth from 4,000rpm and builds into a meaty mid-range and a staggering top end. Even as you rush ferociously forward, the engine remains butter smooth. Ride calmly and this dual counter balancer-equipped engine feels electric in terms of its refinement. On both motorcycles, the smooth six-speed gearboxes remain largely unused when commuting. The ’Busa’s engine feels a bit more mechanical, with a light tingle at the bars. However, the snort from the intake every time you open the gas is ultra-addictive.

With outright performance being the main objective of these two motorcycles, it’s no surprise that straight-line stability on both motorcycles is mighty impressive. To go with the more relaxed seating position, the Kawasaki also offers the cushier ride quality. The suspension setup rolls over bumps with a pleasing softness. In comparison, the ’Busa’s suspension setup seems more controlled, but it doesn’t get ruffled over the rough stuff either. Contrary to our expectations, over broken roads, the ’Busa treated its rider better than the Kawasaki, which transferred more vertical movement to the rider.

However, where the Hayabusa really caught us by surprise was in its hunger for corners. Yes, it loves them. Sure, it isn’t as sharp as a litre-class motorcycle, but for its size, the Suzuki is breathtakingly good. After the Kawasaki, the ’Busa feels all too eager to drop into corners. Just a prod will tip it in and then it tracks clean and sure, giving you the confidence to ride harder still. However, on tighter corners and switchbacks, the weight becomes apparent and it takes smoothness and some effort to rip through it all. Which, you can. The slightly sharp response from the engine when you roll on the gas mid-corner is a foible of the drivetrain that you need to get used to.

The Kawasaki isn’t as corner happy. Its weight feels obvious at the ’bars. Even when you tip it in, it requires some work to keep it on course. Attacking tighter corners feels forced on the ZX-14R, which prefers to blast through long sweepers instead. The Kawasaki’s M50 units were thankfully up to the task of shedding speed rapidly and with a crisp feel. The ’Busa’s Brembos also offered ample bite, but they could do with a bit of the M50 magic.

You really can’t go wrong with either of these motorcycles, but we’ll admit, we do have a favourite. The Kawasaki ZX-14R is a fantastic long-distance machine, but we’d be hard-pressed to find stretches where that performance could genuinely be uncorked safely. Yes, it has traction control and for some people that will be a big enough reason to spend the extra dough on the Kawasaki. If you are one of them, by all means, go ahead.

But if it was our money, we’d be looking long and hard at the Suzuki. The lack of traction control is a big miss, but in our experience, the three power modes and the linear power delivery make up for that, somewhat. In the real world, the Suzuki is surprisingly predictable, plenty fast and comfortable enough. But it is the Hayabusa’s ability to offer a thoroughly engaging sports bike experience along with epic performance that makes it stand out. Its price tag, lower by some Rs 4 lakh (ex-showroom), dulls the Kawasaki’s performance advantage sufficiently. As such, the Suzuki Hayabusa is dishing out a flavour that Indians love, more thrills for less.