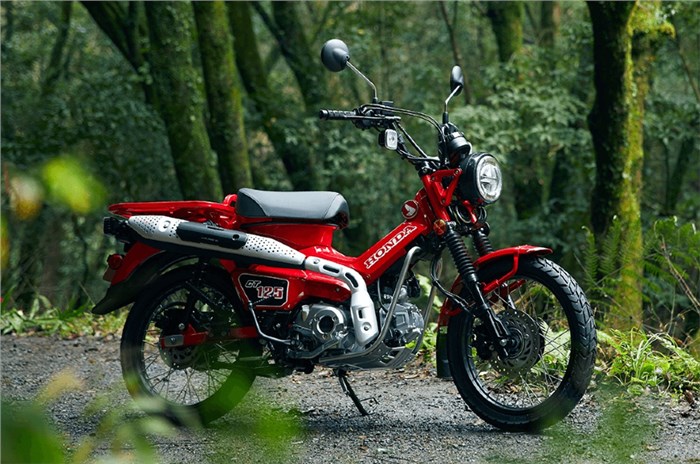 High-mounted exhaust and air-intake duct show that the CT125 Hunter Cub is designed to have some off-road capability.

With COVID-19 forcing the cancellation of the Tokyo motor show and the Osaka motor show, Honda took its launch of the CT125 online. The off-road-oriented moped has been priced at 440,000 Japanese Yen (Rs 3 lakh), making it not only the most expensive moped in the company’s line-up, but also one of the priciest 125cc two-wheelers in Honda’s line-up.

It costs more than the Super Cub C125, PCX 150, Monkey 125, and the CRF125F dirt bike as well. The only 125cc model more expensive than the CT125 in Honda’s line-up in Japan is the CB125R. That said, the hefty price tag does get you one of the most unique mopeds on sale at the moment. While it may not look like it at first glance, closer inspection will reveal that the CT125 is designed to have some off-road capability. The steel front fender, high-mounted exhaust and air-intake duct show that it will be able to endure some rugged use. Honda itself has called it a “trekking bike which is equipped with functions that enable the rider to enjoy it in the outdoors.”

Powering the CT125 is an air-cooled, OHC, single-cylinder unit that makes 8.8hp at 7,000rpm and 11Nm at 4,500rpm. This motor comes paired to a 4-speed gearbox. Despite it's compact proportions, the CT125 isn't very light with a kerb weight of 120kg - that's nearly 40kg more than the similarly sized TVS XL 100. The 165mm ground clearance is also a bit of a let-down considering its off-road intentions. For reference, the Honda Activa 6G has a ground clearance of 171mm. If this will hinder the CT125’s off-road ability is something that remains to be seen.

The Honda CT125 has been launched only in Japan at the moment and will slowly make its way to other international markets in the months to come. Given the model’s premium price tag and how price-sensitive our market is, it will most certainly not be making its way to India anytime soon.