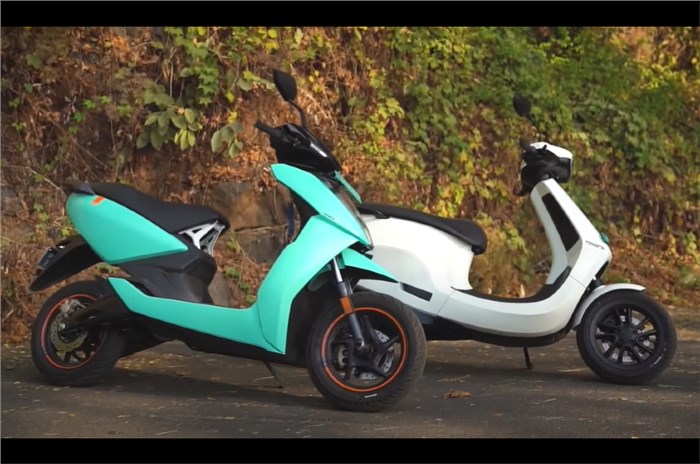 Electric scooters are rapidly gaining popularity across the nation.

With global crude oil prices skyrocketing, it’s only a matter of time before this price rise is passed on to the Indian consumer. Add to this the supply chain disruptions following the Ukrainian crisis and the challenges for India’s two-wheeler market are just going to increase.

Manufacturers of motorcycles and scooters will now have to brace themselves for higher input costs while steep petrol prices will push potential buyers to ditch the pump for the plug. Electric has been gaining momentum in recent months and this trend will only gain traction going forward.

For traditional two-wheeler makers, who have been reeling under a protracted slowdown, it is going to be a double whammy. They will have to deal with the acceleration in the shift towards electric, while also absorbing the impending increase in input costs to the extent that’s possible.

Amidst poor demand, it is going to be extremely tough for them to pass this burden entirely on to buyers. As it is, the commuter segment has seen steep price hikes in recent times largely due to tougher regulations on emissions and safety. Sales have collapsed as a result and the aftermath of the pandemic has only made things worse.

Industry leaders on rise of EVs due to fuel price rise

Diego Graffi, chairman and MD of Piaggio Vehicles, has his own take on the issue. “Companies will have to bear higher costs but it is unlikely if they can pass these on fully to customers,” he says. One is already seeing disruption both on costs of acquisition of these components and their availability, he adds.

Over the last two years, Piaggio and its manufacturing counterparts in the industry have been grappling with the challenges of costs for an ICE (internal combustion engine) vehicle. It started with the Bharat Stage VI (BS6) emission norms which entailed expensive add-ons. The price tag of vehicles obviously increased and this was accompanied by the constant rise in fuel prices.

Consequently, says Graffi, customers could not absorb these twin shocks and demand crashed both for two and three-wheelers. In the case of the latter, the passenger segment lost out big time during the pandemic, with the closure of offices, schools and malls, leading led to a massive slump in passenger traffic.

Piaggio sells e-three-wheelers under the Apé E-Xtra in the cargo segment and Apé E-City in the passenger segment. Graffi is optimistic about the road ahead for EVs in the current scenario. “There is a strong correlation between escalation of fuel prices and increase of adoption in EV vehicles," he concedes.

Apart from lower operating costs, EVs have also benefited from incentives in the form of FAME 2 and fiscal sops offered by various state governments. In the case of two-wheelers, these have helped bridge the on-road price of an electric scooter, bringing it on par with a 125cc ICE model, says Graffi.

Speaking about the issue, Naveen Munjal, MD of Hero Electric, says, "We now have multiple vendors we transact with that allow us to keep the production going and meet the demand of the market. However, we have seen multiple disruptions, and as OEMs, we have now figured out local players who can cater to the demand that does not influence the supply chain as a whole. With an increase in demand for electric two-wheelers, the supply chain industry is marginally strained, which will be in order once manufacturing capacity and other facilities pick up the pace."

According to Harshvardhan Sharma, head — Auto Retail Consulting Practice at Nomura Consulting, high input prices will hit EV and ICE makers in the medium and long term but demand side growth will give an impetus to EV sales in the short-term.

“From a demand perspective, the surge in fuel prices for now might nudge the fence-sitters to drift towards EVs. However, from the upstream side, value chain players may want to wait and watch before redirecting any capital expenditure commitments immediately,” he says.

Yatin Gupte, chairman and managing director, Wardwizard Innovations & Mobility, is looking to make the most of the expected increase in fuel prices. “The Indian market is cost-driven and if fuel prices continue escalating, we will see the electric two-wheeler graph growing in a positive direction,” he says.

The running cost of an electric two-wheeler is now approximately 30-40 paise per kilometre, making it significantly lower than a traditional ICE two-wheeler, says Gupte, whose company saw sales of its Joy e-bikes touch 4,450 units in February compared to a mere 320 sold in the same month last year.

Hetal Gandhi, director, Crisil Research, says electric two-wheelers offer a wider choice with far less dependence on public charging. Hence, the shift towards EVs is expected to accelerate in the coming months across product segments, including cars. “Fuel, which accounts for around 30 percent of the cost of ownership for a passenger car owner, definitely has a role to play in migration towards EVs,” says Gandhi.

Yet, EV makers will also have to gear up for a host of challenges in the aftermath of the Russian invasion of Ukraine. The war, says Nomura’s Sharma, will have an inflationary effect on battery metals and battery costs, as evident in the case of nickel prices, for instance, which recently touched a 11-year high of $25,575 per tonne on the London Metal Exchange.

The EV supply chain, which was already battling increasing prices (battery metal prices hiked the cost of nickel-manganese-cobalt batteries by 124 per cent over the past 12 months), shortage of semiconductors and high energy input costs, is now also likely to face higher logistics challenges as well.

Such an increase in costs could adversely impact the bottom line of manufacturers and component suppliers, and may compel them to pass on the costs to consumers as they operate on wafer-thin margins today, says Sharma.

EV firms are only too aware of the impending crisis. Wardwizard’s Gupte says his firm is working closely with vendors and dealers for procurement of raw materials, batteries, etc. “If the war continues, then the EV industry will also get impacted,” he admits.

As part of its multi-sourcing strategy, the company is developing an EV ancillary park in Vadodara, Gujarat, to facilitate essential parts manufacturing under one roof, which will include chargers, batteries, motors and chassis. The park will hopefully cushion the blow of raw materials supply for EVs arising from the ongoing war in Ukraine, says Gupte.

Uday Narang, founder and chairman, Omega Seiki Mobility (which recently signed a MOU with Israel start-up EVR Motors to manufacture a new lightweight motor for its EVs), says the boost in EV sales will come from the cargo sector, especially in the last-mile delivery segment.

With many logistics and e-commerce companies committing themselves to go electric, there is good demand already happening for three-wheeler EVs. “This is why we are increasing capacity at our Faridabad facility and also putting up a new plant in Pune. The following fiscal year is going to be very significant. While people say the future is electric, I say the present is electric! With ICE vehicles losing their sheen, the momentum towards EVs will grow even faster,” says Narang.

It will be interesting to see how the scenario pans out in the coming months, but for now there is tremendous anxiety all around on the impact of this war and what it will do to an already fragile Indian economy. With fuel prices tipped to see a sharp price hike, customers are not going to make two-wheeler purchases a top priority at a time when inflation is already burning a hole in their pockets.

EVs clearly will stand to gain from a cost perspective, but the supply chain concerns will worry manufacturers. With the Centre’s fiscal math also expected to go for a toss largely due to high crude prices, it is also a moot point how long the sops for EVs will continue. This will be the ultimate acid test for manufacturers going forward.